NZ described as 'the land without a banking law' in book explaining how to set up your own NZ registered bank for less than US$1,000

NZ described as 'the land without a banking law' in book explaining how to set up your own NZ registered bank for less than US$1,000 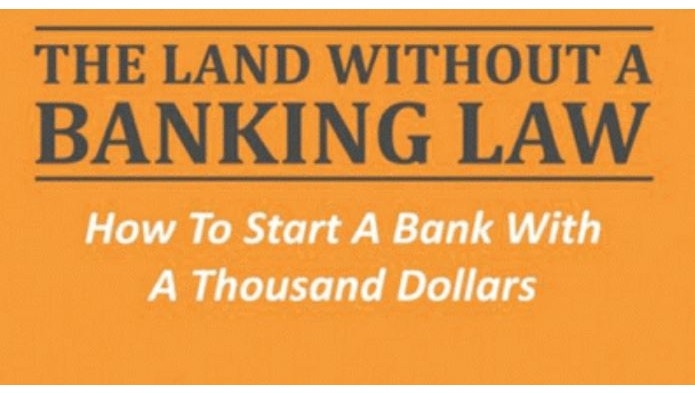 Michael Magnusson, a Swede who touts himself as an expert in establishing offshore companies and has run foul of Panamanian authorities, has published a "how to" book on setting up a company in New Zealand and using it to provide banking services to clients anywhere in the world.

Michael Magnusson's book is entitled 'The land without a banking law; How to start a bank with a thousand dollars.'

The cover (see the foot of this story) features the Auckland skyline.

Magnusson describes himself as an author and consultant, and says he "retired" from the offshore company formation industry in 2013 after having established more than 1,000 financial entities in various jurisdictions for clients.

As Carl Michael Magnusson he featured on interest.co.nz in 2012 alongside Dutchman Remy Swaab in an article by Denise McNabb. The two, associated with a raft of offshore New Zealand finance companies and an online banking platform apparently based in New Zealand but run from Panama, were arrested by Panama’s Special Prosecutor’s Office against Organised Crime for allegedly laundering more than US$100 million as part of an international criminal group. Magnusson's book is available via both Amazon.com and Barnes & Noble for US$35.04.

Here's how the book is promoted on Amazon;

Would you like to start your own Online Bank and offer banking services to clients worldwide? Although the total investment required for setting up a banking business, just as any other business, obviously varies depending on the business model, it is quite possible to form and register a business entity with full legal capacity to offer banking services, for a total cost of less than one thousand dollars, just as the perhaps somewhat controversial subtitle of this book indicates. While there are laws in New Zealand regulating financial activities, there are no regulatory entry barriers as such for the business of banking when services are offered to non-residents only (offshore). This book will teach you how to register a New Zealand business entity online with legal capacity to offer banking services to any number of clients, resident anywhere in the world. Step by step instructions are included. The regulatory framework and upcoming changes to the relevant legislation are explained.

Magnusson's book won't be welcomed by officials at the Reserve Bank or Ministry for Business, Innovation and Employment, nor by Commerce Minister Craig Foss. Criminal activity overseas by people taking advantage of New Zealand's simple company registration system has created problems and embarrassment for this country over recent years. Lowlights featuring New Zealand registered companies include the chartering of a plane to fly North Korean weapons to Iran, allegedly laundering US$680 million a year through a Latvian bank account, committing tax fraud in Britain, and pilfering about US$31 million from US investors via a Ponzi scheme. See all our stories on offshore finance companies here.

Foss told me last September the Government's move to force New Zealand registered companies operating overseas to have a New Zealand resident director appeared to already be having the desired effect of reducing illegal activity by some of these companies. However, the Companies and Limited Partnerships Amendment Bill, which will enforce this requirement, has yet to be passed by Parliament.

Of Magnusson and his book Foss told me, via his spokeswoman, that all his New Zealand registered companies have been struck off, with the most recent removal occurring in 2012.

"The Registries Integrity and Enforcement Team at the Companies Office continues to monitor the filing activities of Mr Magnusson and his known associates," Foss said.

“We are progressing a number of changes to strengthen our registration regime. We are making changes that will boost the Registrar’s powers and will require New Zealand companies to have a resident director. The Financial Markets Authority will also have the power to refuse a financial service provider’s registration attempt if considers it a risk to the reputation of our financial markets. The Government is committed making the necessary changes to ensure New Zealand’s reputation is not damaged," added Foss.

As for the Companies and Limited Partnerships Amendment Bill, it's at the committee of the whole house stage (between the second and third and final reading) with Foss keen to progress it as soon as possible, his spokeswoman said.

The book, parts of which are available online, does contain an element of bitterness. Magnusson complains about "anti-offshore bloggers and would be journalists" who seem to believe "the only reason one could possibly have to establish an international banking business in New Zealand would be to commit fraud or to launder funds from criminal activities." He also says the people running New Zealand's Financial Service Provider Register "appear to have independently decided that the legal requirements for FSP registration, as per the FSP Act, in their mind are far too relaxed... Hence the FSPR has adopted a whole new role; that of hindering certain applicants from complying with the letter of the law."

The book also features unflattering quotes from famous people directed at New Zealand including this from Thomas Jefferson Scott; "Terrible tragedy of the south seas. Three million people trapped alive." And this from Sir Clement Freud when asked his opinion of New Zealand; "I find it hard to say, because when I was there it seemed to be shut."

And here are some excerpts from the book;

"New Zealand remains an attractive jurisdiction for setting up offshore finance companies both for regulatory and tax related reasons, paranoid authorities or not. There are literally hundreds of offshore providers on the internet offering New Zealand finance company incorporation services and FSP registration."

"So why would you want to start your own bank? The reasons vary but many of my clients throughout the past two decades were already managing client funds in one capacity or another when they came to the realization that starting their own bank legally could help them increase their profits significantly."

"I have helped to establish more than 1,000 financial entities through the years and have yet to see two identical business models."

"The purpose of this book is to provide the reader with the knowledge required to incorporate a New Zealand company online and to get the same registered as a bona fide Financial Services Provider with the legal capacity to offer banking services to any number of clients resident anywhere in the world. The total investment required for setting up a banking business, just as any other business, obviously varies depending on the business model.  It is however quite possible to form and register a legal entity with full legal capacity to offer banking services, for a total cost of less than one thousand dollars, just as the perhaps somewhat controversial subtitle of this book indicates."

"According to the law anyone offering financial services in or from within New Zealand is required to register as an FSP, whether as a company or as an individual. Registration is a legal requirement, not a privilege. If you were to offer financial services on the internet from your Mom's basement in an Auckland suburb, to customers exclusively based in Timbuktu without leased commercial premises and without employees, you are still required (and should thus be able) to register as an FSP."

"The actual qualification requirements for FSP registration are so basic that pretty much anyone 18 years or older would qualify."

I heard about this , its actually a gap in the law that someone has seen , and we could tidy it up quite easily .