RBNZ's McDermott says RBNZ has revised up its estimate of potential GDP growth over last six months to a peak of 2.8% in 2015 from 2.5%

RBNZ's McDermott says RBNZ has revised up its estimate of potential GDP growth over last six months to a peak of 2.8% in 2015 from 2.5% 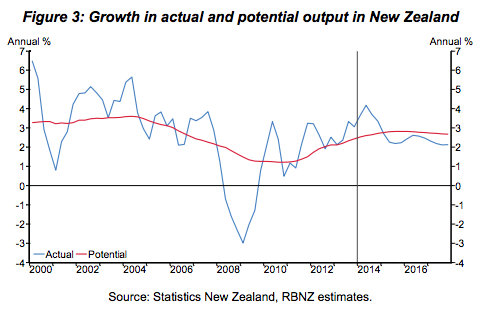 Reserve Bank Assistant Governor John McDermott has delivered a speech detailing the Reserve Bank's focus on measuring potential GDP output growth and how that fits into its monetary policy thinking, given any actual economic growth that was faster than potential output growth tended to generate inflation.

He said the Reserve Bank's estimate of potential output growth had been revised up over the last six months to a peak of 2.8% in 2015 from 2.5% previously because of more investment in productive capital than previously thought, higher forecast investment because of stronger business confidence, and higher labour supply due to stronger net migration.

However, McDermott reiterated that the bank remained wary of actual growth being stronger than potential growth, which generated inflationary pressures and meant the Reserve Bank needed to return interest rates to more neutral levels.

McDermott pointed to changes in output growth potential over the decades, ranging from a low of 2.1% in the 1980s to almost 4% in the 1960s, due to societal changes, different government policies and external conditions.

"The Reserve Bank will typically respond by increasing interest rates in order to moderate demand pressures in the first case, and by reducing rates to stimulate demand in the second," McDermott said in a speech to the Wellington Chamber of Commerce.

"Growth in actual output is expected to have peaked at around 4 percent in the year to June, driven by strong construction spending, increasing net immigration, high export prices, and low interest rates," he said.

"With the economy growing at a faster rate than potential output, inflationary pressures are expected to increase. In this environment, it is important that inflation expectations remain contained and that interest rates return to a more neutral level."

These comments were similar to those made by the Reserve Bank in June when it released its latest Monetary Policy Report and increased the Official Cash Rate to 3.25%. The New Zealand dollar was little changed after the release of the speech. The Reserve Bank's June quarter monetary policy statement included a growth potential forecast for a rise to 2.8% by 2016.

"Assumed trends amongst labour market cohorts, combined with demographic projections, suggest that a structural upward trend in the participation rate will continue in New Zealand through the remainder of this decade," he said.

McDermott then looked at 'fundamental' factors determining output potential over the long term, including changes in technology such as the advent of refrigerated shipping in 1882 when the Dunedin sailed to England.

"In the modern era, further improvements in transport infrastructure and advances in information and communications technology, used effectively, have the ability to dramatically reduce distance to markets," he said.

McDermott said the best contribution to sustainable long term growth the Reserve Bank could make was by keeping inflation low and stable.

Unduly easy monetary policy settings can boost economic growth for a time, but was unlikely to be long lasting.

"Past experiences suggest that reducing inflation materially usually involves a greater slowing in activity than the boost to growth enjoyed as inflation increased," he said.

"There is evidence to suggest that for advanced economies the threshold at which inflation becomes negative for long term growth may be as low as 3 percent."

JP Morgan economist Ben Jarman said the speech was a natural follow-up to the hawkishness in the bank's June Monetary Policy Statement (MPS).

Jarman pointed to McDermott's comments about how high inflation -- even as low as 3% -- could harm long term growth prospects.

"In one sense this helps explain the RBNZ's hawkish stance, as they believe that while the economy is on a benign growth/inflation trade-off for now, any effort to 'bank' that by being more relaxed about inflation would eventually cause a move above target," Jarman said.

(Updated with more detail, including potential GDP in both short and long headlines, reaction)

The hiking rhetoric continues as a strong backlash is predicted and as housing prices fall in provincial areas and as wage earners receive no increases from the Rockstar economy but face mortgage increases.

ZZ - I think one economist in a foreign location named NZ a rock star and yet the little lambs on this side of the Tasman quote it all the time as if its the gospel...hardly anyone economist, policitan or even the RBNZ agreed with that so why is it even worthy of mentioning ?

Wow , now we areally are cooking with Gas ( in the Urban Dictionary context )

What inflation?
And how will OCR hikes suppress council rates and electricity prices?

And how did OCR cuts increase council rates and electricity prices?

most councils are deeply in debt (many to Westpac).  Increase the OCR, their increase rates go up...the money to cover this comes from?  (hint: its not management wages)

Electricity is similar many projects are 10 and 20 plans, and have borrowings that are exposed to the OCR, also the spot pricing payments are normally done with a current account, that attracts interest each month)

And how did OCR cuts increase council rates and electricity prices? (hint: it didn't)

And how will OCR increases suppress council rates and electricity prices? (hint: it wont)

Indeed and that is the point or risk with a 2 (or more) speed economy.  The bank economists see some ppl getting pay rises but somehow seem to ignore those who get none or even -ve to compensate for those well above average.
So after 4~5 years of little wage increases and that showing up as low inflation just where is this rapid rise coming from? or even any rise?
regards

considering the Kiwi$ is still rising, and the gDT is still sliding, and interest rates are biting then we'd have to say RBNZ are completely bonkers...   or they're still taking information from the butterfly's wing of rising costs from earlier interest hikes (the only 4 things that I know of that went up last 6 months were my electricity rates, my interest rates, rents, auckland house prices)... that's hardly GDP that signifies economic growth!!!

with zero interest rates in the west and bonds not looking good, Warnings abound of stocks due for correction, We could see stocks selling down and into the only place left to go with any return  $NZ. New High coming?

well we just hit 0.88 USD again.   When is the RBNZ going to step in to protect our export economy???

Has the World Bank designated NZ to be a High Interest country for the benefit of others?
We have an ex-World Bank  now RBNZ Governor.  Is it unfashionable to be patriotic now?

No, i think it would be the opposite if shares fell it would be for a reason and as NZ is seen as a risk currency a low. So the cheap money would flood back to the USA just like its exiting the BRICs and into US treasuries I assume. Meanwhile we could get to 0.5 and the resulting "inflation" costs from petrol hikes etc would be yet another nail....
Bonds are actually supposed to act as "cash like" things when close to maturity I believe, they also wouldnt be subject to an OBR event.....like a deposit is.
Place your bets.........
regards