The gold market has a tough quarter in June according to the World Gold Council. Russian buying one of the few supports

The gold market has a tough quarter in June according to the World Gold Council. Russian buying one of the few supports 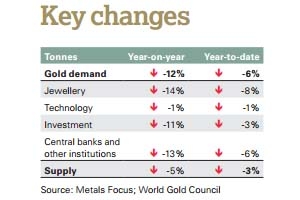 It's been a tough time for investors in the yellow metal.

However, committed investors would have found the last quarter a good time to add to their holdings.

Prices were weak. Demand was low.

The global situation to June 30 has been released in a report released by the Gold Council today.

• Jewellery demand was down -14% year-on-year mainly because key markets in India and China pulled back. In fact demand was at its lowest level since September 2012.

• Hedge funds are still net sellers, quitting another 23 tonnes in Q2. That makes a total of 1,096 tonnes they have sold since December 2012.

• The only buyers were central banks, not all central banks but especially those from countries of the former Soviet Union. They bought a net 137 tonnes. Goodness only knows what would have happened to prices if Russia, Kazakhstan, and Belarus hadn't bought their 82 tonnes, supported by Jordan's 13 tonnes in the first half of 2015. How long the Russian buying can continue given the sharp decline in the ruble is a worrying question.

Low prices also discourage sellers, especially those offering the metal into scrap markets. Only 251 tonnes were offered in the June quarter, the lowest level since September 2008.

You can find current prices for gold here. Scrap reference prices are here.

Sign up for our weekly precious metals newsletter here. It is free.

Here are the Demand trends (in tonnes of gold globally sold per quarter): 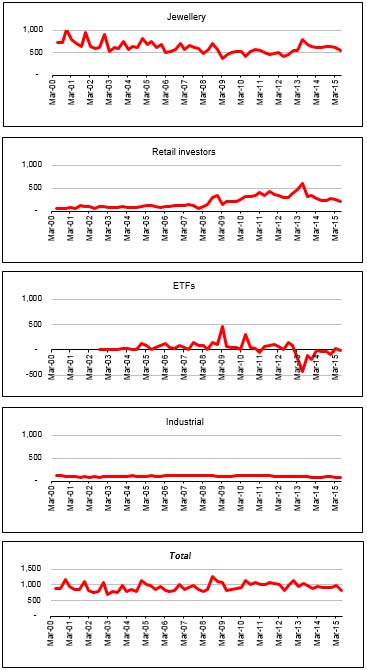 Here are the Supply trends (in tonnes of gold supplied globally per quarter): 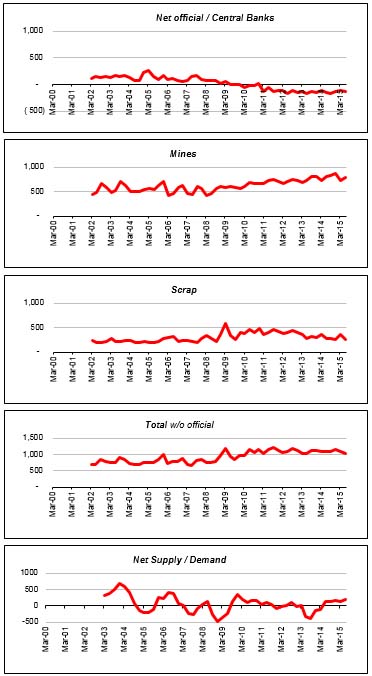