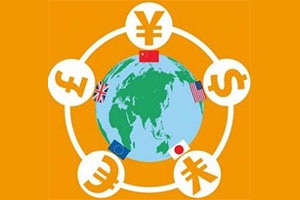 Derivatives contracts held by New Zealand's major banks surged in value by 38.5% in the year to September 30, 2015.

At $1.2 trillion, ANZ holds just over half all the interest rate contracts with a big annual jump in interest rate swap contracts recorded year-on-year. ANZ also holds the biggest slice of the combined $430.9 billion of exchange rate contracts, although ANZ's share dropped 6% to $209.713 billion.

All up, ANZ NZ had $1.4 trillion worth of derivatives held for trading as of September 30 last year, which was the end of the bank's financial year.

An ANZ Bank New Zealand spokesman confirmed neither ANZ Australia nor ANZ Group derivatives are run out of New Zealand, thus the figures all relate to ANZ NZ.

"Our derivatives exposure reflects the size of our local balance sheet and the size of our customer businesses locally and offshore. Banks’ exposures will also reflect the booking model each bank uses, particularly for large derivatives, and whether they book them offshore or through the NZ branch, and this varies from bank to bank," the ANZ NZ spokesman said.

ANZ NZ, the country's biggest bank with total assets of $155.8 billion, says its use of derivatives and their sale to customers as risk management products is an integral part of the bank's trading activities. Derivatives are also used to manage ANZ NZ's own exposure to fluctuations in exchange and interest rates as part of the bank's asset and liability management activities. 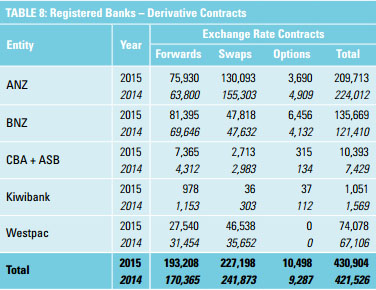 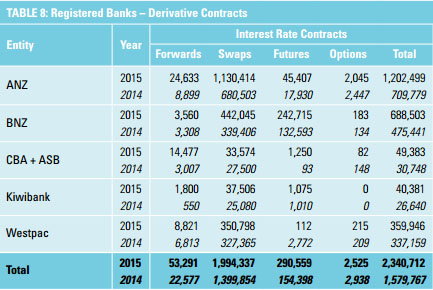 In anybody's opinion, what does this mean? Is Kiwibank the safest bank in the event of a financial meltdown? Help!

An exporter or importer for example may hedge themselves to protect against the exchange rate moving against them (thus form a derivative forward contract to lock in a future exchange rate based on today's price), or ditto for interest rates, but the gross bank amounts of open contracts don't tell you anything about the creditworthiness of their customers.

the only thing kiwibank has in its favour is it government owned.
so it will get bailed to some extent depending on the party in office
if national they will say see it is foolish to own a bank and sell it
if labour they will bail it and blame national for bad management

Depositors need to know the status of counterparty positioning. Recent volatility in term swap rates makes for much collateral call demand for those on the wrong end. The relentless, trend of the bank customer paying fixed in a one way downward interest rate market always ends in tears.

The compression of quoted swap yield premiums over equivalent NZ government debt maturity yields is cause for great concern. Read more, including the links for better comprehension of the liquidity concerns attached to such an outcome.

What of business booked by the parent else where.
Or done on behalf of for a fee.
Eg. Remember those pref share deals. It was the parent using the NZ tax base.

So, their ratings are going down ?

ASB's wholesale funding activity must be quite small relative to the others given their market share would be higher than suggested using the derivatives data.