The OECD Better Life Index finds that New Zealanders are the seventh most satisfied with their lives, out of the 38 member countries

The OECD Better Life Index finds that New Zealanders are the seventh most satisfied with their lives, out of the 38 member countries
1st Jun 16, 9:44am by Guest

New Zealand performs well in many measures of well-being relative to most other countries in the Better Life Index.

Money, while it cannot buy happiness, is an important means to achieving higher living standards. In New Zealand, the average household net-adjusted disposable income per capita is lower than the OECD average of USD 29 016 a year.

In terms of employment, 74% of people aged 15 to 64 in New Zealand have a paid job, above the OECD employment average of 66%. Some 80% of men are in paid work, compared with 69% of women. In New Zealand, around 14% of employees work very long hours, more than the OECD average of 13%, with 20% of men working very long hours compared with 7% of women.

Good education and skills are important requisites for finding a job. In New Zealand, 74% of adults aged 25-64 have completed upper secondary education, close to the OECD average of 76%. This is truer of men than women, as 75% of men have successfully completed high-school compared with 73% of women. In terms of the quality of its educational system, the average student scored 509 in reading literacy, maths and science in the OECD's Programme for International Student Assessment (PISA). This score is higher than the OECD average of 497. On average in New Zealand, girls outperformed boys by 5 points, lower than the average OECD gap of 8 points. 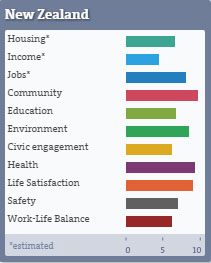 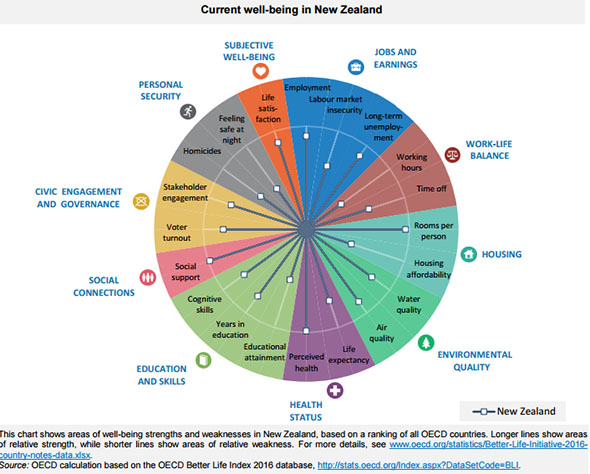 This commentary appears in the latest update of the OECD Better Life Index. The full review of New Zealand is here.

Wow , this is really cool , we should stop complaining .

We are very lucky compared to others. That why people continue to move here. I see that South Africa is bottom of the list which is a shame to see.

Being on top of or near the top of these type of indexes is actually very important for the average NZer's sense of self worth. Politicians and the media love them too.

So 38 countries are members,where are the others or is the OECD just another name for The Taker of Surveys.

So what are the top 3 countries Switzerland & scandinavian countries ?

National can't be doing such a bad job then? It would be a shame to jeopardize this by changing things don;t you think?

We aren't number 1 so National is doing a terrible job. Also the items that scored low are not good. Housing affordability, working hours, job insecurity etc. Then look at people not feeling safe at night and homicides those are signs that something is wrong with the country.

For an allegedly right wing party they aren't working on things that are important to their beliefs.

Seriously, not being number 1 at everything is "terrible"? High expectations are all very well, but really? Were you top in every exam you ever took? Did you win every game you ever played, every race you ever ran, are you the most intelligent person and the best dancer in the world, do you give more to charity than anybody else, is your house the cleanest and best decorated, have you the world's smallest carbon footprint?

Are you terrible because you can't answer yes to every one of these? I do hope you don't have children ...

It's also a jab at the current Government that's claiming everything is wonderful as if every problem was solved because the Prime Minister denied they existed. Some people are buying into the fairytale told by the National Party.

One thing to look at more seriously is that quality of life measures are being used because GDP growth is no longer an effective measure. Those low scores are bad.

The Government is not claiming everything is wonderful. They are spending vast amounts of money, and doing a great deal more to address the issues than the last Government ever did, precisely because they know that everything is not wonderful.

They are, however, claiming that things are not as bad as the opposition parties and the media continually try to make out - but somehow never quite manage to substantiate with an example that is able to stand up to five seconds' worth of examination.

There's been a lot of clown car action with respect to trying to make an example of the Auckland market. It's as if the opposition have no ability to research or investigate effectively to capitalise on real issues.

It really depends on what side of the income divide you fall on.

Things are going well for the upper-middle classes but at the other end a lot of people are really struggling and unhappy. The sad thing for them (and kind of ironic) is that their lack of participation in the democratic process (or general lack of political awareness and knowledge about what each party represents) leads to continuation of the status quo and their continued sliding towards poverty. Turkeys and Xmas.

So......the devil is in the detail....what was the methodology? Who did they interview and how?
If the participants are typically educated middle class people the countries like NZ where there is greater wealth disparity will get artificially elevated results versus countries where there is less disparity

Don't get me wrong, life in NZ of course is not all doom and gloom! But you need to look at these kinds of surveys critically and dig beneath the 'headlines'

You'll find the short version of the answer here.
http://www.oecdbetterlifeindex.org/about/better-life-initiative/

This is the early days of this index. There is a push to improve actual quality of life rather than just GDP growth as an artificial indicator. This will give Government's tools to measure quality and address it, of course this index is not widely supported. If people like the concept they need to tell their MPs.

I'm sitting on the fence at the moment until I have more time to consider the quality of the index.

Thanks Dictator. You get my point though?

Thanks Dictator. You get my point though?
I've read that and I see the survey is web-based. Bad start. There's a whole lot of people who won't be having their say.
I stand by my view it is distortionary

Unfortunately the statistics are going to be stratified. This might change in the future but you have to treat it like any other statistic the way that you are.

So, I'm sure if it was a balanced survey method the USA wouldn't rate so highly either, given their inequality.
garbage