English names his first Cabinet; Bridges and Adams promoted; No successors yet to McCully and Parata in Foreign Affairs and Education as they will stay until May 1; Goldsmith and Upston promoted to Cabinet

English names his first Cabinet; Bridges and Adams promoted; No successors yet to McCully and Parata in Foreign Affairs and Education as they will stay until May 1; Goldsmith and Upston promoted to Cabinet 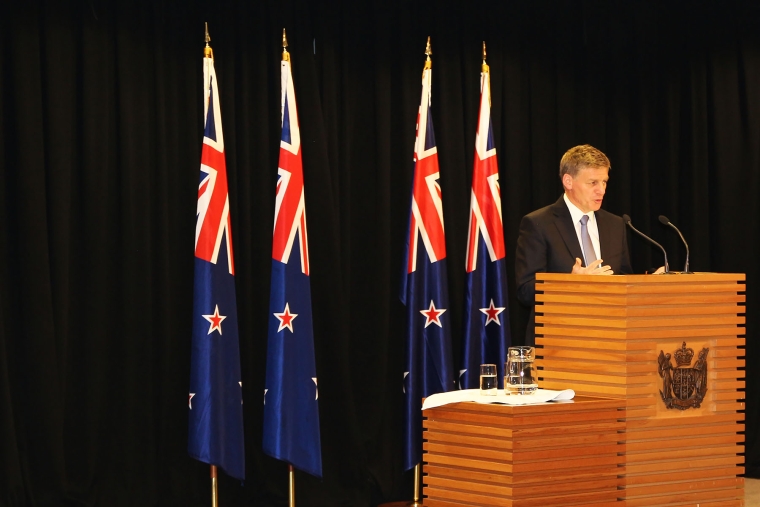 Murray McCully and Hekia Parata will stay on as Foreign Affairs and Education Ministers respectively until May 1, with no successors named, although English said Associate Minister Nikki Kaye was likely to step up after May 1. He did not name a successor to McCully. Parata and McCully will transition to the back-benches from May 1, which would avoid a byelection for McCully as it would be less than 6 months before the next election, which English confirmed would be in the second half of next year.

English told a news conference he did not want to put Kaye immediately under pressure as she was still recovering from breast cancer. He said he was still assessing the Foreign Affairs portfolio and wanted more time to understand the role. English denied the risk of a byelection in East Coast Bays factored into his thinking.

English elevated Bridges to the Economic Development portfolio vacated by Steven Joyce, who is stepping up to be Finance Minister and Infrastructure Minister. Bridges will retain the Transport portfolio.

He also elevated Amy Adams up the cabinet rankings and gave her the Social Housing and Social Investment portfolios, in addition to her current role as the Justice Minister.

"Simon and Amy are two high performing Ministers who are ready to take on more responsibility. I am confident they will work well with Finance Minister Steven Joyce," English said.

Immigration and Revenue Minister Michael Woodhouse was also elevated up the rankings to 9 from 16, and will become the ACC Minister. He loses the Revenue portfolio.

Unsuccessful leadership challenger Jonathan Coleman retained his Health and Sport and Recreation portfolios, although his ranking slipped to 7 from 5.

Fellow challenger Judith Collins lost her portfolios of Police and Corrections, but picked up Revenue, Energy and Resources and Ethnic Communities. Her ranking in cabinet dropped to 16 from 13.

Nick Smith's cabinet position was lowered to 15 from 11 and he retained the Environment, Building and Construction portfolios, but lost the Housing title. English decided not to allocate housing to a minister. Amy Adams will have the Social Housing Ministry.

Ngaro, Mitchell and Bennett get ministries

David Bennett was given the Ministries of Veterans' Affairs and Food Safety, but will be outside cabinet.

Jo Goodhew, who had been Minister for the Community and Voluntary sectors, loses all her ministries and returns to the back benches.

Labour Deputy Leader Annette King, who said yesterday she would stand aside as Wellington South MP to become a Labour list MP so as to allow Andrew Little to win the seat, said the Cabinet reshuffle was not the rejuvenation promised by English.

"It’s a combination of the conservative, vindictiveness and mateship," King said.

“His rejuvenation is one new Minister in Cabinet and three Ministers outside Cabinet, two of whom, Bennett and Dean, have been in Parliament 11 years already," she said.

“And he’s demoted his rivals Judith Collins and Jonathan Coleman. Bill English denied there was a housing crisis and now he doesn’t even want to have a Minister of Housing. It’s the first time under a National Government there has not been a Minister of Housing," she said.

“National has managed to abolish the problem because they’re so embarrassed about their lack of action. He’s kept one of his best mates, Nick Smith, in charge of Building and Construction, stripping away the title of Housing Minister. But that doesn’t change a thing really. The troika of English, Paula Bennett and Smith have failed to help young New Zealanders into affordable homes."

Has not allocated housing to a minister. Far out, probably the number one issue in this country and he ditches the ministry. Cup of cold sick, anyone?

Quite so, unless he's taking on this crucial role himself. The chances of that? Slim to none....

It probably is clear indication that housing in NZ is a major problem, in terms of the price people need to pay to buy a house.

It is probably going to be the one portfolio that noone will want, as anyone holding it is on a hiding to nothing, if they want to progress upwards. They need to make some MAJOR decisions on housing if they want to get back in again. One of those should be blocking foreign buyers from buying any existing housing stock, and requiring them to build. Maybe also looking at leasehold options for foreign buyers and investors.They do this in some overseas countries.

Not looking too good for any of that to happen, I just hope the people of this country take very special note of that.

Not a portfolio anyone would want to inherit. The odds are stacked against the very best. Too many people to really disappoint and powerful interests ready to cut your legs off.

Yes, hard to believe. In the meantime, Goldsmith gets promoted for being a good boy (Epsom) and Upston for helping JK fudge the overseas buyers info. Meritocracy anyone? I thought not.
JK did a poor job of succession planning and just adopted his default position of 'do nothing'.
Poor old Bill's picked up the poisoned chalice. Unfortunately, sometimes it doesn't matter how capable one is, either your timing isn't right or one simply doesn't have the persona. Both attributes that JK had in spades albeit his was a victory of style over substance. As for the timing, when the brown stuff hits the fan next year, BE's going to wish he was back in downtown Dipton.

Yes, but I still like Bill. He seems to have a good grip on the mechanics of the job. Not so good at grandstanding on the world stage or entertaining the media, perhaps, but he seems to have a sense of what he is actually aiming for and some ability to actually get there. He may surprise us.

But not necessarily in a good way, already demonstrated his willingness to pass the buck and completely deny the government has any responsibility for the housing mess. Not a good start.

You’ll remember how Bill ‘Double Dipton’ English was caught claiming the out of town allowance for living in his family home in Wellington. It would have been a sacking offence in any other government, and probably for any other minister in this government too. Read more and more

SH, the Headhunters must be dancing in their cells: http://m.nzherald.co.nz/nz/news/article.cfm?c_id=1&objectid=10553766 http://www.stuff.co.nz/sunday-star-times/1401088/HOLMES-TO-BENNETT-Wash…
And, Bill the Kid will get a severe lesson in demographic arithmetic from the Grand Master Winston next year if he fiddles with National Superan.

Good to see Collins out of Police and Corrections. [Actionable smear deleted. Ed] Revenue and the rest not much better.

They're not leaving Smith in charge of housing, surely??? Edit. They haven't. That's something, I suppose, but he still has Environment and Construction to bollocks up. Upston's a waste of space.

Wouldn't trust any of them to run a bath, really.

"English is currently defending his decision to ditch the "housing minister" title; he says if there are questions about soaring house prices in Auckland, for instance, those questions should be addressed to Auckland City Council not the government."

Yeah, because failure to appropriately regulate immigration, or restrict foreign buyers or balance the incentives away from blowing stupid bubbles in residential real estate and towards productive business are all to do with the Auckland City Council. They must think we just fell off the back of the Stupid Truck.

We did, we voted for them 3 times.

What you mean "we" Kemosabe?

I personally have never voted National, and never will. Voted Labour 3x. And next election I'm voting for Winston

I'm no fan of Collins but the smug manner in which English has demoted her smacked of petulant schoolboy.

On top of that he's managed to "out-crisis-deny" Key by failing to appoint a Housing Minister considering that is probably the single most important issue facing NZ.

I suspect the smugness maybe short-lived. Has sword, ready to fall on.

It is called 'stamping your authority' , has to be done.

Like Schrodinger's cat, Parata, Smith, McCully and Collins and the housing crisis are both 'here' and 'not here' at the same time.

Bill English reveals, in addition to his skills in Latin, English and Economics, a grasp of advanced Physics. Channelling his inner Einstein, our new PM will be trying to create as much v as possible to win the fourth term as the parliamentary National Party obviously doesn't have a lot of m.

That's a good analogy. Me, I'd love to see some 'spooky action at a distance', or even some plain old Newtonian action, on NZ's housing and population issues.

I think the reason we will see nothing on housing is that for every action there is an equal and opposite reaction: house prices down = votes defecting to other parties up.