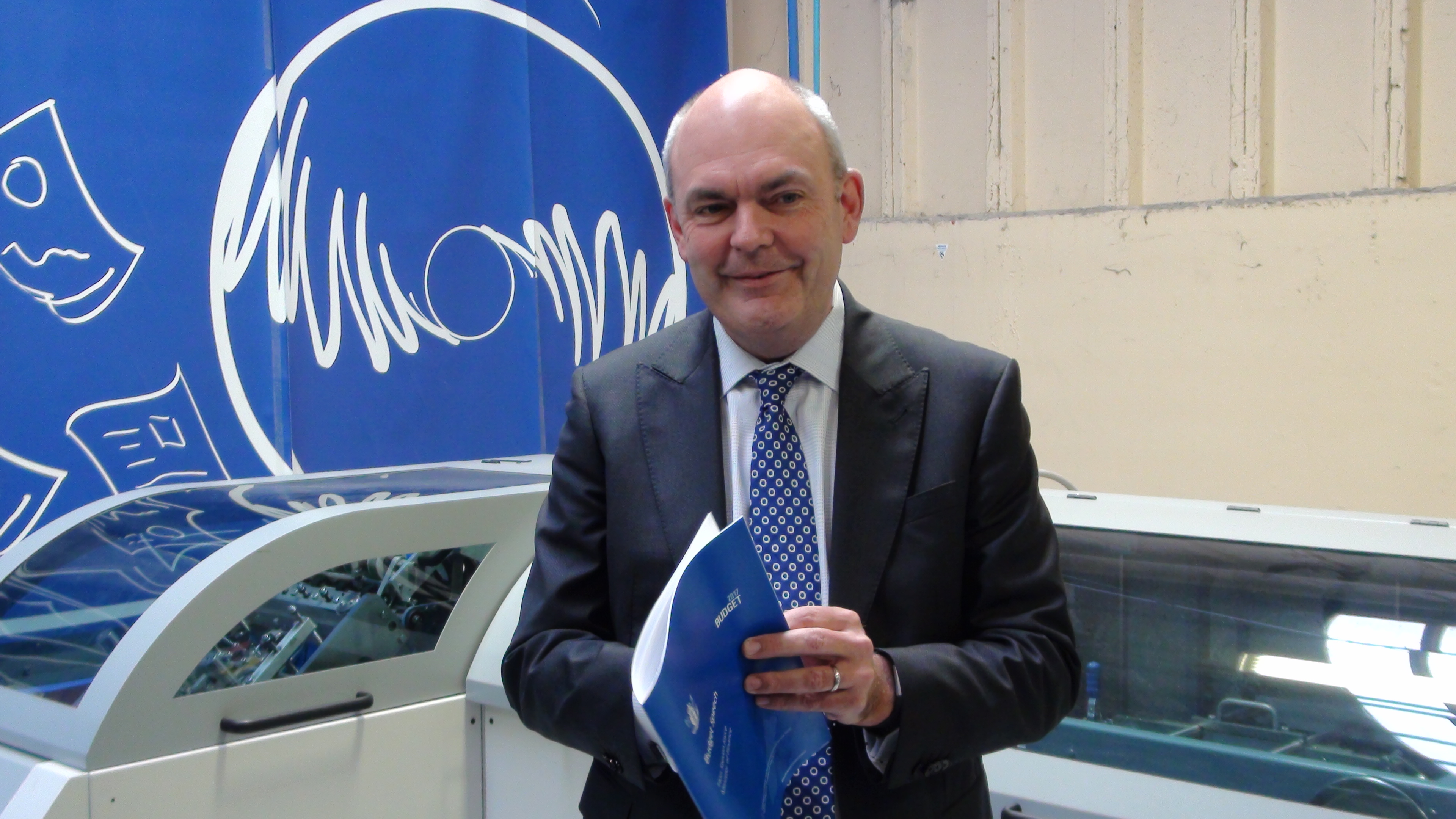 The Wellington rumour mill is in its typical frenzy ahead of Thursday’s Budget, but Finance Minister Steven Joyce is playing down the government’s ability or even desire to dish out an election year ‘lolly scramble’.

One report Tuesday morning claimed the two bottom income tax thresholds will be raised slightly, alongside boosts to Working for Families payments and the government accommodation supplement – a much rumoured ‘families package’ that could mean well over an extra $20 a week for low income earners.

Indeed, one rumour Interest.co.nz heard twice on Tuesday morning was that the work needed on such a package had delayed the final touches from being put on the Budget compared to previous years when Bill English controlled the Treasury purse-strings.

Steven Joyce and other Cabinet ministers have made a raft of ‘pre-Budget announcements’ including on Auckland housing, primary school classrooms, police numbers and Pharmac funding. But it’s the potential families package that has garnered the greatest attention, not least because it is an election year.

Joyce and Prime Minister English have started hinting that the government could give something back to ‘regular’ New Zealanders who had ‘helped’ the government get its books back in shape.

“The people of New Zealand have actually worked very hard to turn the government’s accounts around, and turn the economy around,” Joyce said Tuesday morning as he and a media pack visited the Budget printers in Wellington’s Lower Hutt.

He was not giving much away but did say “the opportunity to do something for family incomes,” was on the table “if we get room.” Improving public services, infrastructure investment and government debt reduction were also vying for public money, he said.

Thursday’s Budget will not be a “lolly scramble” and those expecting an “election year” Budget were getting ahead of themselves, Joyce said. He added that he was not delivering the Budget with his National Party election campaign manager's hat on.

“Politically there’s no pressure on me wearing those two hats because, actually, it’s about doing what we think is right [on Budget day], and then the public will decide whether they think it’s right [on election day].”

Joyce described himself fiscally as “quite conservative” and cut from the same cloth as English – he did accompany English on the government’s previous Budget days as an Associate Finance Minister.

“There’s not massive amounts of headroom. I think some people in recent weeks got a little bit carried away about what they think’s possible,” Joyce said. “The amount that we’re in surplus is not massive compared to the overall government investment.”

Nevertheless, the National-led government has dished out Budget day surprises in recent years, with the $25 per week boost to benefits in 2015 one of the larger policies that hadn’t been pre-announced.

A larger-than-expected government operating surplus of about NZ$1.5bn for the current year is handy, although the full costs to the government from the Kaikoura earthquake have still not been incorporated into forecasts.

Joyce referenced Reserve Bank picks for at least another four years of positive economic growth on the back of six years of expansion – indicating a decade of growth. “That would be a good achievement for New Zealand, particularly in the context of other parts of the world and what they’ve been dealing with,” he said.

“We’ve been in the same environment but there’s no doubt over the last few years we’ve been travelling better than most of the countries we like to compare ourselves with.”

Meanwhile, he was asked what was different this Budget to Bill English’s first as Finance Minister eight years ago.

“In 2009, when Bill English stood up for his first Budget, the Treasury [was] predicting a decade of deficits. We had to make significant changes both to resolve the GFC [Global Financial Crisis] and then the Christchurch earthquakes,” Joyce said.

“What we’re seeing now – we’ve had nearly six years of continuous growth, we’re starting to get the books above water and those are good things,” he said.

“We were looking at a decade of deficits and debt was continuing to rise to over 60% of GDP. So yeah, it was a pretty significant challenge that we inherited. I think New Zealanders did realise that and that’s why they encouraged the government to get on top of it.”

“Income growth has been there. It doesn’t look as big because inflation is low. But in real terms we have been seeing income growth over the last six years,” Joyce said.

“The important thing is, firstly the economy keeps growing because the big difference between New Zealand and say, the UK, Japan, Canada, the EU and quite a lot of America, is that we’ve seen that investment growth, job growth and the economy growing. That does more than anything else to help people’s prospects.”

“Income growth has been there. It doesn’t look as big because inflation is low. But in real terms we have been seeing income growth over the last six years,” Joyce said.

It doesn't look as big because it isn't big, Steven. Artificially keeping wages low via mass immigration tends to do that.

"...we’ve seen that investment growth, job growth and the economy growing. That does more than anything else to help people’s prospects.”

And house price growth! Can't forget that Stevey! It's not like the economy is being propped up by debt and selling houses to each other or anything. Would you like to mention the value of our housing stock is 4 times larger than our GDP? Or that GDP per capita is flat lining?

So young Kiwis, your wages are stagnating while house prices and rents are forging ahead. Sorry about your future, eh.

"a families package’ that could mean well over an extra $20 a week for landlords".

They best be careful with selling that one, especially since people woke up and realised that the taxpayer is subsidizing landlords, foreign ones even. I think tolerance for this is at a low.

I hope you're right, I really do, but we can never underestimate the overriding power of ignorance and self-interest.

Not a lot of voters realize that these subsidies help landlords, not tenants.They just see the immediate impact of dollars in pocket.

Exactly, why do landlords need a government handout. They get enough with all the tax free breaks.

Following this thought a bit further I have just been playing with the Working for Families website calculator to see how the system works and the range of assistance available.
http://www.workingforfamilies.govt.nz/calculator/filter.jspa
What becomes immediately obvious is that if you are able to accumulate some capital that could be put towards the deposit on a home you start losing the supplement, and once your savings start getting any where near a deposit you loose the housing supplement completely. In other words, it is a very powerful poverty trap the transfers wealth to the landlords while preventing tenants from ever being able to save for a home.
This is absolutely shocking.
From what I could see it would be relatively easy for a family to receive over $20,000/year in assistance, so the tax payer is also pretty well permanently locked into funding this subsidy to the landlords for ever.
Remember once upon a time, the child benefit could be capitalised and used as a contribution to a home deposit. The present arrangement has almost the exact opposite effect, if not intent. If this sort annual cash flow were to be capitalised then we could easily provide these families with over $100,000 deposit toward a home and the tax payer would be better off. Everybody except the landlords would be better off.
The net affect of all this is that while the recipients are being trapped in a situation where they will never be able to save a deposit and enriching the landlords, the increasing subsidies enable rents to rise and thereby raise property values, putting them even further beyond the reach of the FHB. We are being governed by either complete idiots or very evil people; more likely a mixture of the two with the latter easily influencing the former. One really has to question whether this situation would change if Labour were in power as their philosophy seems to be to just throw millions of dollars into the subsidies and feed the monster, thereby (inadvertently?) making matters worse. They appear to be in the camp of the fools.

Someone needs to come up with a new app / service: an easy, almost self-administering trust into which these families can put some of their assets, so they can get the best of both worlds like the more wealthy.

Your edit has moved your counterargument up one level in Graham's hierarchy of disagreement (https://en.wikipedia.org/wiki/File:Graham%27s_Hierarchy_of_Disagreement.svg), but only as far as contradiction.

>The present arrangement has almost the exact opposite effect, if not intent. If this sort annual cash flow were to be capitalised then we could easily provide these families with over $100,000 deposit toward a home and the tax payer would be better off. Everybody except the landlords would be better off.

My question re this would be: If the taxpayer starts helping everyone accumulate $100k, and we don't address other factors in the property market, won't that simply push up house values by almost that much again? I believe similar things were seen with home start grants etc. in Oz.

Yes you are right. The whole mess needs to be addressed comprehensively if we are to avoid just chasing the problem around and producing a bunch of undesirable side affects.
Actually when you think about it, the need for a housing supplement is a consequence of more fundamental problems and an example of how not dealing with the fundamental problems can send you off on a whole series of off target actions and unintended side effects.

yes I found it insulting. When my son was born we found ourselves living out of savings after the 10 weeks parental leave wouldn't cover the rent alone and my wage at the time wasn't enough since I had to work part time to look after the kid and my partner who was having a rough time.
BUT I couldn't get WFF as we had 10k in the bank. If I had spent it all in booze and Skycity then the govt would have paid me. I know of people who simply withdrew it from the bank and gave it to parents to invest for them while they got govt support.

Wait, what?? You can claim WFF if you've got equity in a house, but with an asset in any other form you're shizz out of luck, can't even save a deposit without penalties and extra hardship? That's outrageously unfair, could have been deliberately and maliciously designed to cut new families out of any prospect of buying their own place. I had no idea, never having qualified or applied. This needs to be more widely known. As if young families trying to get on their feet hadn't been sabotaged enough.

Can anyone trust whet they say

Q: How can you tell a pollie is lying?
A: Their lips move.