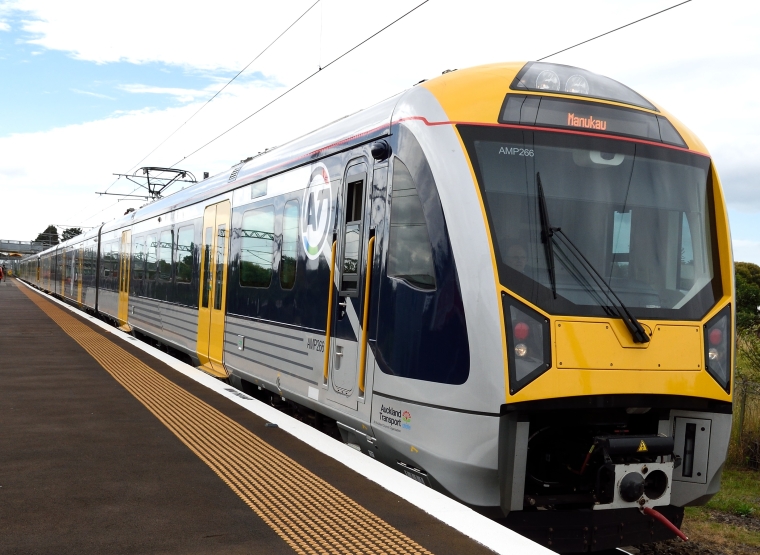 The Labour Party is promising to connect Auckland, Hamilton and Tauranga through a rapid rail network.

It has adopted the strategy of Greater Auckland (formerly TransportBlog) to commit an initial $20 million to establish a passenger service between the centres.

The Green Party made a similar commitment last week.

Labour Leader Jacinda Ardern explains: “If stage one is a success and demand justifies it, Labour will look to invest in stages two and three of [Greater Auckland's] Regional Rapid Rail plan, delivering passenger and freight services travelling up to 160km/h throughout the regions, and south to Rotorua.

“The ‘Golden Triangle’ of Auckland, Hamilton, and Tauranga contains half our population and economy. In the next 25 years, it is projected to gain another 800,000 people – three-quarters of national population growth. It’s time this growing region had a modern, rapid rail service.”

Ardern says: “Labour will boost transport investment in regional projects across the country by doubling the funding range in the Government Policy Statement. This will lift funding available for regional projects from $70m-$140m a year to $140-$280m a year. Our regions are growing rapidly – and our roads are struggling to cope with increased heavy traffic and tourist vehicles.

“In government, Labour will hold an urgent roading summit with councils to work out a shared plan to accelerate projects that would otherwise be delayed or never be built. We will particularly focus on fixing accident blackspots, given the worrying rise in the road toll outside the main centres in recent years.

“The increased funding will be available for all regions and for all transport modes.”

The Green Party has today pledged to provide free public transport for those under 19, as well as people with disabilities on the supported living benefit.

It has also committed to providing tertiary students and those doing apprenticeships with free off-peak public transport.

“We can make public transport free for young people for the cost of just 1 km of one of National's motorways,” Green Party transport spokesperson Julie Anne Genter says.

“We hear from families that the cost of public transport is too high and it forces them to drive, causing pollution and adding to traffic, or stay home. The Green Party will fix that so Kiwis can travel around our cities cheaply and cleanly.

“Average weekly transport costs for families are $40 more now than they were just four years ago, and take up 15 percent of an average household budget.

“Thirty-six percent of morning rush hour traffic is school traffic. Making it easier and more affordable for kids to catch buses and trains will make a big difference to unclogging our roads.

“The Green Card will cost $70 to $80 million each year and will be funded from the Land Transport Fund. This will allow councils to invest more of their own funds to further improve public transport services.

“In addition, the Green Party is committing today to building a congestion-free public transport network in Auckland over the next decade, including light rail to the airport by 2021, a new North-Western light rail line, and beginning work on rail to Albany on the North Shore by 2030.

“Building the congestion-free network will be funded by reallocating existing low-value and non-urgent transport spending.

“We support allowing Auckland to raise a regional fuel tax. We will also work with Auckland Council to investigate part-funding some projects through land value capture.

“The Green Party will announce more transport policies for other parts of New Zealand before the election.”

What about rail Auckland to Whangarei? It would help commuters in the new housing west towards Kaipara and traffic to the only deep water harbour.

Its a disaster for passengers to use this service , okay for heavy goods tho

Labour has a better plan than National. Only building roads will not solve the problem, we will always be playing catchup like we are doing now due to projected population growth. The plan should be bold and look to future proof our cities from congestion and encourage regional growth. The solution is a combination of better public transport and roads otherwise it is a waste of time. Ten years back when I travelled on trains in Auckland there used to be 20 odd people on one train. Now there are millions of train rides in a year which shows if the service is realiable people use it and the cost of building it pays for itself after a few years and is good for the enviroment. It works very effectively around the world will work here too. National makes these announcements 5 weeks from election shows there was no committment to fix the issue till they start sliding in the polls, they had 9 years to do it and did nothing. It is the same as their pledges to build more house, load of crap dont fall for it.

Must keep bubble inflated and with the exit of private investment the taxpayers will need to dig in deep.

I know Jacinda has got them carried away , but have Labour completely lost their sense of reality

The cost of this is

A high speed train to Hamilton is simply not an option ............. we dont have enough people to use it , and the lines would have to be rebuilt from scratch .

Until something better comes along , its Roads and more roads

Can't believe in this coming era of autonomous and electric vehicles Labour are taking about rail.

Roads allow freedom of movement by the people whereas rail puts everyone in a carriage on steel rails and takes them from point to point to a timetable set by a Govt department. Perhaps that's why the left love rail so much?

Funny...such visionary folk as Elon Musk are working on both train and automobile technology, as if they believe there's value in them both. He might be onto something.

Read Musks book a few weeks ago - he's definitely onto something....

...visionary folk as Elon Musk..... LOL. The only thing Musk is onto is (fossil fuel derived) subsidies ... You simply can't run the industrialised world on batteries...

https://medium.com/@GeeeBee/looking-down-the-barrel-d0d7eda9c3b0
"It takes energy to get energy. We have already noted that, presently, oil is the most primary of all energy sources because energy from oil is required to get energy from all the other sources (coal, gas, nuclear, biomass and food, wind, and direct solar, such as photovoltaics)."

Of course oil is required at present, as it's used also in all sorts of fabrications. But what we know is we do need to work on alternatives.

Simply sticking one's head in the hand and saying that because oil is currently required there's nothing we can do except use it all up as we're currently doing then have no backup plan at the end is hardly visionary.

Rick - I think you missed the bit about Oil preceding other energy "sources" .... which is why if you were seriously looking or worried about ENERGY alternatives, you wouldnt be wasting time & resources building electric toys for wealthy "greenies"... Musk's "plan" assumes business as usual on batteries ... Its akin to trying to keep a dairy farm afloat but being limited to having one cow...
As ive said before, you need a REASON to drive anywhere - fossil fuel industrial industry IS the only thing giving us a reason... Pre this you took your horse as far as the village market

yes one just has look at Auckland traffic to see this freedom of movement. This is not freedom, this is enslavery....yet we keep signing up for more of the same.

"driverless cars" That is an interesting Q actually, I suspect its a Q of scale.

Timetables? yet most employers will expect you to be in work by a set time so a train time table isnt much of a biggee considering other timetables.

"left love rail" or maybe they can think, unlike some.

To address the last line first. Its not a Q of better, its a Q of no choice. a) We are at peak oil and hence fossil fuel is going to get more expensive in the future b) climate change, we have to move to zero NET carbon emissions so its more of we have to move to something else we have no choice for better or worse.

I think you are wrong on the lines having to rebuilt. From what I read all they need to have is some stations added, electrification and some rolling stock. If you have a URL correcting this though I'll go read with interest.

cart and horse. There are a number of people I know live in Hamilton and commute by car, a train would make their life easier and cheaper.

You appear to be thinking short term and self centric only, this isnt much use to our children and grand-children.

This is actually a great policy and well thought through. However, it isn't actually Labour's policy its Greater Auckland's policy.
The issue though is the money - what will Labour cut in order to fund this?

Or can they justify it as a "road of national significance" ie necessary?

Interesting that few want to pay more taxes, yet many want more and/or better services.

Maybe they could appoint "A transport Supremo".

high speed rail is were the rest of the world is going. Live in Hamilton, work in Auckland and every weekend go to Tauranga for the beaches. Or are we going to keep adding lanes onto the motorways? The southern motorway (four lanes each way now isn't it?) is chockers from 6am til 7pm. Add another million people to Auckland's population all driving their cars to work, taking the kids to and from school, it doesn't stack up.