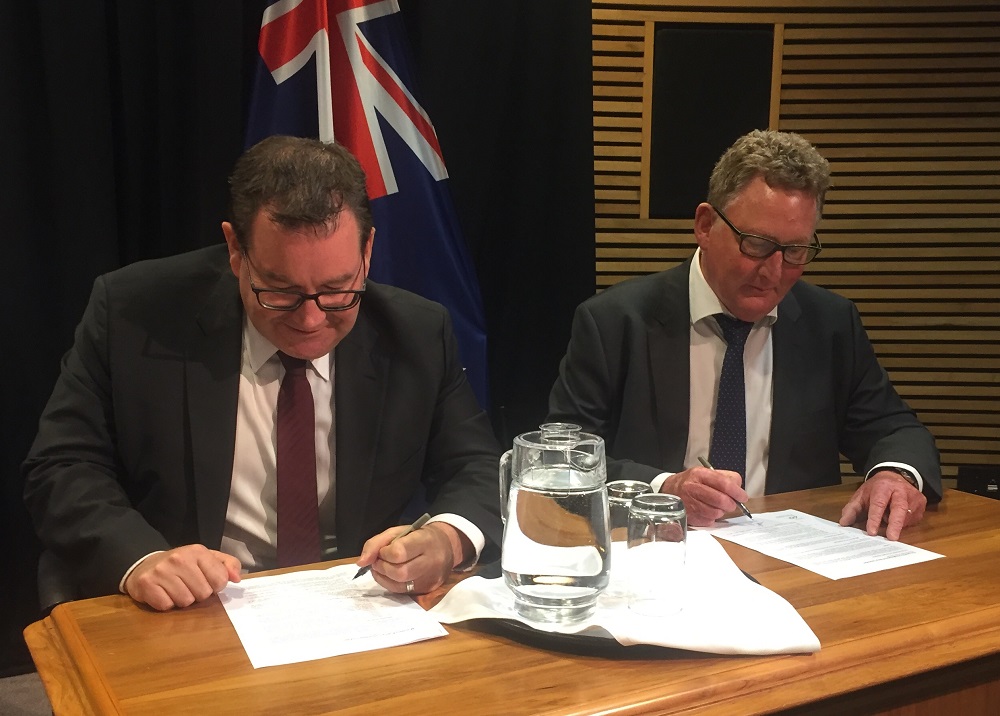 Robertson and RBNZ Governor Adrian Orr on Thursday signed a ‘remit’, as well as a ‘charter’ governing the decision-making of its new Monetary Policy Committee (MPC).

The remit says the MPC’s operational objectives are to “keep future annual inflation between 1% and 3% over the medium term” and “support maximum sustainable employment”. The remit replaces – and is largely the same as – the Policy Targets Agreement previously signed by the Minister and Governor.

As of April 1, the law will require the MPC, rather than the Governor alone, to make decisions on monetary policy, including the setting of the Official Cash Rate.

Robertson says the RBNZ’s independence will be maintained, with the MPC appointment process mirroring the way the Governor is appointed.

In both instances the Finance Minister makes the appointment on the recommendation of the RBNZ Board. Robertson says this means there's a "double veto" in the process.

Delivering on Phase 1 of the Reserve Bank Act review, the MPC will have between five and seven members (including the Governor and Deputy Governor), with the majority being Reserve Bank staff.

Robertson confirms the first MPC will have seven members – four from the RBNZ and three externals. Appointments are expected to be announced in mid-March.

A Treasury representative will also sit on the committee as an observer – the point of their presence being to improve the quality and flow of information between Treasury and the RBNZ.

The Charter says the MPC’s decision-making is “enhanced by embracing diverse opinions that reflect, for example, members’ unique personal and professional experiences and educational backgrounds”.

Robertson wants the members to add “diversity of voice” to the MPC.

Asked exactly what he means by this, he says it’s a matter of looking at the New Zealand economy “as a whole” and ensuring there are people who come to the table with different perspectives on that.

While Robertson recognises they’ll need economic expertise, he says: “Monetary policy – while a technical discipline in many ways – also has, as I’ve come to learn over the last few years, many interesting psychological and behavioural issues involved in it as well.”

Orr notes that in practice the Governor already consults with people from within and outside of the RBNZ on OCR forecasting and decision-making.

However, he says having a formal committee is about being “more accurate, deliberate and transparent” around who’s involved.

Robertson refutes claims the structural changes to the RBNZ are political tokenism, saying they’ll result in a “significant” lift in transparency.

“While I have absolute faith and trust in the Governor and indeed in previous governors, you never know what could happen in the future about someone having the sole mandate to make policy,” he says.

“I think you’ve got to make good law and that law should reflect best practice.”

Orr agrees it's good to “reduce the risk of the Governor going feral”.

MPC members can talk... within limits

The Charter says the MPC will “seek consensus in decision-making,” but when this isn’t possible, decisions will be determined by a majority vote.

“The announced decision of the MPC will include a summary record of the MPC meeting that includes an overview of the economic outlook, the risks and policy options discussed, any material differences of view or judgement, and an unattributed record of any vote taken.”

The Charter says MPC members can comment on monetary policy matters, but essentially need to keep the message consistent with the MPC's official communications.

They will also be constrained from speaking too off the cuff, with the Charter saying: “Members are to consult with the MPC within a reasonable timeframe in advance of any public communication, refrain from characterising the individual views of other MPC members, and ensure such communication is publicly advised in advance and on the record (on the Bank’s website) in real-time.”

The Charter also enables the MPC to withhold publishing information on market interventions it makes.

“If the MPC decides that the Bank should intervene in financial markets, it shall also consider whether prompt publication of details of the decision would impede the achievement of the intervention’s purpose,” it says.

“If so, the MPC may withhold such details until it deems that publishing them is no longer likely to create such impediment.”

Unless they are going to reel in the emergency OCR that we've been subject to for years then this is just smoke and mirrors.

We've created a committee. We've made sure only parrots can be on it. If they talk about anything but crackers, they're out. We're really surprised how we've made it this long without it to be honest.

Well, at least the catering will be cheap - bag'o'birdseed. And as long as the Guv remembers to have a flunky cover the floors with newsprint before each committee meeting, the cleaning bill should not be excessive.

Can we refer to the members as Pollies, though? Or is that Animist?

We had to go wider in scope - this is as far as he can push it without confusing the masses (who have been fed the neo-liberal cant about an unlimited planet).

Goes in parallel with the Treasury move to valuing 'wellbeing'.

is this a joke? I am sorry, but the MPC function reads a bit like a Board of Directors, but you can only get on it if the Governor likes you, and the Finance Minister agrees! Opportunities for croniism and nepotism abound! So how do we protect against corruption?

Sniper rifle, no idea why its taking so long for someone to use one in Venezuela.

Don't be ridiculous, just demolish the building on national live tv, it worked pretty well on 9/11...

Why the concern of a governor going feral only now? The RBNZ has been around a long time.

I think we should be worried, this reeks of possible government intervention if things don't go in the right direction for them. The current crop of politicians are like conductors in an orchestra, but they really shouldn't be playing the instruments.

This is a little worrying. Political interests potentially interfering with the independence of the RBNZ in policy decisions.

This is a little worrying. Political interests potentially interfering with the independence of the RBNZ in policy decisions.

Only a little worrying?

Finally, tilting the power away from the most undemocratic public servant in the country...should mean the end to deliberately inflicted recessions and that bothersome 3% unemployment rate which works so well at keeping employment rates from reaching the point where workers have an equal say in pay negitiations. We're coming for you Mr Moneybags....

Can you explain to the class how this unelected committee is more democratic?