Upper North Island port ownership under the spotlight according to Shane Jones, who floats the idea of one entity owning controlling stakes in the Ports of Auckland, Northport and the Port of Tauranga

Upper North Island port ownership under the spotlight according to Shane Jones, who floats the idea of one entity owning controlling stakes in the Ports of Auckland, Northport and the Port of Tauranga 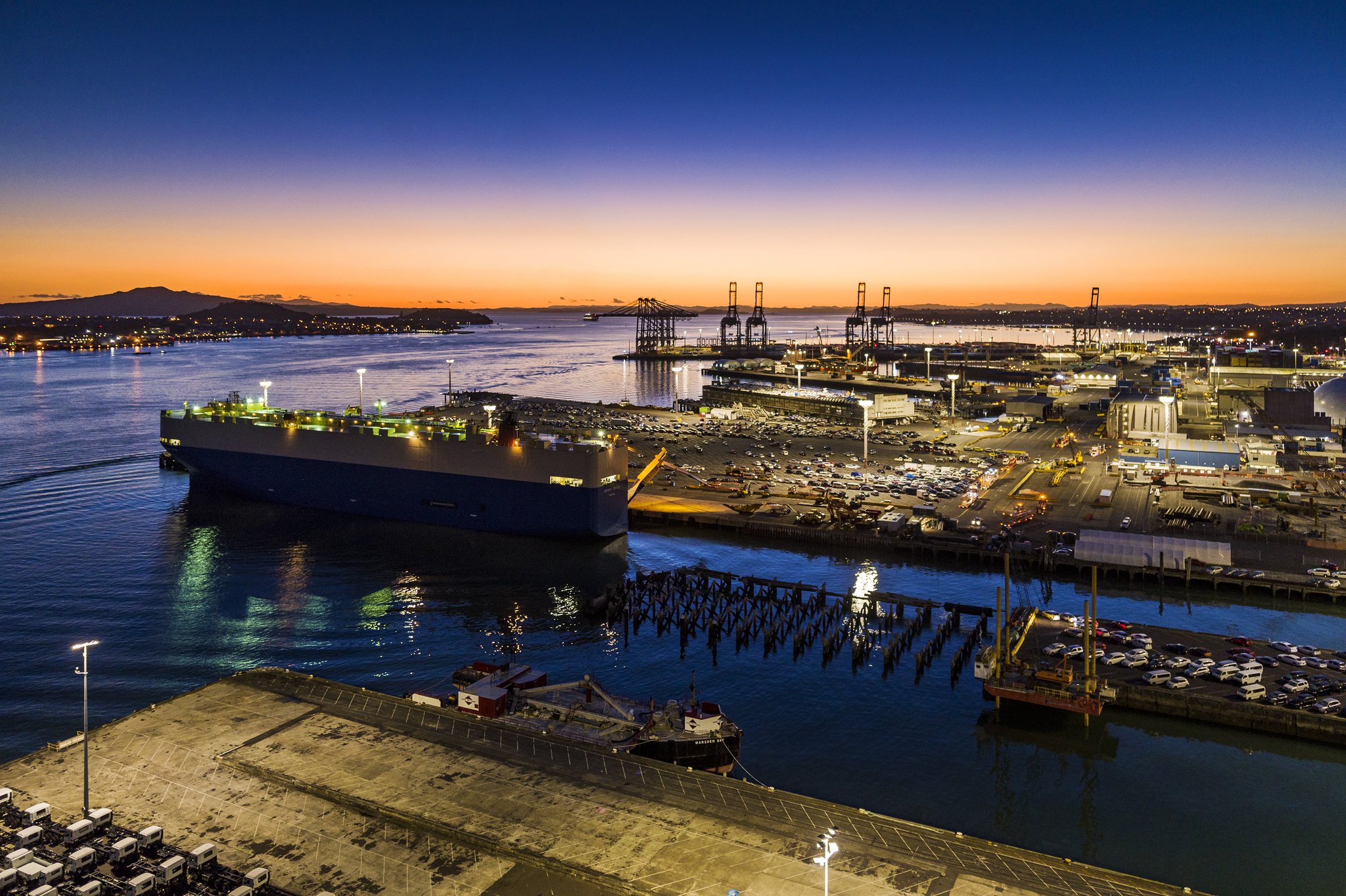 He says creating one entity to own controlling stakes in the Ports of Auckland, Northport in Whangarei and the Port of Tauranga has to be investigated and he wants to get a mandate to do it.

The Government established the Upper North Island Supply Chain Strategy working group last year to look at the development and delivery of a freight and logistics in the country’s Upper North Island. It has also been tasked with investigating the feasibility of relocating the Ports of Auckland to Northport in Whangarei.

The working group released an interim report on its work to date on April 27.

The New Zealand First MP says both the Ports of Auckland and the Port of Tauranga have shares in Northport and he says this leads to a lack of co-ordination between them.

“As the minister involved in this study I don’t have the mandate to coalesce the parties into forming one entity,” Jones says. “But as God is my witness as we move towards the next election that’s something we’re looking at campaigning on. To create a mega-holding [port] authority we will need a strong mandate from the electorate. But next year is election year and our party has been a long-time supporter of port rationalisation.”

The working group’s interim report says the ownership structure of the three upper North Island ports is complex and is characterised by significant local government and cross-port ownership.

The Ports of Auckland is wholly owned by Auckland Council. While Northport is a 50/50 joint venture company between Marsden Maritime Holdings and Port of Tauranga. Marsden Maritime Holdings is a publicly listed company and its two largest shareholders are the Northland Regional Council (56.3%) and the Ports of Auckland (19.9%). While the Port of Tauranga is owned by the Bay of Plenty Regional Council (54%) and by the public (46%).

“The interwoven nature of port ownership has restricted ports from developing in New Zealand’s best interests. Current decisions tend to be made in isolation which some believe has led to inefficiencies and duplication of resources.”

Jones says he’s not talking about nationalising the ports of Tauranga and Northport, but is instead keen to see if it is possible to consolidate the stakes held by the Bay of Plenty Regional Council, Auckland Council and the Northland Regional Council. He says looking at the three ports the majority of them are directly or indirectly owned by local government.

“So moving forward I’m keen to see what the major options are. Would New Zealand be better served by rationalising the ownership interests in those ports?”

He says while the Commerce Act would be a stumbling block it was previously circumvented to create Fonterra and he says it could be again. Both Marsden Maritime Holdings and the Port of Tauranga are listed on the NZX.

“All of these ownership options are things to look at in the future,” Jones says.

Jones has previously stated his support in seeing Whangarei’s Northport grow and he’s keen to see the transfer of economic activity from the Ports of Auckland further north.

He says forming one port owner in the Upper North Island could also allow for greater investment.

“The creation of such a powerful entity could be a shot in the arm for New Zealand equity markets as well.”

“It would fail all of the competition thresholds in the Commerce Act,” Cairns says. “And it would create a dominant monopoly in the Upper North Island.”

He says it also wouldn’t help foster competition in the industry.

But Cairns is quick to say he’s not opposed to the working group’s efforts.

“The Port of Tauranga welcomes the study which is putting some sunlight on the Upper North Island supply chain. We’re looking forward to meeting the working group before they release their next report in June.”

“That would be a response for our shareholders [to make] and I can’t really comment on that. Not at this point.”

The working group will deliver another update report on its progress in June, before a final report setting out its conclusions and recommendations for the next five years will be presented in September.

The group is being chaired by former Far North Mayor Wayne Brown and includes KiwiRail chairman Greg Miller, who Jones describes as an international expert in logistics, as well as Susan Krumdieck, Shane Vuletich, Sarah Sinclair and Noel Coom.

No one from the Ports of Auckland was available to comment for this story.

"Jones has previously stated his support in seeing Whangarei’s Northport grow and he’s keen to see the transfer of economic activity from the Ports of Auckland further north."

Maybe someone could ask Aucklanders about how they feel about sacrificing economic activity in our region for the benefit of Messrs Jones and Peters? Who do we send the bill to?

Since I don't live in Auckland,perhaps I shouldn't have a view,but overall,I would have thought that long-term,Auckland would gain significantly if all that prime land were available to the city for 'good quality' development;commercial,residential and leisure.

There are some really nice areas and it is blessed with a magnificent harbour,but overall,it's a pretty crappy little place with poor to dreadful leadership.

Coz when the state creates monopolies it always ends well...

And when the private sector creates one you're ok with that?

I find the blue skies planning of port Auckland hard to understand as the port is congested to the point where shippers are demanding a premium for containers landed at the port.
No cure for the current situation while the port talks of endless growth.
https://www.stuff.co.nz/business/95383973/traffic-congestion-costs-auckl...
https://www.harders.co.nz/news/port-auckland-congestion-charge/
Bizarre

I’m a practical man so I propose reinstallation of the wharf rail system and barrier arms to allow rakes of up to 16 wagons to be shunted across quay street.
Bad luck to the suburban services I say...council income is what matters....

Turns out my comments are unnecessary, the Council agrees...
http://www.portfuturestudy.co.nz/
Time for freight to leave...

so what bad news is he trying to deflect from today -- windbag full of hot air!

“He says while the Commerce Act would be a stumbling block it was previously circumvented to create Fonterra and he says it could be again.”
I don’t know if fonterra is the best example to point to at the moment.... But hey, if your ideology is centralisation of power then what else would we expect.

There is also the small matter of this altercation...

Shane Jones really is something else...

Its a no brainer. Don't put too much weight on POT's claim of competition being the bedrock of efficiency. They use grossly underpaid steveadores to keep costs down, the service is terrible and when your container does leave the port on truck it gets delayed by traffic congestion and by rail its worse because tye line is already at capacity. Strangely enough POT isn't stumping up for either of those two choke points to be relieved...

I saw an estimate for the new port on the Firth as being $5 Billion dollars, if approval could be obtained at all.
As Auckland is stretched paying for suburban services under the city and maybe light rail, I can’t imagine them owning a new port, Joint venture maybe.

Smaller is better. Amalgamation at the top does not ever produce. Thats a fantasy idea from those who have no ideas.

It looks as if two of the three ports mentioned here are at breaking point, and without significant infrastructure development immediately around & beside them (in Auckland & in Tauranga) we are at peak port. I say this from the outside looking in, as both city's ports seem to be jammed to the gunnels with significant traffic issues in all directions other than on the water. The above point about neither port involved in any meaningful discussions about the wider integrated traffic issues is appropriate & is highlighted by their respective silence on the matter.