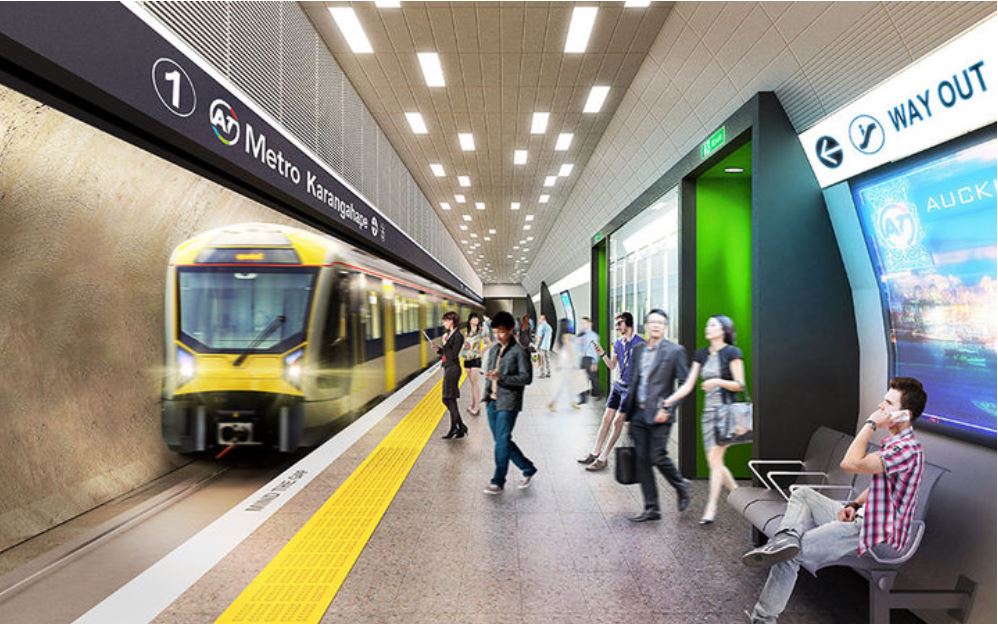 Auckland councillors have voted to pay for the City Rail Link (CRL) cost blow out after a marathon six and half hour debate on Thursday.

But it won’t be selling the city’s carparks to pay for it.

The project is being jointly funded by the Government and Auckland Council. It was originally expected to cost $3.4 billion, and was scheduled for completion in 2024. But last month City Rail Link Limited chief executive Sean Sweeney confirmed the new revised estimate for the project had ballooned out to $4.4 billion, and said it will have to ask the Government and the cash strapped Auckland Council to pay for the shortfall.

Goff outlined a plan from council officers which included $500 million in cost savings it could make to pay for the cost overrun. This included looking at the sale of some its non-strategic assets, including the Fanshawe Street, Victoria Street and Downtown car parks, as well as negotiating a long term lease arrangement for the Civic Car park.

The sale was expected to raise $100 million, with half going to the CRL project and the other half being used to fund more park-and-ride facilities.

But at Thursday’s full council meeting, a number of councillors stated their opposition to selling them, including councillor Cathy Casey.

“What is the reason for keeping it on the table? We don’t want to sell our parking buildings.”

According to the council officers, the four carparks brought in a gross total of $23.8 million in the 2017/2018 financial year. And Auckland Council chief executive Steven Town confirmed Tournament Parking and Precinct Property had already shown an interest in some of the assets.

The original recommendations said the council would work on a strategy to assess Auckland future off-street parking requirements. This included investigating options for the council’s city centre car park buildings, including “the status quo alongside outright sale, partnering with developers, and concession arrangements”.

But changes had to be made to the final recommendations to remove the option of outright sale. And any future decisions on the strategy and any specific actions in relation to any carpark buildings will now have to be made by the Governing Body.

And there’s money to be made in parking. SkyCity recently announced it has sold a long-term licence to operate its Auckland carparks until 2048 for $220 million to Macquarie Principal Finance.

Councillors asked Goff if he would be willing to go back to the Government and ask it for more money to cover the shortfall. He said he knew what the answer would be.

“I’ve raised it with government ministers and their response to me was forthright. Your council negotiated this deal with the last National government and we’re not going to revisit it.”

Despite his response, the final recommendations included asking the Council to formally approach the Government with a request that it increase its capital contribution to the project.

Other recommendations approved to help pay for the project’s cost blow-out include:

- Interest cost savings due to lower market interest rates;
- A reduction in cash holdings from improved cash management; and
- Re-assessment of the valuation of operating contract commitments;
The CRL project is a 3.45 km twin-tunnel underground rail link which will connect the Britomart Transport Centre with new stations at Aotea Square and Karangahape Road.

It will make Britomart a through station and will provide quicker travel times for many people and will also allow better access for train users to parts of the city centre with the new stations near mid-town and Karangahape Road. The CRL project will allow the rail network to at least double it existing capacity. City Rail Link Limited was formed in 2017.

they need to trim staff
staff numbers since it became one city have blown out along with the amount on 100k+
was not the one city supposed to drive down the costs due to scale, seems the smaller councils were better now

100K is not a big number in a city like Auckland. People are obsessed with this as a metric and I have no idea why.

$100K is a massive amount compared to the incomes of most of the people who are paying for these salaries via rares and other charges.

$100k is not much compared to house prices.

As the city grows, so does the complexity of its administration. In order to remain competitive, the Council needs to pay good salaries to attract and retain talent as its management and operational staff.

As for your salary comment, even above average performers in the accounting, law and economics profession make 100k+ in their 4th or 5th year post-qualification.

Apparently council have already hiked the cost of their building parking fees. They would probably say they had to, to incentivise commuters away from cars. I'm sure glad I am not commuting in to the city from the outer north shore by bus. What a waste of time

Why would they own parking buildings though? Surely we don’t need the council to be subsiding rich people who drive into the city for work? It just makes no sense at all.

We need densely built cities and towns not the crazy urban sprawl that is evident when you drive the southern motorway. Successful public transport cant cope with that kind of town planning and until then we will love our cars. One bedroom units with a young couple will have two cars and three bedroom houses up to six cars.

How about non-rich people that occasionally need to go into the city to do various things like visit various professionals for whatever reason, and for whom it is far more convenient to drive to the city, do what they need to, then drive onwards to work rather than pfaff around with useless and unfamiliar public transport routes and things?

This is like asking Auckland Council to buy a reliable quality torch for emergency, they came back with $2 torch from the warehouse and didn't get any batteries.

Or, in the grand tradition of Gubmint Procurement, came back with a gold-plated Maglite, purchased for the bargained-down price of $4,587. Batteries extra, 4 'D' cells for $50.88 each (GST Exc).

Good decision. The parks are strategic assets and public amenities.

Wouldn't mind to own a carpark building hmmm...

It's a staggering amount of money which will, if Google, GM and the Chinese Govt are to be believed, will become outdated within 10 years of its completion when AV cabs take over the public transport role.

AV cabs would come with their own issues. I cant believe that all the necessary development will happen within 10 years if ever but I would be happy to see it by then.

The computer will take over the role of the bus/train driver, not get rid of the bus/train. 40 or 400+ people per vehicle is still going to be a lot less congestion than 1-2 people per car, and there will be a lot more cars if the marginal cost of a trip drops significantly.

Economics do not come into the Economy these days. Sensible business decisions and inflated egos are at odds with each other are at odds with each other, repeat after me, who cares if the small fry cannot pay these billions. Inflationary impacts will hit in the future. We may end up like the UK. Read this item below and see ones future.
Comments are worth reading too... Borrow till the till stops taking the money is not endless. It has impact. 100K is not an insignificant amount today. Profit has to come into play, one day. Billions wisely spent are ok. But we will need trillions to keep the interest ...flowing. I think some call it inflation. I think some do not know how to earn, but the certainly know how to spend. Who cares what will happen when the penny drops...we will all be multi-billionaires. No need for work, no need for rail. Just stay at home....and think Big. You can always get a return from Houses.......Mate.
https://www.bbc.com/news/business-48145556

The car-hating staff say "Sell off those terrible parking buildings!"

The elected staff (especially the mayor) say "Well, yes, but we'll be out on our ear come the next election, so no."

Aforementioned staff go back to planning how they can get everyone to live in an apartment by a train station.