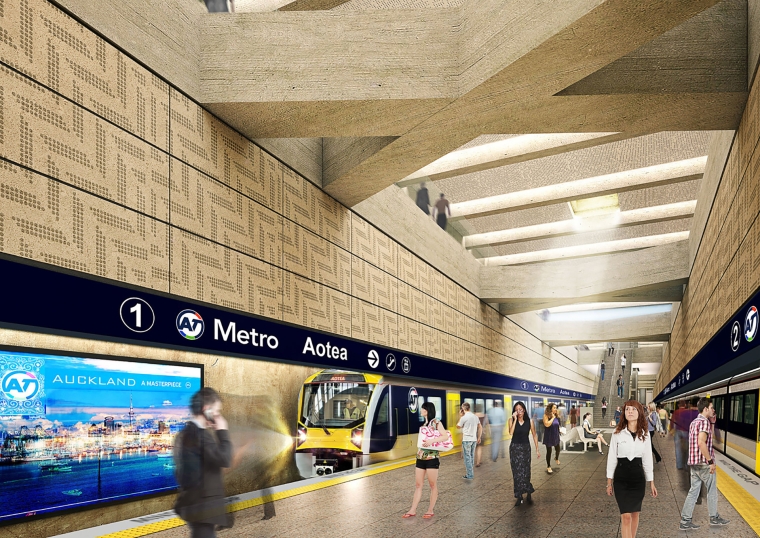 Auckland Mayor Phil Goff says Auckland Council can pay for its share of the City Rail Link project’s $1 billion cost blow out without increasing the city’s debt or rates.

The project is being jointly funded by the Government and Auckland Council, and was originally expected to cost $3.4 billion and scheduled for completion in 2024.

But at a press conference on Wednesday City Rail Link chief executive Sean Sweeney announced the new revised estimate for the project has ballooned out to $4.4 billion and it will have to ask the Government and Auckland Council to pay for the shortfall.

The CRL project is a 3.45 km twin-tunnel underground rail link connecting the Britomart Transport Centre with new stations at Aotea Square and Karangahape Road. It will make Britomart a through station and will provide quicker travel times for many people and will also allow better access for train users to parts of the city centre with the new stations near mid-town and Karangahape Road. (See analysis of the City Rail Link business case here).

Goff says council officers have presented him with a plan outlining $500 million in cost savings it can make. But the Auckland Council will still have to sign off the proposal at a meeting next month.

“They have come up with a plan that enables us to manage that extra cost without either putting any extra pressure on the ratepayers, or breaching our debt to revenue ratio,” he says.

Goff says the Council will look at the sale of some its non-strategic assets, including the Fanshawe Street, Victoria Street and Downtown carparks, as well as negotiating a long term lease arrangement for the Civic Carpark.

“We are also looking at the way in which we manage our cash, we currently have about $200 million in cash on hand. Our financial advisors, both internal and external, say that’s more than we need and we could reduce that by $100 million dollars.”

Goff says the council can also save about $120 million through renegotiating a number of its short terms loans. While it will also be looking at how it finances a number of its longer term contracts.

He says the Council is also keen to reach an agreement with government to allow it pay for the CRL project over a longer period of time.

Goff says the new savings proposal means the Council will have to manage its finances carefully.

“There won’t be money to splash around on some other projects that might have been desirable, but not essential.”

But he says the cost saving plan will free up enough money to enable it to meet the increased cost of the project.

A decision was made last year to increase the scope of the project to accommodate longer, nine-car trains at the stations. This was to allow for more of commuters to use the train network. But coupled with the increasing costs in the construction sector it has led to a $1 billion cost blow-out.

Goff says the original cost estimates were done five years ago with incomplete information and were based on unproven assumptions.

“What we looked at when we considered the cost increase was 'is there an option of not continuing with the City Rail Link' and the answer, very clearly, to everybody and I think to all the councillors, was that that’s not an option. We’ve invested $600 million in this project, but more than that this project is critical to the future of Auckland.”

Goff says under the original proposal the network would have been able to carry 36,000 passengers an hour, but within eight to 10 years the system would have reached its limit.

He says he’s confident the latest costings are more accurate than those that were signed off by former Mayor Len Brown and then Transport Minister Simon Bridges.

“Absolutely, they’ve been peer reviewed independently by two separate organisations and they both came back with an estimate that was within 2% of each other.”

And when asked about whether the Council was concerned about future cost blow outs in the project he’s quick to respond.

“I expect CRL to deliver on the timing and the cost of the project as it’s currently set up.”

Transport Minister Phil Twyford says the re-costing of the project has shown the previous government hadn’t set aside enough money to account for inflation and escalating costs.

“On top of that, competition created by a surge in large-scale infrastructure projects throughout Australasia has driven up construction costs,” Twyford says.

But he remains committed to the City Rail Link project.

“The Government will match Auckland Council’s contribution and we’re committed to seeing this project through.”

Auckland Council’s latest financial update shows its projected debt will be less than the $9 billion target it had set for this financial year.

But with just $1.2 billion of debt headroom to play with to remain within its debt-to-revenue ceiling of 265% and the project’s cost blow out topping $1 billion, the Council’s ability to absorb the costs by taking on more debt would be a squeeze.

And if it did a credit downgrade by S&P Global Ratings and/or Moody’s could be a real possibility. Something Goff is more than aware of as he seeks to avoid taking on more debt.

All these tweaks do nothing to make this project cost effective. Did they ever consider 9 or more car trains as an alternative to doing this whole incredibly uneconomical project? This project will go down in history as the least cost effective ever. Will the fares even cover operating costs? Let alone pay the interest on the loan. But even then, the council will have sold revenue gathering assets and cancelled projects all in aid of allowing a few west and South auclkanders get to the city.

Either longer trains or make them faster to load and unload. Make doors much wider. At main stations exit one side entry the other.

I think you forgot the east Aucklanders (after ameti), airport (after puhinui road busway), and central aucklanders.

That's rich. "A few west and South Aucklanders"? I've got bad news about who is actually absorbing most of the new residential construction in the city it's not Ponsonby, Grey Lynn or the other heritage areas. Heaven forbid West Auckland get any badly needed infrastructure at all, right? But as long as those new Aucklanders (read: foreigners) don't move into your neighborhood... that's the main thing.

$500 million in cost savings - just reduce staff levels to pre-amalgamation; that should solve it and then about a year later they can re-employ them.
My preference would be to sell PoA to ratepayers. Then decisions about the most economic use of that prime site would not be influenced by empire building local politicians and their bureaucrats.

True the population has increased. But they have taken to ncreasing use of contractors so that is not where the staffing costs have increased. My own area of knowledge is computing and logically (as hardware gets ever cheaper and more powerful) the staffing costs ought to have droppd by 80% but they haven't. The council does not build infrastructure - it employs consultants & contractors. Buildings are not being built as often as they were pre-2008 so not a large increase in consents. Parks in North Shore are getting smaller. They used to value properties in the past. Technology is supposed to save staff. Which leaves $500m spent handling complaints. As a oldie who complains in my experience their performance has got worse. There has never been serious analysis of staffing costs - labour (and that is how I vote) mayors are scared to tackle staffing.

Yeah...nah increasing the debt will ultimately be borne by rate payers so eventually rates it is.

Auckland rates are the lowest in the country as a percentage of property values, so this is the correct answer. Now if they'd just switch to a land only rating valuation at say 1% we could get some positive incentives going.

The problem with land based rates is that it’s kind of unfair for the council to tax people with a lot of land while at the same time disallowing them from using that land better (eg subdivide).

The potential utility is factored into the value, which means land taxes factor in all the issues like the one you mention.

That's why there are Uniform Annual General Charges - flat fees - plus the ability to levy targeted rates for drainage districts etc. Looking at Rates Required as a single figure to be divvied up over whatever the rating base is, is completely the wrong way to look at the issue of getting $x from y properties. TLA's are past masters at obfuscating simplistic comparisons, via differentials, UAGC's, special rates which may be based on e.g. number of toilet pans connected to sewers, and so on. My take on TLA Rating (I've worked on a few in-memory cubes which are needed to handle the what-if's in juggling rating impacts so as to get the most feathers with the least hissing) is recorded for posterity here...

Nothing you said changes the point i was making, looking at land/house values and using the same % rating fee as Ocelot is proposing is just daft.

Carparks are strategic assets for a city. Selling them is dumb. 1. Reduce staff because they are overstaffed. 2. Raise the rates. You want to live in the big city - you pay what itcosts to run.

Strategic in that they subsidise car use? Strange strategy for a city that has a problem with too many cars.

I want to live in the city because I was born here 30 years ago, and since then others have changed it beyond recognition while discounting rates for themselves and enriching themselves through strangling land and housing supplies.

But sure, keep sticking things on my tab. After all, our employers here are known for their generosity when it comes to wages, right?

We are currently vacating a building to clear the way for the train tunnel boring machine, in eden terrace. Been there 3 years, lease was roughly 1/2 market value. There are roughly 15 other tenancies that are in the same boat. It will be interesting to see what happens in these areas. Non retail business is definitely getting the squeeze in central Auckland.