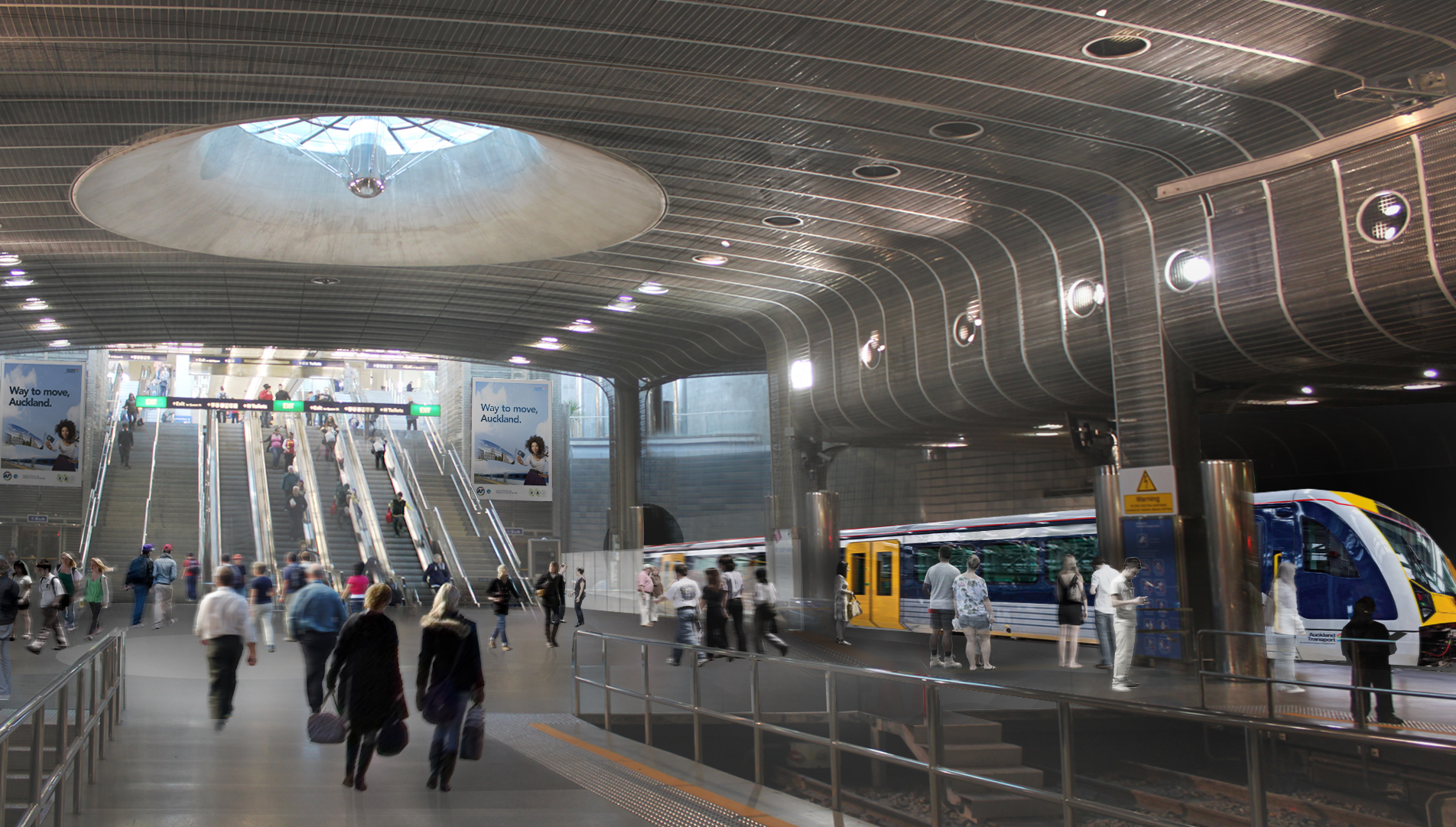 Mike Lee is one of three Auckland councillors who last week voted against the bail-out package for the City Rail Link project.

The former Auckland Regional Council (ARC) chairman says he has always supported the project, but couldn’t agree to signing off an extra $500 million in funding without more detailed information on the costs.

The project is being jointly funded by the Government and Auckland Council and was originally expected to cost $3.4 billion and scheduled for completion in 2024. But last month City Rail Link Limited (CRL Limited) chief executive Sean Sweeney confirmed the new revised estimate for the project had ballooned out to $4.4 billion and said it will have to ask the Government and Auckland Council to cover the shortfall.

On Thursday the Auckland Council voted to approve its $500 million share of the $1 billion cost increase after a marathon six and half hour session. But councillors Greg Sayers, Christine Fletcher and Mike Lee voted against it.

Lee says making such a major decision based on information gleaned from a report by PwC that was paid for by CRL Limited isn’t good enough.

CRL Limited hired PwC to update its economic assessment of the benefits of the project originally prepared as part of the 2015 business case. This was to reflect new parameters, a revised delivery schedule, and using up-to-date transport modelling. The analysis was included as part of the report to council prepared by council officers.

“PwC said it was worth paying because the cost-benefit ratio was still positive. But normally Treasury is the agency which should make those sorts of calls, not somebody for hire,” Lee says.

He says it was hardly independent advice.

“Let’s be realistic, consultants will tell you what you want to hear," Lee says. "PwC’s report was paid for by CRL Limited and the CRL Limited chairman [Brian Roche] worked for PwC.”

And he says the council’s report lacked any detailed information on why the CRL project’s costs had gone up. He says there was one table showing the original estimates, alongside the revised estimates, which included making the stations bigger to accommodate nine car trains.

“In late 2018, as a matter of good infrastructure project practice, CRLL’s Board and management initiated a reforecast of the total project cost. This reflected a view that market conditions had changed substantially since the 2014 forecasts, with increases in materials and labour costs as a result of significant competition for projects in the Australasian projects market, and a fall in the value of the New Zealand dollar.

“Cost forecasts, and peer reviews of those forecasts, are important because they can be used to inform a purchaser as to whether bids they have received are priced appropriately, both as a whole and in their individual components. CRLL asked its cost estimators to update the 2014 cost forecasts and had this work independently peer reviewed by another company. These cost forecasts have been benchmarked against similar projects internationally. CRLL and the sponsors also used the sponsors’ assurance managers (Advisian) to provide a third view on the revised cost forecasts.”

But Lee says the real detail was still lacking.

“It’s not our money to play with. We have to be prudent and careful and not just sign off a decision on the flimsiest evidence,” Lee says. “All this is doing is inflaming the market. We’re saying to companies you can overshoot your costs and inflate your price and then you can go back to the politicians and they will rubber stamp it. I’ve been a long term advocate of this project from when I was in charge of the ARC, we started the business case for it.

“But I thought it would be totally immoral to vote on a half a billion dollar bail-out without proper information,” he says. “There are limits and we have to be fiscally responsible. We can’t just rubber stamp any proposal put before us.”

"PwC was responsible for undertaking this earlier assessment for Auckland Transport, which is why it was asked by CRL Limited to provide the updated assessment. PwC had greater knowledge of the project, and the ability to complete the update more quickly than other organisations," Sweeney says. "The 2019 update provided by PwC was quite limited, mainly adjusting base benefit values to 2018 dollars (from 2014 dollars) and reflecting recent changes in patronage projections."

He says the role of Treasury wasn't to undertake the economic assessment, but to review the work provided by the agency (CRL Limited) seeking funding.

Councillor Greg Sayers also voted against the $500 million funding package and says the Government should be shouldering the burden of the CRL project's cost increase.

“The ratepayers shouldn’t have to pay a cent more and the Government should be stepping up to the plate,” Sayers says.

During the debate Mayor Phil Goff said he had asked the Government for more funding to cover the shortfall, but he’d been told it wasn’t interested in revisiting the deal. But Sayers he thinks the council should have driven a harder bargain and renegotiated its share of the project’s costs.

“I think we've lost a golden opportunity. I think it would be naïve to think that the money being spent on the CRL project isn’t going to affect local projects and core council services.”

The CRL project is a 3.45 km twin-tunnel underground rail link which will connect the Britomart Transport Centre with new stations at Aotea Square and Karangahape Road.

It will make Britomart a through station and will provide quicker travel times for many people and will also allow better access for train users to parts of the city centre with the new stations near mid-town and Karangahape Road. The CRL project will allow the rail network to at least double it existing capacity. CRL Limited was formed in 2017.

as someone that now uses public transport ( started using it last year) the service and equipment is much better, HOP card and app makes it easy to route plan, connect and see where the bus or train is
the buses and trains are much nicer, i see many people coupling it with electric bikes and scooters to make travel easier
the bus drivers down my street will drop me outside my house because the stupid council took away two stops when they put in bike lanes so i have an on stop but no off stop for a mile in each direction.
people are polite to the drivers saying thanks or morning so all round its a nicer experience
gone are the days of my youth when i could not wait to get a car so i had to use the buses and would go nowhere near the train
so now i use a mix of my car when needed and public transport
and as it improves more im sure more will start using it and myself when i come to upgrade my car will look at all options

Wow. Seems a lot, but of course I have nothing to compare it with.

Easier to do the rough maths with divide by the population of NZ (4.8m) or Auckland (1.7m). Then make a guess that the very old and very young don't have the money and won't be using it.

Before the 28%ish cost increase, the price per km was 1b and 1m per metre Davo. It looks like the flimsy data to justify the increased costs is gazumped by the even flimsier round number from the outset so nothing's changed.

Call it 20000 man-years of work @ $200k/person/year (including overheads). Thing is I bet that there are only a couple of hundred ever with hands on tools, and a lot of health and safety and cultural impact wallahs.

For $4.4billion you could buy every adult in Auckland a micro electric battery car, double the number of lanes on the roads, triple the parking spaces, and fix road congestion for a generation. In 3-5 years you could add self-driving to them for another $2k each to turn them all into autonomous taxis as well and fix road rush hour congestion forever.
https://www.alibaba.com/product-detail/Newest-micro-new-energy-electric-...

You're not factoring in the change in ownership model. People aren't that interested in owning an expensive and depreciating vehicle if they don't have to. All the industry analyses I've seen so far suggest far less congestion from autonomous cars, because of this and the fact that most congestion is caused by human stupidity.

And factor in the marginal cost of a trip dropping to near zero (in $ and the owner/users effort), so you send the car out to pick up or deliver everything on a whim.
Won an item on trademe, transfer the money and send the car to pick it up now (must have now.. tomorrow too late).
Kids want to go out, no need for Mum ir dad to drive them, the car will take them over to Johnny's and return. And then head back later to pick them up.
Fast food delivery - Uber eats on steriods.. no driver to pay, everybody will be offering free delivery. Hell, automate the pizza making and there will be pizza making vans circling your neighbourhood pulling up outside the customers house just as your pizza emerges from the oven.

Waterview tunnel cost less than half at 583m per km ($2.4b for 1.4km). What's changed that costs have increased so drastically in only a few years? Good on the 3 councillors who voted against.

Pffft. Small change. All AC's gotta do is sell one a them Viewshafts - E10 alone is worth a billion, according to none less than PwC......same guys as 'consulted' to CRL.....

Synergy, y'see. Swap an Overground for an Underground view.

Perhaps Len Brown is OK after all.

Len, please come back and we promise to buy you a stronger and more comfortable desk!