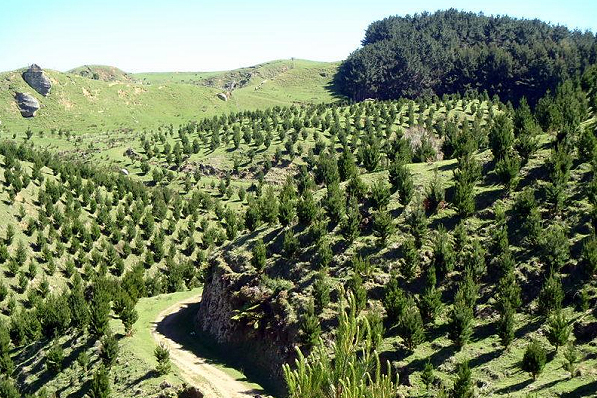 Forestry Minister Shane Jones says he’s keen to see Gisborne developed as a hub for processing wood for both international and domestic markets.

It follows his announcement on Thursday of a $58 million funding boost in this month’s Budget for Te Uru Rakau (Forestry New Zealand). The Crown entity was established last year and is leading the Government’s programme to plant one billion trees in New Zealand by 2028.

According to Te Uru Rakau (Forestry New Zealand) wood products are now the country's third largest export earner – behind dairy and meat. And forestry is a major employer in regions and contributes around $6.4 billion a year to the economy in export earnings.

Jones says the new funding will allow Te Uru Rakau to increase its regional presence to ensure the industry and landowners have the support they need. It will also see the agency focus on developing a sustainable, domestic forestry workforce.

“A key part to achieving our vision for the sector will be delivering in the regions and we will see a new premises built in Rotorua – the heart of the forestry sector – showcasing the use of wood in construction and accommodating Te Uru Rakau’s growth,” Jones says.

“Along with this, we will see Te Uru Rakau lead important work to capture and add value to the sector. They have been tasked with strengthening the domestic market for wood products and working closely with the sector to support investment in forestry.”

Jones says this will include increasing the amount of wood processed in Gisborne. He says some of the $58 million will be used to carry out analytical work and come up with an investment strategy for the proposal with New Zealand Trade and Enterprise (NZTE).

“But to incentivise the processing of wood there we need to enhance the transmission of electricity into the region, the port will need to be upgraded and so will the rail line from Gisborne to Wairoa. Because manufacturers are unwilling to move and invest millions in that region unless there’s infrastructure there.”

Jones admits it will take a lot of work to make Gisborne a viable hub for the industry, but says he plans to work with the affected stakeholders to see what funds can be accessed from the Provincial Growth Fund to help pay for it.

“I accept this is a medium to long term strategy,” he says.

Jones says he’s aware of the pressures the domestic wood processors are facing from overseas operators paying top dollar for New Zealand’s forestry products. But it is important that local jobs are created in wood processing, instead of just shipping the raw logs overseas.

Wood Processors and Manufacturers Association of NZ (WPMA) chief executive John Tanner says the amount of raw logs being shipped out of the country every day is a problem for the local industry.

"The issue we’ve had for a while is the very high prices for raw logs and they have been like that for four or five years now. That stimulates the demand for them and the domestic processors here then have to pay those high international prices.”

Tanner says the agreement the Government signed this week with China is a step in the right direction.

“In the industry we’ve been arguing for more logs to be processed locally and I think the agreement signals this government’s intent on doing just that,” he says.

Jones signed an agreement on Monday with Zhang Jianlong from China’s National Forestry and Grasslands Administration. He says the deal will pave the way for greater trade and co-operation between the New Zealand forestry sector and China.

“The updated arrangement supports and strengthens links between government, industry and research institutes in New Zealand and China. It provides a framework to address matters such as sustainability, wood processing and utilisation, and trade and investment,” Jones says.

A report released last year by the Forestry Owners Association titled: Facts and Figures 2017/18: New Zealand Plantation Forest Industry says New Zealand is now the second largest log exporter in the world to China after Russia. In the year ending December 2017 we exported $2.8 billion in forestry products to the country.

If foreigners are willing to pay more than us, that tells us they can turn a log into a more valuable product than us. That's the problem. Instead of wishing for cheaper logs (and cheaper imported labour) local producers need to invest capital to increase our productivity.

Very good point. You would think that the savings on shipping could give us a leg up as our overheads are higher but obviously not enough. What is it then? Are we lacking the entrepreneurial spirit? Are our labour and land values too high? Do we not have the skills and expertise?

We aren't even close to getting on the value added chain with forestry. Broadly speaking the objective of overseas buyers is to extract the raw material from the host country (us) then add all the value themselves once the logs are in their supply chain. We're no different to how Nauru was treated in the 50s and 60s when our farmers strip mined all the phosphate out of the island and ruined the place in the process. It doesn't help that our manufacturing base is virtually incapable of producing the sort of product the overseas markets actually want, engineered wood products require serious capital investment and the sort of longterm strategy and expertise we just do not possess. This is where our shortsighted corporations have really failed the country over the past 30 years or so. Time for the government to show these free market obsessed business leaders how to plan for the future instead of just the next conference call with shareholders....

The sort of capital investment Xlam put into Nelson? There aren't enough truck drivers, loggers and lolly pop men to get the trees out we currently have yet unemployment is up 10,000 in the past 12 months - let's blame "business".

Hard not to blame business. Basic free market supply and demand. Not enough workers?
- pay more
- invest in the worker's education and training
- make sure the worker doesn't leave the work site in a coffin (Definitely looking at forestry for that one)
If business did what it should, then the Government wouldn't keep needing to step in.

The Nauru comparison above is very accurate. Most of the NZX listed companies are owned by offshore interests, and are about extracting maximum cash out of NZ for minimal investment.

We are literally giving away our resources at a discount rate, and celebrating all the money that is flowing in. But what happens in 20/50/100 years time when they run out?

Not enough workers? - there are another 10,000 I think of. I guess the supply of welfare is out competing the demand for work at the moment. It's a global market - you meet the market or your customers get their wood elsewhere. Elsewhere being countries where jandals and cigarette are the only safety equipment.

Plenty of one the job training in forestry but I guess you didn't know that.

"It's a global market"

We should be focusing on adding value. The question is why business in NZ do not want to do this?

Might not be a great wood - who argued it was was - but it is the fasted growing softwood on the planet and is very versatile.

Exporting logs is currently the most profitable option.

Give Xlam a call in Nelson and find out why they couldn't make it work? Would you be keen setting up a business here if there is a shortage of truck drivers and lolly pop men?

"After months of deliberation and consultation, cross laminated timber company XLam yesterday confirmed fears it would close its New Zealand operations at Nelson. ...Chief executive officer Shane Robertson said the decision followed an extensive business review of current operations. “The existing highly manual, capacity-constrained operation in Nelson has been confirmed to be commercially unsustainable for future CLT manufacture,” he said.

Future supply to New Zealand would be met from the company’s relatively new operations at Wodonga, with a staged closure at the Nelson plant over the next few months."
https://fridayoffcuts.com/dsp_article.cfm?id=819&date=%7Bts%20%272019-05...

Well hey, this is globalism isn’t it? We can grow trees at a competitive rate but due to our laws and regulation we can’t process trees as cost effectively as other countries so overseas they go. China and others must look on at the western world self imposing higher costs with glee. To future proof ourselves do we look at lowering our overheads so we can actually be competitive? If not then what do we do? You can’t get wealthier through legislation (i.e. raise minimum wage), we preferably need to make goods to sell not just the raw materials.

Well, if you think that a free market will solve all problems, I suggest you read the link below (and don't just skim read due to the date of publication), to get a glimpse of how the leading European country handles its forestry resource. And, by the way, that country is the leader in CLT technology and exports...

Perhaps some of the difficulties are lack of a common regulatory framework and dare I say it, corruption.
In that sense CTPP may help.
I guess the framework greases the trade in europe and our manufacturers may prosper in a similar system.
But let’s not get optimistic, consider our efforts dairying in Chlle.

If NZ Inc knew what it was doing, it'd be a fine thing.

Perhaps we should stick to doing things that give us a welcome and a premium, honey,avos and kiwifruit, sav’s and chards to feed the poor and hungry.
Anyone can produce dairy products, and they like their own best.