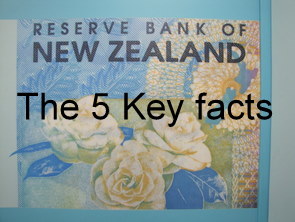 Here's 5 key facts from the RBNZ's MPS and rate hike

Every three months the Reserve Bank of New Zealand publishes its Monetary Policy Statement (MPS) and every six weeks it makes a decision on the Official Cash Rate (OCR). The MPS is always an invaluable insight into the New Zealand economy, its banking system and the Reserve Bank's thinking.

This June quarter MPS is no exception, particularly because it came with the first increase in the OCR since July 2007 and the first OCR change since March 2009. The RBNZ increased the OCR by 25 basis points to 2.75%.

Here are the 5 key facts from the MPS (in my view):

1. The inflation spike - The Reserve Bank is forecasting annual Consumer Price Index (CPI) inflation will spike to 5.4% in the June quarter of 2011 because of an increase in the GST rate to 15% from 12.5% in October this year, the imposition of extra petrol and power costs because of the Emissions Trading Scheme from July 1, an increase in ACC levies, and higher tobacco taxes.

The Reserve Bank said it sees these changes as 'one-off' changes that it can 'look through' under its Policy Targets Agreement that forces the Reserve Bank to keep underlying inflation between 1-3% in the medium term. It sees CPI inflation rising to 2.6% once the 'one-offs' from government policy are excluded.

2. Not too many Euro worries - One thing that RBNZ-watchers were concerned about before this MPS was the extent of the European Financial Crisis fallout on the New Zealand economy and whether it would be enough to stop the RBNZ from putting up the OCR.

Governor Alan Bollard made clear in the news conference and in a subsequent appearance before Parliament's Finance and Expenditure Select Committee that a further slowdown in the Eurozone economies (particularly in Southern Europe) would not be as damaging to the New Zealand economy as some might think.

He pointed out that only 10% of New Zealand's trade was with the Eurozone and a slowdown there would not be enough to derail any recovery in Asia and Australia, which are now much more important to us.

The only major issue would be if the financial market turmoil significantly affected global funding markets for New Zealand's banks, although they were in a much better position than before the Lehman Brothers freeze in late 2008 because they had at least partially weaned themselves off the volatile 'hot' money markets.

3. Higher funding costs - The Reserve Bank pointed out one of the reasons it could afford to increase the OCR at a slower rate and to a lower level than in previous recoveries was the increase in funding costs for banks since the Global Financial Crisis. It estimated these extra funding costs at between 100-150 basis points. This was being passed on in the form of higher mortgage interest rates and higher term deposit rates. The RBNZ pointed out this meant it did not need to raise the OCR as far or as fast this time around.

The RBNZ forecast the 90 day bank bill rate, which is closely connected to the OCR, will increase to a peak of 6.1 in the December quarter of 2012 from 2.9% now. Assuming the gap between the OCR and the 90 day bill rate stays the same, that would imply the OCR increases steadily to around 5.75% over the next two years. Given floating mortgage rates are around 5.8%, that implies they are likely to increase to around 8.8% by the end of 2012.

There is the risk though that those bank funding costs increase further because the Reserve Bank is putting up the Core Funding Ratio from 65% to 75%, forcing the banks to raise more expensive funding from local and long term sources. Although it was notable the Governor reiterated that the CFR was flexible in that the RBNZ could slow its implementation if it was causing problems for the economy.

4. More potent OCR - The Reserve Bank noted that the proportion of mortgage debt that was now on floating mortgage rates was now up over 30%. This compares with 12-13% at the end of the housing boom in 2007/08. Now that floating rates are cheaper than fixed rates, KPMG estimates that over 70% of new mortgages being written are floating rather than fixed. This means that when the RBNZ increases the OCR it will have more 'bite' on the economy than in the past.

Starting in January 2004, the RBNZ started increasing the OCR from 5% and was forced to slam it up to 8.25% by July 2007, in part because its OCR moves were largely ignored by borrowers who were able to borrow at fixed rates that were significantly cheaper than fixed rates. Governor Bollard mentioned in the FEC appearance that the average maturity of mortgages was now down to 10 months from much higher at the end of the recession.

This means he will be able to limit the increase to something around 5.75% over the next couple of years, even though mortgage rates are likely to still rise to around 9-10%.

5. Spending less and saving more - The Reserve Bank projected an improvement in the household saving rate to almost minus 5% by 2014 from minus 13% in 2007, while household spending as a percentage of trend output would fall to 65% from 69% in 2005. All this will make like tough for retailers, but should help rebalance the economy.

6. A bonus factoid - Alan Bollard told me before the Finance and Expenditure Committee that he still had a heavy truck drivers license. It's hard to know whether he was just pulling my leg, but he did reuse his analogy in the FEC from his May 6 softening up speech about how he was like a truck driver taking his foot off the accelerator, rather than pushing hard on the brake. This is a gratuitous segue to re-use our excellent Chris Slane cartoon, which he said he liked. He remarked that the tattoo with the fluffy interest rate and exchange rate dice was an accurate representation...