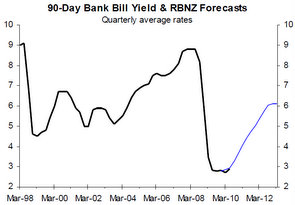 The RBNZ and the 10 forecasters surveyed by NZIER in June are predicting robust economic growth over the next two years and robust growth in residential building activity (and, by implication, robust housing market activity more generally).

Short of a miracle housing demand will remain low for the next 12-18 months based on prospects for the primary drivers of the housing market (i.e. the optimistic predictions for residential building activity are likely to be wrong by a long shot).

By contrasts, based on the rigorous analysis of economic growth prospects contained in our monthly Interesting Times reports, there are good reasons why the economic recovery continues to broaden and strengthen this year.

However, the prospect of weakness in housing market activity in 2011 means economic growth is likely to run at least moderately weaker than the forecasters are predicting in the chart on the previous page. The logic of the economic forecasters appears to run something like the following: an economic recovery is underway and will be followed by a couple of years of robust economic growth and, fitting with this prediction, residential building activity will grow robustly while the strong growth will result in significant interest rate increases.

The only problem with this view is that the economy does not work like this. The chart above shows a consistent inverse relationship between the monthly number of house sales reported by REINZ and the average mortgage interest rate.

On the bright side, the average mortgage interest rate has not changed over the last few months, which implies that the number of house sales should remain reasonably stable over the next few months before grey clouds start rolling in on the back of OCR hikes. Unfortunately, our analysis of prospects for net migration, the second of three key drivers of housing activity, also points to a less than favourable future for housing.

The major housing affordability problems is also casting a dark shadow over the housing market, with this being the primary reason why housing activity is currently significantly below normal or average levels

See here for information on the Auckland workshops, while we are planning workshops for Christchurch in late September.

I get no perverse gratification from warning people about negative risks, like the one currently facing the housing market.

My aim in setting up Strategic Risk Analysis in 2006 was to provide valuable insights to firms and individuals exposed to the housing market and the economy so they can make more informed and more profitable operational, strategic and/or investment decisions. The workshop programme we recently launched is an extension of this objective. The inexpensive workshops deliver insights that any firms exposed to the housing market, the economy or the NZD/USD shouldn’t be without.

* Rodney Dickens is the former chief economist for ASB and now runs Strategic Risk Analysis, an independent research operation based in Taupo. He will run two workshops in Auckland on the housing market. More details are available here.