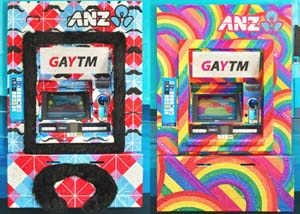 Why do you bank with your bank?

Were you lured by the social values it markets, or did you make your decision after considering its interest rates and policies before doing some number crunching?

Are you ditching the bank that leaves you with the most money in your pocket, and opening an account at ANZ because it’s supporting the gay, lesbian, bisexual and transgender (GLBT) community by decorating its ATMs with glitter and diamantes?

This begs the question, are banks taking their advertising campaigns too far, providing social commentary on the likes of sexuality, gender equality and cultural diversity?

After all, home loans and term deposits have little to do with who you get into bed with.

Yes, banks are out there to make a profit, and it would be naive to think consumers aren’t swayed by branding.

If banks are seen to understand our personal lives, we’re more likely to trust them with our personal finances, right?

Like choosing Fairtrade coffee over regular coffee for example, consumers are increasingly keen to support businesses with a “social conscious”.

And like choosing to “open happiness” by opening a Coca Cola, consumers have always been swayed by the lifestyle advertisers connect to a product.

Why should we expect banks to be different, and base their advertising on their services alone?

As a consumer I would rather my bank instill confidence in me that it’s taking care of my money, than get distracted trying to win over the masses by taking a higher moral ground on a social issue.

If I want to express my support for the GLBT community, I’ll attend the Pride Festival, not open an account with ANZ.

Separating this community out, only exaggerates its difference, and portrays it as different to the norm.

I can’t speak for a GLBT person, but using a pink ATM for example, isn’t going to make me feel more comfortable or accepted as a woman. If anything, it would make me feel inferior as I'd be distinguished from the status quo.

ANZ’s GAYTMs welcoming customers with the line, “Welcome Petal”, manipulates a gay stereotype to a point I believe is a bit over the top.

You could argue it’s all just a bit of fun and people need to stop being so politically correct, but ANZ’s set a new precedent that’s worth discussing.

I maintain a better way for banks to express their GLBT friendless, is by depicting gay couples, alongside heterosexual couples in their mortgage ads for example.

Portraying something as normal, or mainstreaming it, shows real acceptance.

A 2012 Westpac ad did this. The Advertising Standards Authority dismissed a complaint suggesting it promoted what was then interpreted as ‘illegal’ gay marriage.

Advertising campaigns aren’t the only ways banks are promoting their social conscious.

ANZ, Westpac and ASB have been awarded a Rainbow Tick, by completing an external audit and quality improvement programme designed to help organisations be welcoming and inclusive of people of diverse gender identity and sexual orientation.

Sadly some people are still getting used to seeing women or immigrants in business leadership.

Some work undoubtedly needs to be done to even the playing field for minority groups, and ANZ has done Matariki and Diwali themed ATMs.

But GAYTMs… come on ANZ! As New Zealanders, I thought we’d moved beyond this.

Personally, I find these ATMs more "fun" than the standard ANZ copy communications (yes, logos and colors are referred to as copy). But I think you raise some good points about superficiality in the relationship between a brand and a particular segment of the customer base. But why not other segments of society such as customers who identify with race such as Polynesian and Chinese? Do the banks have language options for these customers (I have been based in Japan and Vietnam over the last 10 years so I am unsure) if they wish to execute in a language besides English? Isn't this a much more important function to bank consumers? Does the gay community choose their banks; remain loyal to; and recommend banks based on the design aesthetic of an ATM? Or is it possible that they feel that the banks is trying too hard to assume gay culture?
In terms of how ANZ sees its relationship with current and potential bank customers, I think that this a little confused. What happens when ANZ tries to be everything to everyone?

This promotion panders to a stereotype.  As with all sectors of society, the gay community is diverse and is not all camp and rainbow.

What about the Bears?

It "panders"  in that it's a tacky immature stereotype... It reminds me of how TV shows turned done homosexual actors for jobs in which the character was homosexual beased on the actor "not being "gay-enough".   The tasteless eyesore is more glitz DragQueen parody than actually representive of the gay community (which strangely enough looks pretty much like the rest of you (except more tidy on average... ;) ).

As for banks, the comment for Jenee sums it up perfectly:
"As a consumer I would rather my bank instill confidence in me that it’s taking care of my money, than get distracted trying to win over the masses by taking a higher moral ground on a social issue."

A "higher social ground" would actually be recognising LGBTQAO people as just people for "married" or any other gender/sexuality connected accounts or loans or loan relationships.... not this horrible attempt at cheap marketting tactics.   I have to ask whether they did some real consultancy work on the theme...and whether someone is having them on.

Why stop at GAYTMs ... suggest going all the way and renaming the bank gAyNZ to see how that goes ...

Seriously, some good points raised in the article. I also like the brightly colored ATMs, and would feel really good using them if it was part of an overall campaign to include as many different types of people as possible: different ethnicities, ages, sexual preferences, suits, overalls, headgear, hairstyles, etc. ANZ has missed an opportunity to be inclusive of everyone.

Hope the scumbags who did this http://www.nzherald.co.nz/nz/news/article.cfm?c_id=1&objectid=11405037 get caught, and an imaginative judge comes up with a creative sentence to educate these offenders.

But that is the whole point of branding. Surely universal values can transcend race, culture, sexuality, etc. Honestly speaking, I want my bank to be trustworthy, reliable, and easy to use. It doesn't really matter to me if the bank tries to communicate on some kind of deeper level. But that is only me and the bank is thinking that perhaps GAYTM works to change attitudes about the gay community in general. For that, I would applaud them.

what they're doing isn't branding.

Is this not called the Pink Dollar strategy in the U.S. ?
Its quite clever marketing really , it seems from google that about 10% of the Popn. are either open or closet -types .
Certainly seems Auckland has a larger population than elsewhere in NZ where tolerance is lower .
I would guess in Ponsonby the figure is around double ( or more )  the normal 10%
These folk will relate to ANZ  more readily as "friendly ', when most banks  are seen as hostile
For the rest of us it does not really matter anyway , so for example ,  I wont leave ANZ bank because of it , as it does not affect me .
So it may work well in the long run for ANZ

No. This is a marketing tactic, not a strategy. The strategy need not be about capturing the "pink dollar", but about promoting the brand as a bank that works with and engages the whole  community. The strategic objecitve is not explicitly expressed. To be honest, I don't know why gay or straight people would feel marginalized when dealing with banks. However, there may be deep-seated concerns (barriers) among the gay community about how banks evalutate mortgage borrowers considering that the banks consider dual-income households have become the norm for buying houses. If gay people think that banks are more reluctant to lend based on how they perceive household composition, then this is obviously something that the banks need to address. Perhaps the opportunity is much greater than we know, particularly if ANZ has done the necessary exploratory research.

Quite often the banks will lend to couples (ie married hetrosexuals) where they won't recognise others in a commited relationship (eg for home or investment property security.... eg "What do you mean this is your joint income you're both guys")

Also much of their advertising aims at (sorry for the rude term) "breeders".   I use the rude term because that's how it feels, when you're seeing bunchs of pseudo-families with gap toothed kids and saccharin flavoured parents, who are almost always in cliched roles used as pitch-men for the various banks "products".

Perhaps that's where the ANZ might go next?
They're stolen the stage with their Elton John glasses.
Now perhaps they'll follow up with campaigns that recongise
LBGTQAO people and couples can be FHB.  Can be going for the big holiday together, can make long term investment and retirement decisions together as a couple, do have to worry about each others work and home status, CAN have and raise children together and so will want equal access to childrens accounts and estate planning.   Just like "real" people.

Can't be any worse than Kiwibank's latest telling us that debt = independence.

Someone should make a complaint to the ad standards authority - totally misleading.

Are straight people allowed to use the GAYTMs?

Is the male actor in the latest ANZ Home Loans ad where his "wife" is receiving the news they have had their loan approved not the very same actor who played a gay partner in an earlier ANZ ad where they both portrayed being parents of a baby ?? Very confusing.