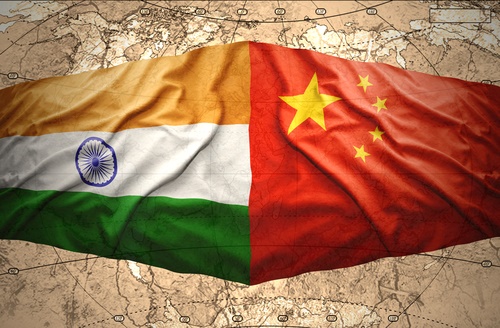 The term ‘Chindia’, short for China and India, has been around for a while.

China and India are the world’s two most populous countries and are likely to play a key role in the growth of the world’s economy over the next decade or so.

More recently, however, the mention of India in conjunction with China has focused on how India is growing faster than China, and may even displace China on the world stage.

Geographically, these two countries are neighbours. Yet we have not witnessed a great deal of interaction between the two giants until recently.

China’s steady growth rate has been around for two decades, while India’s has been on the rise only since the mid-2000s, though growing quickly. India’s gross domestic product (GDP) has amazingly doubled to US$2.6 billion in the 10 years since 2006.

With Prime Minister Modi, India embarked on a ‘Made in India’ campaign in September 2014. The plan is to increase the share of its manufacturing to 25% of GDP by 2022.

China in the meantime has its own ‘Made in China 2025’ plan that seeks to up-skill its manufacturing sector to be a major innovation centre by 2025.

Looking at the rivalry of markets is only natural for any business that has the capacity to enter either of the markets.

There is an assumption that if one of them grows, it grows at the expense of the other. This is simply not always true.

Despite its growth, India’s GDP is still about a quarter of that of China’s. It will take some time for India to catch up. India also lags behind significantly in terms of foreign direct investment into the country. The ease of doing business index places it much further down the list than China.

India and China face issues that come with growth, for example in the food safety space. We know about the various challenges that WalMart and McDonald’s have faced with meat produced in China. Maggi has not had an easy time in India either in dealing with local food authorities.

While companies like Foxconn Technology Group – the manufacturer of iPhones – have been carving a huge presence in various parts of China, they are only cautiously investing in India, with the hope that its infrastructure will improve.

India is a net importer from China and not closely linked to Chinese supply chains. It should stand to gain from China’s cheap imports more than it loses through a slow-down of Chinese-manufactured exports.

A major challenge for India will be to upskill a significant number of people in the decade ahead so that foreign multinationals can engage in more research and development to bring in more value-added jobs.

While this can take a bit of time, China’s movement towards high-end manufacturing will mean that India has huge potential to fill this gap, especially with its relatively cheap labour. After all, India’s manufacturing sector accounts for only 15% of the country’s GDP, as compared with China’s 44%.

A recent report from the World Economic Forum on inclusive growth and development suggests that India might be a lot closer to Indonesia than China when it comes to development.

Now, that’s a comparison that makes sense (to me at least) in terms of stages of development. India’s rise is unlikely to come at the expense of China’s prosperity.

Another significant difference that i believe works in India's favour is that it is a democracy. Although it remains severely riven by class distinctions, the fact that is a democracy means people are more willing and able to fully explore their individual talents and abilities and because of the population base and potential labour pool, the opportunities for the sheer mass of creativity to take root are phenominal. On the other hand China's government restricts information flow and sharing with the rest of the world (as just one example) because this may be a threat to it's political power resulting in a stifling of growth and development opportunities. Interestingly though this will not succeed in totally stifling peoples creativity and there are reports of Chinese circumventing their Governments restrictions. thus some of their growth is despite their Government, not because of it.