A tongue in cheek look at the broken record of housing supply not meeting demand in Auckland; What the RBNZ says in its Financial Stability Report and what it's really thinking

A tongue in cheek look at the broken record of housing supply not meeting demand in Auckland; What the RBNZ says in its Financial Stability Report and what it's really thinking 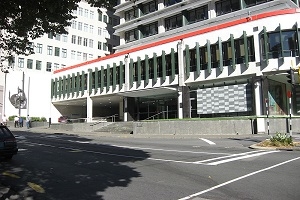 A Reserve Bank staffer throws hands in the air, gets up from computer, walks to the water cooler, kicks it, then goes for a cigarette out the back of the building.

“What’s happened to economic fundamentals?” the staffer bellows across to a bemused porter from the Bolton Hotel.

Launches into a rant that makes passers-by scurry along to the Terrace a step faster.

“How about those Warriors?” porter offers up after his third lecture on general equilibrium theory that week starts to get a bit tedious.

“Not surprised one bit. They’re an Auckland team, aren’t they! They can’t get anything right up there!”

Becalmed slightly, the staffer returns to their desk and puts the finishing touches on their portion of the May Financial Stability Report.

“This is, in part, driven by high levels of migration. Over 60,000 more people of working age moved to New Zealand than left in the year to April.”

Also true. Keeping to the script.

“Supply has been slow to respond to population growth, particularly in Auckland where about half of new migrants have settled. Building activity has picked up over the past two years, but the level of consent issuance in Auckland is still likely to be insufficient to accommodate population growth and address existing housing shortages.”

Try not to let the annoyance show through too much.

“The level of building activity may reflect a number of factors, including higher construction costs, capacity pressures in the construction industry and uncertainty around aspects of Auckland’s Unitary Plan, which is only partly implemented.”

They still haven’t sorted it out up there.

“It may also reflect the tightening of credit availability for residential property developers. Major banks have become more selective in lending to developers and have tightened lending standards in response to slowing deposit growth and a perceived increase in risks in the sector.”

Bit rough if I put all the blame on the Auckland Council.

“In the long term, an increase in housing supply is needed to address the underlying imbalance between demand and supply in many regions.”

We’ve been saying this for how many years now?

“It is uncertain whether the current constraints on building activity will persist. It is possible that building activity in regions with the greatest demand and supply imbalances could pick up in the near term.”

Got to pay some respect to economic fundamentals.

“The final form of the Auckland Unitary Plan is becoming clearer and several key appeals have been resolved in recent months. Also, construction sector resource constraints could ease as residential rebuild activity declines in Christchurch.”

Always conclude with a diplomatic tone.

They may not fix supply, but they may fix demand.

Very droll but why do we keep repeating the Government mantra that only 60k or 70k new people turned up. Didn't we also get a couple of hundred k on temp visas?

We don't generally hold our politicians to a standard of honesty these days. We seem to just let them say whatever, regardless of whether it's true.

In planning theory terms, I'd say AKL's housing (and congestion) crisis has become a "wicked problem" as per this definition:

We once owned a lifestyle block that had lots of gorse which we'd spent countless hours chipping away at. The previous owner stopped by one day and I asked, "what is the solution to getting rid of this gorse once and for all?" And he responded, "sell the place". So we did! Best decision ever.

There is an analogy in that for Aucklanders.

pressures are building across the Tasman, and as our banks are effectively controlled by there ozzy parents we are being dragged along for the ride

This is sobering on Stuff yesterday

"Canterbury's housing market is still in a post-earthquake boom, with consents outstripping the rest of the country.

Over the last year, Canterbury had the highest level of new homes consented per capita in the country.

According to Statistics New Zealand, 11 new homes were consented for every 1000 Canterbury residents in the year to June

The next highest number of consents per capita were Bay of Plenty and Waikato, tied at eight consents per 1000 residents.

Auckland was tied with Northland for the lowest number per capita, with six homes consented per thousand residents.

The national average was also six – double what it was in 2011.@

Interest.co.nz should show the up to date statistics on "consents per thousand" for each region/city

Be good also to know how many of these consents result in built dwellings.

Yep the quality of NZ's Statistics is also pretty 3rd rate too.....

Another major issue other than consents is construction costs. Building materials and labor are severly overpriced in my opinion (I'm in the process of pricing a house to build) as the comparative cost to build vs. buying a house is so much higher. I'm now considering sitting on my hand for another 1-2 years to let this market sort itself out. Or buying a house and sitting on my section until the boom is over.

Everyone has been fooled by national. Surprisingly hoe can no one is able to see through their farce.

How hard it is to understand that controlling demand is also adding to supply.

National is ideologically opposed to attacking property investment on the demand side, while
The supply side solution has been very slow to gear up and falls further behind.