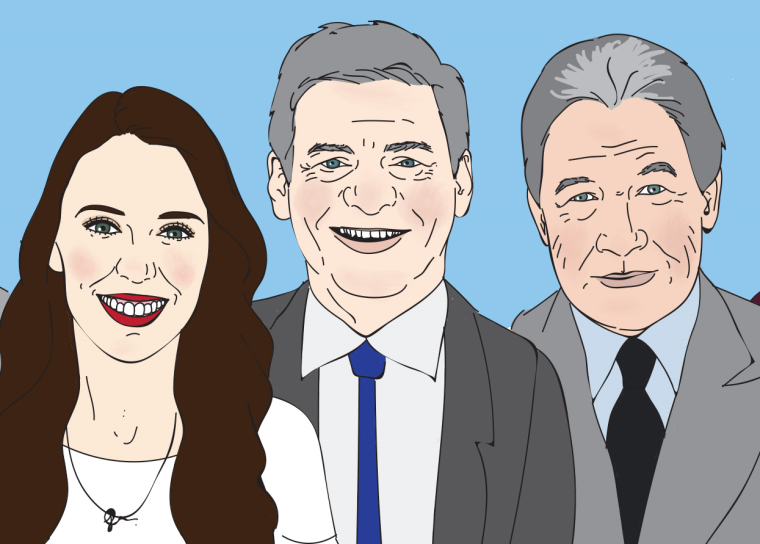 For all this talk of which major party might have the moral high ground to form a government with New Zealand First, we should also keep in mind the jostling over the fiscal high ground as National and Labour vie to bring Winston Peters onside.

Labour’s self-imposed Budget Responsibility Rules were devised to calm recession-era fears over spending and debt tracks under a Labour-Greens government. So, when New Zealand First came out of election night holding the balance of power, speculation kicked into gear around whether its pound of flesh from any coalition negotiations would cause the rules to go by the wayside.

Labour leader Jacinda Ardern wasted no time, however, in reiterating that coalition negotiations would be done against the backdrop of the rules. The thinking there is that Labour’s leaders would risk losing an air of fiscal credibility if they were to suddenly turn away from the rules – even though they were only agreed on with the Greens, and not New Zealand First.

As Labour only has about $3 billion of spare cash over the next three years above and beyond what it has earmarked for its own policy platform, it looks like there will have to be some policy trading in any negotiations with NZ First and the Greens. And particularly given Peters’ (and Ardern’s) insistence on no higher income or corporate tax rates or new taxes like a Capital Gains Tax (in a first term at least).

A number of Peters’ bugbear policies – like immigration and skills/training – aren’t going to set the Treasury books on fire, so Labour’s finance team – they’re already sitting there with the spreadsheets open, I’m told – is likely to be okay with these.

It’ll get interesting, though, if Peters starts talking about policies like tertiary education debt write-offs, cutting GST off basic food, lowering the company tax rate for exporters, increasing defence spending and bringing forward regional train building plans. Will there be enough fiscal space for a few games of switcheroo, or will the demands push spending and debt above Labour’s limits?

One scenario is that common ground will be found – for example by switching Labour’s tertiary education package for NZ First’s. But another is that, if Labour stubbornly sticks to its spending and debt track rules - meaning it can’t offer as much as National does - Peters walks away from those talks and into Bill English’s open arms.

I’m wondering whether this could in fact reveal a silver lining for Labour? This scenario would allow it to argue the ‘fiscal high ground’ in that it was prepared to go so far incorporating NZ First’s policy platform, but that it wasn’t prepared for Peters to run up expenditure and government debt beyond ‘prudent’ levels.

It will also allow Labour to imply that National must have offered more to Peters on big-spending policies than Labour was prepared to. The hope for Ardern and Grant Robertson would be that National suddenly finds itself being attacked on throwing fiscal responsibility out the window with a set of coalition bribes. And this after the entire campaign was fought by National on sound management of the government’s books and plans to repay government debt to 10% of GDP, from about 23% now.

This could be a huge boost for a resurgent Labour Party even if it does go back into opposition. “We wanted to form a responsible government, but couldn’t get NZ First to agree to responsible spending.”

Labour might even be able to point to how certain policies might have put the government’s credit rating at risk – my understanding is that NZ First’s and the Green’s bank deposit insurance schemes could fit this argument.

The government's credit rating currently benefits from ratings agencies placing less weight on that government would bail out a failed bank here, with the Reserve Bank's open bank resolution policy and there being no government deposit guarantee/insurance in New Zealand. If introducing one means rating agencies rethink this position, the argument would be that a lower credit score would lead to higher government borrowing costs. (Peters' policy on deposit insurance regards majority-owned NZ-registered banks; the Greens want a broader scheme.)

Ardern and co. would be able to attack the National-NZF government from day one, and have the bonus of not having Peters stealing anti-National oxygen, as he has done particularly over the past three years while seriously vying for the title of Leader of the Opposition against Andrew Little.

I’m not saying this doesn’t mean Labour will not try hard to form a government with NZ First and the Greens. There are key areas of overlap. As I wrote earlier today, it looks like it will come down to whether NZ First accepts fitting in behind Labour to help push a heap of certain policies they agree on over the line, with all three parties getting plaudits (and blocking anti-farmer moves), against the scenario of choosing the tougher policy route offered by National, but the potential for more “we made them do this against their wishes” headlines.

But, sticking to the Budget Responsibility Rules does mean that Labour has a ‘get-out-of-coalition-talks-free’ card up its sleeve. They might emerge out of the next few weeks still on the opposition benches, but at least with the fiscal high ground. Add that to the criticism of English and Steven Joyce’s fiscal hole claim, and it’s a pretty strong platform going back into opposition on.

I wonder if Peter's policies are meant to be anything other than bumper stickers. For instance, cutting GST on basic foods - firstly how do you differentiate between bread, and bread rolls and bagels; secondly; how does the supermarket claim back the gst on the truck that carried the 'basic food' and the 'smashed avocado'. In reality it is a vast amount of compliance work for changes which would be swalloped up by super market margins. In reality Peters doesnt want it as a policy - he wants to sound good on a three-minute talk-back-radio sound bite.

Works well in the UK too

That's not going to happen as NZF and Greens both voted for them which leaves a huge hole in Labour finances in addition to previous hole with no provision for extra funding in the final two years.

Not just a hole - a gaping chasm !

"In reality Peters doesnt want it as a policy - he wants to sound good on a three-minute talk-back-radio sound bite." I suggest we wait and see what Winston Peters wants rather than make unfounded claims.

Is the potential $50,000+ annuity for life ( at a minimum), that is waiting for BE after he's 'DELIVERED FOR' two years as PM part of the remit much?

Get a new artist. That's a shocking drawing! It looks nothing like Bill English.

The puppet and the puppeteer!

If they all rule together, with all Parties joined at the hip,as a rule, we will all be better off, as we could all bend the rules regarding debt and inflation and profit from the outcome.

(A win Win all round, even with Winnie, who I voted for, I hasten to add, as I can add up, even if others cannot, it makes a change).

Of course this rule, only usually applies to National and sitting MP's, who as a rule, just sit on the a---es and fix their Salaries and Pensions as a rule, just before Christmas as a present... as a rule?. does it not always apply.

This as a rule, should amount to little, but as a rule, when all is said and done, rulers can do what they like.

As this rule applies to compounding debt, as a rule, it used to be forgiven when paid. All Banks used to follow this rule, as it meant you owned the House, not bet on it as a rule.

(But which is best..today, may I be forgiven to ask)

This rule, I followed from way back, when interest rates were 17%, so as a rule, I do not borrow.

By speculating as a rule, it follows as a rule to have as a rule, the rulers in ones pocket.

By using this rule widespread, it follows that 100% of MP's as a rule, would be far better than 46%.

Personally I think that we should all as a rule, follow our rulers example...sit on our arses...and as a rule, pay no taxes until all Speculators as a rule, should cough up the same as the rules apply to PAYE.

But as a rule, I am often wrong, just speculating on who to join with, as a rule...of thumb.

Uptick, if this rule should Apply.

Do not forget I do not make the rules, only suggest em, in the Countries ......INTEREST. as little as it is. the debt is huge.

Or you can hedge yer bets and follow this guy.

It would be interesting to have a research poll seeing who people would vote for now if there were an election.

Gives the impression of being in a position of strength, they have a lot to learn about the reality of being in Government. They are trapped left of Labour with no where to go, join the Nats but sit outside of Government to protect your future and have influence on policy now and make a difference

Gives the impression of being in a position of strength, they have a lot to learn about the reality of being in Government. They are trapped left of Labour with no where to go, join the Nats but sit outside of Government to protect your future and have influence on policy now and make a difference