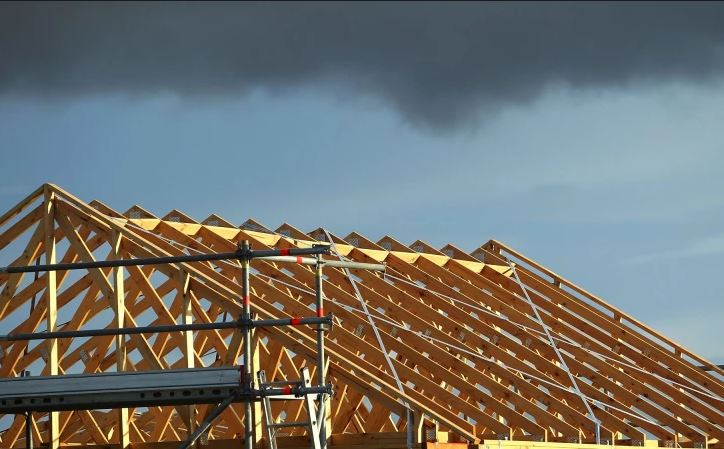 Annually since 2013 MBIE has released the National Construction Pipeline report. The reports include forecasts for national and regional residential building, non-residential building and infrastructure spending that are supposed to help with "improved planning by all participants in the sector" and with "scheduled investment in skills and capital".

Instead, the forecast for new dwelling consents in the 2018 report are likely to provide extremely misleading insights for firms planning for the future including scheduling capital spending.

The problem is that the forecasting approach used by BRANZ - the organisation that provides the residential building forecasts for the reports - is fundamentally flawed.

The 2018 forecasts for new dwelling consents effectively just add KiwiBuild on top of the current high level of building. The current high level of building is a result of low interest rates coinciding with high net migration. Only three times in the last 45 years have low interest rates coincided with high net migration. The super-high base level BRANZ is effectively adding KiwiBuild on top of is a rare event. It is highly likely over the six year forecast period used in the report that these two primary drivers of cycles in residential building deteriorate with net migration already in the process of falling.

Should you take any notice of BRANZ's forecasts for new dwelling consents?

The extract below is from page 12 of the 2018 National Construction Pipeline report and shows BRANZ's forecasts for annual new dwelling consents out to 2023.

If I was managing a firm operating in the residential building industry my greatest concern based on the forecasts above would be whether my firm had the capacity to deal with a 39% increase in new dwelling building activity over the next six years. I would be looking to significantly wind up capital spending and employment that would involve taking on more debt (i.e. leave my firm exposed if building activity levels ended up significantly lower than predicted by BRANZ and if interest costs increased significantly).

Appendix C of the report spells out the various assumptions behind BRANZ's forecasts although the guts-of-the-matter is spelt out on page 9:

There is no allowance for the fact that the Stats NZ projections don't take into account cycles in net migration that are a key part of building cycles while the BRANZ forecasting approach takes no account of cycles in interest rates that are also an integral part of building cycles. Interest rates have been the most powerful driver of cycles in new dwelling consents but there was no allowance for this or the likelihood of a cycle in interest rates in BRANZ's new dwelling consent forecasts.

Effectively BRANZ has started with the current high level of new dwelling consents (i.e. around 32,000 per annum) and added the boost required to "remedy already existing housing shortages" (i.e. the boost from KiwiBuild). By contrast, a key insight provided in our monthly building reports is warning clients not to add the boost from KiwiBuild on top of the current super-high level of building.

Understanding what drives cycles is critical to residential building forecasts

KiwiBuild doesn't sort out the most important factor that has contributed to the level of residential building running below the level justified by population growth over the last decade: a massive increase in section prices. But as covered in our monthly building reports, there are several reasons why it will make significant progress; especially the large injection of taxpayers' money the government has generously contributed.

However, the starting point for KiwiBuild is a high level of building by historical standards that is the result of low interest rates coinciding with high net migration as shown in the two charts below. Interest rates take approximately 12 months to impact on new dwelling consents and reflecting this, the red line in the first chart has been advanced or shifted to the right by 12 months with the same true for net migration in the second chart. 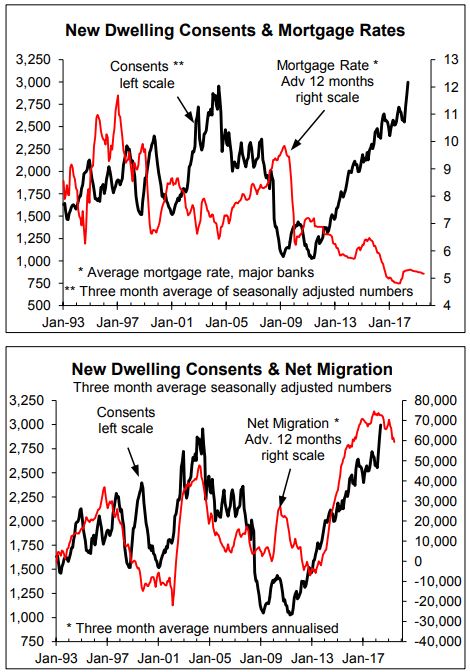 Net migration has already started to fall and is generally expected to experience quite a significant cyclical fall over the next few years, implying a significant slowing in population growth. Even the Reserve Bank predicts a significant deterioration in net migration as shown in the chart below from the May Monetary Policy Statement and for once we agree with the RB for the reasons outlined in our monthly building reports. 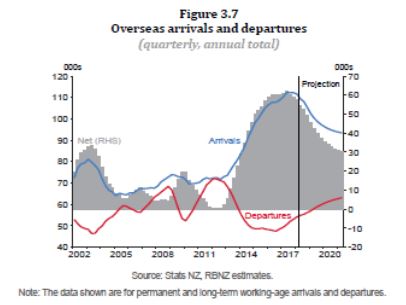 The BRANZ's dwelling consent forecasts assume away the likelihood that population growth and therefore a key source of demand for new housing is likely to fall significantly over the next several years. But just as importantly, BRANZ's forecasts take absolutely no account of the impact of interest rates despite them historically being the most powerful cyclical driver of new dwelling consents.

As covered in our building and economic reports, the Reserve Bank is again setting things up for another significant increase in interest rates.

Interest rates are unlikely to ever rise again while the world is under current conditions.

I'd hate to be a property investor/builder. Subject to the random whims of council consent; govt immigration policy, bank interest rates, planners approving new infrastructure. And when things turn to custard I would be the one making colleagues unemployed and leaving customers with half built apartments while the council bureaucrats, govt ministers and the bankers tuck into their dinner.
There must be a better way; some way of shortening the time between planning a build and a family moving in; some way of transferring consent fees to well after the property is inhabited; some form of semi-insurance to guarantee properties get completed not left as rotting skeletons while financiers bicker for months and years.

It used to be part of the kiwi lifestyle - buy a section, pay it off over a couple years or hold it while planning, then commission a builder.
Too risky now with financially unstable housing companies, defective building materials risk, consent potential issues, no clear liabilities avenues, less trust all round, unaffordable sections, etc.
This must be a big bottleneck on getting the needed 1000s of houses built - problematic avenues for the individual owner build.

Now you have covenants on too much of the land, preventing you from achieving that more simply too.

Blah, NZ homes are crap of very poor quality. You either want to build more homes to meet the crisis or throttle the supply to largely boost one generation's capital gains. Perhaps a better use of developer's time is to find fairly priced land.

If developers are willing to pay top dollar for land in this environment, more-fool-them, they are showing a lack of judgement.

The crux of the above story is:
"This information provides estimates of the number of new dwellings required to meet both expected population growth and to remedy already existing housing shortages." from Stats NZ
To just use this estimated info without modification is ummmm, rather bold to say the least! Incompetent springs to mind.
In normal competent organizations, sensitivity studies are done for variations for all sorts of parameters one by one to get a range of outcomes.

BRANZ should be trying to predict the economic cycle and extrapolate this to the building industry, but instead it seems that they have ignored the fact that the cycle exists at all. Pretty much makes a nonsense of the entire exercise. If they have been forecasting since 2013, it would be interesting to know how accurate their predictions have been so far.

I agree that net migration is going to reduce in the coming years. This will reduce demand for housing, which will have flow on implications for new builds. However, I’m not so sure that nz interest rates are going to rise as quickly as many are predicting. My view is that downward pressure on the market is more likely to come from much more cautious lending from banks. Internationally, interest rates may well rise soon, which will slow things down for us too.

We’re due for a slow down - it’s just that point in the cycle.

There are different types of immigrant - maybe the traditional Chinese investment immigrant (almost all are Chinese) and the average POM and Aussie arrive with plenty of money and take well paid jobs and therefore either rent or buy big homes. More recently immigration has skewed to students and many from 3rd world countries - they are far more likely to be sharing apartments; squeezed in like sardines. The manager of a city apartment block recently told me that the two bedroom apartments that used to have two inhabitants are now three or four inhabitants. Without analysis of the mix of immigrants and the locations they intend residing in these stats will be wrong.

I have no faith in any of the departments or regulatory bodies involved, they are the ones who landed us in this mess !

massive increase in section prices. But as covered in our monthly building reports, there are several reasons why it will make significant progress; especially the large injection of taxpayers' money the government has generously contributed

What govt contribution? Special Housing Accord etc?? Does that be make section price affordable? Not yet...

A bit like the Government underwriting landlords with accommodation supplements and working for families.

A bit like the Government underwriting landlords with accommodation supplements and working for families.

Actually, it's worse than that. The entire economy is reliant on and underwritten by accom supplements and WFF. Remove them and the ship would sink fast, including the benefits accrued to landlords.

We have some fundamental issues here (mentioned above) that will not be addressed by this government. They are Statists and want everyone to be similar. Statism is my 21st Century word for socialism or, if you prefer to refer to it from the inside of our culture (or what's left of it) extreme liberalism. These people couldn't run their own families without WFF in the real world so don't expect any changes any time soon. Sadly, it'll be another year or two before the new Nats are up to speed, but history tells us not to expect too much there, either.

Sadly, it'll be another year or two before the new Nats are up to speed, but history tells us not to expect too much there, either.

Huh? Are you suggesting that the National Party are not "statists"? Do you think they represent a libertarian's wet dream? I'll raise your "statism" with a "crony capitalism."

Firstly product needs to get the bureaucrat's stamp of approval at BRANZ or CodeMark, then another bureaucrat at the local council has to approve it (they'll be grumpy if you use anything outside the opoly products).

Then you've got the actual builders - it's usually two guys doing everything at a slow pace. Overseas they throw a half dozen specialists at the job and do things in a day. The NZ way it is to mess around and leave all the timber out in the rain.

All this carry on for a basic single story sh!tbox made from blocks of mud, pink chop stick framing and tin roofing.