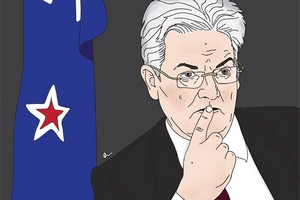 There is no need to need to review the structure of the security services in the wake of the Christchurch Mosque killings.

Both the SIS and the GCSB have already been heavily reviewed in recent years, made more accountable in their operations, and had their funding increased. The SIS and the GCSB are structurally quite different organisations from what they were five years ago.

Editor's note: The Government has announced a Royal Commission into the specific circumstances that led up to the Christchurch mosque terrorist attacks. Prime Minister Jacinda Ardern made this announcement after discussing the matter with Cabinet on Monday. The inquiry will see the New Zealand Security Intelligence Service, Government Communications Security Bureau, Police, Customs, Immigration and any other relevant government agencies scrutinised.

Indeed, it is barely two years since the Cullen/Reddy review, the first of the five yearly reviews of the security services, ushered in by the 2013 changes to the GCSB legislation.

The Cullen/Reddy review led to significant changes to the structures and accountabilities of both the SIS and the GCSB, and a significant budget boost besides. And the next regular review is barely three years away.

In the meantime, there are the periodic public reports of the Inspector-General on the operations and practices of both services, which always receive significant media coverage.

On the face of it, little is likely to be gained from a further review, albeit by a Royal Commission, of how our security services are structured, in the wake of the appalling events in Christchurch. That said, there is undoubtedly a requirement to look into the operational conduct of both organisations in the lead-up to the attacks, and why they both seemed so totally taken by surprise by them.

Because of the unusual and sensitive environment within which they work, the security services have always operated at arms length from the  government of the day, lest there be any suggestion of collusion, or politically inspired surveillance taking place. While there are good reasons for maintaining that arms length day to day separation, it may actually be part of the problem, although there would be strong resistance to bringing the security services under any tighter political control. Thankfully, no-one has seriously suggested that.

Nevertheless, it is a matter of huge concern that the build-up to the events in Christchurch was missed completely by the security services. Even more so, is the revelation since March 15 that the SIS's strong historic focus on Islamic terrorism and threats, has meant that very little attention has been paid over the years to right wing extremist nationalist threats and activities, even though there has been plenty of evidence such groups were active in New Zealand.

The question has to be asked how on earth can this be? Where did the focus on potential Islamic terrorism stem from? And why were right wing, ultra nationalist, white supremacist groups apparently ignored altogether? Is it an outcome of the institutional prejudices of the organisations over time, and if so, what drove those? Or was it driven by the world view of the other Five Eyes partners, principally the United States, for whom the Islamophobic focus was paramount?

Following on from that, we need assurances that specific, solid steps have been taken to overcome the deficiencies already identified and that the operational focus of the services has been immediately broadened to include all potential forms of subversion or terrorism, regardless of where their perpetrators might fit on the ideological spectrum. We need those assurances clearly and swiftly and we do not need to wait for a lengthy Royal Commission to get them. A public cross-examination of the Directors of the SIS and the GCSB, under oath, by a Parliamentary Select Committee could obtain the answers far more quickly.

So, why is the government apparently so keen to include a wide-ranging review of the security services as part of the Royal Commission's brief?

In part, it is a simple case of convenience - best to have it dealt with there,  rather than separately. And there is a certain logic to that, which is difficult to object to, if that is all.

But calls from the Leader of the Opposition about the need to revive the comprehensive surveillance that could have occurred had Project Speargun proceeded, and muffled statements from some Ministers about the trade-offs between more security and personal privacy raise afresh the spectre of additional intrusive powers for the security services, which should arouse more general public concern. Horrific as they were, the events in Christchurch cannot be used as a justification for further moves in this direction.

Yes, we do need to find out why the security services failed so badly on this occasion. And the situation does need to be rectified to ensure such a gross lapse cannot ever occur again. But, at the same time, we must be vigilant to ensure no more of our individual liberties are compromised or surrendered in the process.

Rt Sir Hon PB, all it means to me is, I regret to say, is summed up in the immortal words of Rahm Emanuel (Chicago Democratic Party Machine operative par excellence):

You never want a serious crisis go to waste...what I mean by that is it's an opportunity to do things that you think you could not do before.

How much information sharing is going on between police, immigration, SIS , GSCB etc.

You would think that anyone who is a foreign national who arrives in NZ then purchases a semi-auto gun would have at least raised a flag ..... or at least big data could tell you how often this occured.... I have a doubt no one has this "BIG" data, rather its all collected in small pools in disparet it systems.... none of it in a cloud, all behind firewalls, and interdepartment security barriers....

Maybe its time to move NZ gouvernment into cloud services... if only GCS/AWS had a DC in NZ...

After a case where permanent residents who had lived in Auckland for 9 years were found guilty of importing drugs and it was reported they had never made an IRD return I wrote asking INZ why neither they nor the police were matching IRD annual returns with residency visas. The answer from INZ was it would break privacy regulations.

'although there would be strong resistance to bringing the security services under any tighter political control. Thankfully, no-one has seriously suggested that'

Aside from this tragedy Canterbury has suffered the devastating 2011 EQ’s. The subsequent 2016 EQ and tsunami alert and the Port Hills fires. Unfortunately in all of these, civil defence’s readiness and reaction was found to be wanting, in quite a few regards. Those findings were of course in hindsight, no one saw the events coming, but precautions could have been better. For instance damaged buildings reoccupied or not isolated after the 2010 EQ. Abundance of long grass and dry growth on the Port Hills. I think Mr Dunne is correct in implying that beefed up and extended security measures would, sadly, have been unlikely to sufficiently detect the Christchurch assassin in time. It is virtually impossible to identify such an unremarkable and faceless identity, that walks amongst us. Instead it comes back to that word precautions. In this case he should never ever, have been allowed to get his tools of trade, so easily.

[ interest.co.nz is not the place to promote silly conspiracy theories. Please desist. Ed]

And did Labour and the Greens give him a hard time over it ?

Call it the turning of the tables , or Karma , or whatever you wish .