Terry Baucher says the first Wellbeing Budget has a lot of interesting initiatives but nothing stimulating from a tax perspective. But there’s always next year, an election year

Terry Baucher says the first Wellbeing Budget has a lot of interesting initiatives but nothing stimulating from a tax perspective. But there’s always next year, an election year 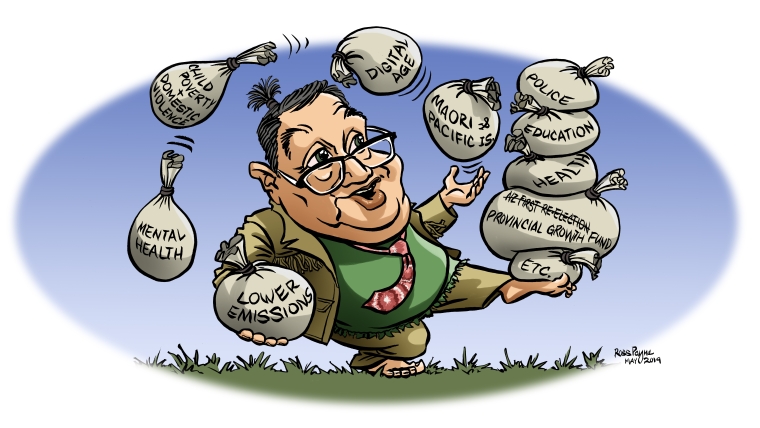 With the decision to abandon the introduction of a capital gains tax last month, Thursday’s Budget was always likely to be a quiet one from a tax perspective. The proposal to add GST to international roaming services announced last week is the only specific tax measure included in the Budget.

Tax revenue for the June 2019 year is expected to be $84.7 billion, about $400 million ahead of the half-year forecast. Most of the additional revenue is from GST offset by a decline in corporate income tax and resident withholding tax (the latter attributed to the fall in deposit interest rates).

There is also a one-off timing adjustment of about $500 million as a result of Inland Revenue’s Business Transformation programme.  Apparently, the changeover to its new accounting system in April enabled an earlier and more consistent recognition of income tax during the tax year. This change is estimated to add around $1 billion to net company tax for the year but reduce the net tax payable by other persons tax by around $500 million. (Inland Revenue is expecting to spend a further $400 million of capex over the next two years as it completes its Business Transformation programme).

This adjustment means that corporate income tax for the June 2019 year is estimated to be $14.8 billion, almost $1 billion up from June 2018. The income tax and FBT payable by individuals, and other persons is $37.4 billion, up $1.5 billion. GST at just under $22 billion is more than one billion more than June 2018. Finally, the $2.35 billion of resident withholding tax on interest and dividends is just $70 million more than 2018.

Interestingly, over the period to 30 June 2023 corporate income tax forecasts are $1.6 billion lower, mostly because of the expected $1.3 billion cost of the new research and development tax credits.

Over the period to 30 June 2023 the amount collected via PAYE is forecast to grow by $10.8 billion. Of this, $1.9 billion represents “fiscal drag”, that is the additional tax payable because thresholds have not been increased for inflation. (Remember these have not been adjusted since 2010).

Tucked away in the Budget Economic and Fiscal Update is a contingent legal tax proceedings liability of $144 million for the year to 30 June 2019. This almost certainly relates to Eric Watson’s Cullen Group ongoing dispute with Inland Revenue. Somehow I don’t see that contingent liability being realised.

What about small business?

Probably the headline item in the small business space is the new $300 million venture capital fund to help mid-sized firms (between $2 million and $15 million in size).  This takes $60 million from the assets of the existing New Zealand Venture Investment Fund and diverts $240 million of contributions from the New Zealand Superannuation Fund. (The New Zealand Superannuation Fund will still receive $9.6 billion over the next five years). It’s an interesting initiative intended to help start-ups grow successfully.

There’s a productive and sustainable land use package of $229 million which will help farmers and councils but no sign of the environmental tax measures suggested by the Tax Working Group.

Many of the other spending initiatives will directly and indirectly benefit small businesses. For example, there’s $60 million of operating and capex expenditure is budgeted to expand the use of the RealMe portal for accessing Government services. Another $7.1 million will enable both local and central government to deliver business-focused services on a common cross-agency digital platform.

Elsewhere there’s also an additional $8 million for implementing the Cyber Security Strategy. This is in response to “the growing scope, scale and sophistication of cyber threats”. I don’t imagine National Party researchers were identified as part of those threats.

Overall the first Wellbeing Budget has a lot of interesting initiatives but nothing stimulating from a tax perspective. Still there’s always next year, which coincidentally is an election year. Watch this space.

With bracket creep eating into the fat middle part of the income bell curve revenue growth outlook is super rosy. Even if growth is low so long as inflation keeps ticking along.

It's time Bracket Creep was called out for what it is: an inflation tax. The Government has a formal mandate with the RBNZ to ensure some inflation takes place, but then fails to even adjust for the inflation the RBNZ is betrothed to deliver.

If there was an equity, it would be required to adjust the brackets by the midpoint of whatever the PTA sets the desired inflation at. Not only do consumers lose out with state-mandated reductions in purchasing power, but they also loose more out of their pockets when wages do go up, regardless of it keeps pace with inflation or not.

CGT was going to be used to repair the brackets. Concerted misinformation by the "have's" managed to undermine it though.

Lets be clear.. there was nothing stopping them addressing the bracket creep yesterday. Nothing to do with CGT. Robertson knows he has spent all he has and them some and they need every cent they can get.

I suspect the rifle buy back will cost an awful lot more than they have budgeted. I have heard that it could run to several billion.

And I can 'budget' 6 bucks for a nice restaurant meal all I like... the fact of the matter is, no restaurant will entertain me for 6 dollars. Their totally unrealistic figure of 168m is a soap bubble balanced on a twig and will have all of that soap bubble's longevity. They will not secure more than 50-60% of the targeted firearms for that figure because no one who paid 5000 for a rifle is going to give it up to a corrupt government issuing poorly thought out diktats for a mere 1500. Fact.

its the 'Well, Boring' budget.

I expected to be disappointed given this government's performance to date, but this failed to meet my already low expectations.