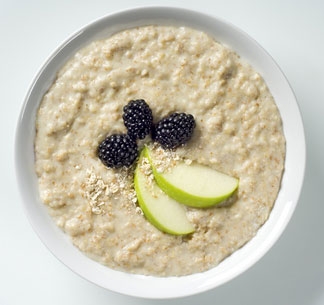 <p> Porridge; easy on the waistline and budget</p>

1) When the going gets tough, don't borrow - I think my boss fancies me. A complete idiot. For example, witness the virtual telling off I got yesterday about me getting a dog:

Time for a lecture that makes me look like a grumpy grinch with a heart of lead. ;)

Firstly. Life is long, particularly if you have a mortgage.

I get really grumpy with the youth of today who say life is short. It's long. We'll live to 100. Spending money now instead of repaying debt just extends the life of the debt and creates an enormous opportunity cost of interest that doesn't have to be paid.

I know you're in a great position in not having a mortgage.

For anyone who does have one.

I've worked out that not spending NZ$1,000 a year on a dog and instead using it to repay that amount extra on a NZ$200,000 mortgage would save NZ$27,548 and allow you to repay the mortgage three years and two months early.

Do I look Grinchy enough?

Mebbe it's because I still have a mortgage. Grrrr

I know he has my best interests at heart but pot, kettle, black, bow,wow, wow Bernard.
I'm not perfect but I'm sensible with my money. Rather than go into debt for a dog, I am working harder for it. Again, I found a sidestream that doesn't stress me out. Amen for that.
Like debt, stress can be toxic. Despite the fact that most people understand this intimately, they're embracing it.
Take my home country. While most nations were busy deleveraging post GFC, Canadians celebrated the fact that they're weren't American or European and went shopping.
Household debt levels there ( averaging 147% debt to income) are soaring as people take advantage of the super low (1% BOC) interest rate environment. (Read "Record household debt could be Canada's undoing" in the Financial Post).  Compare global official cash rates here.
In the U.K. a similar trend is occurring. Excluding mortgages, the average household debt is £9,070. (See Guardian Money article for more here). The experts described the phenomenon as "stress borrowing.''
I'm quite content to remain a renter despite the fact that most of them are reportedly grumpier, as it means I don't have to stress myself out with a mortgage noose around my neck for the next 25 years.
Good luck with the mortgage fast tracking BH. Don't kick the dog huh? They're meant to reduce stress.
2) Breaking the mold

Mother's guilt is something else. Working mother's guilt is particularly potent. If we're not beating ourselves up over the lack of time we spend with our kids, we're invariably berating ourselves for falling short of the '50s ideal of the crafty, creative, home cooking mummy making fresh muffins for after-school play dates.

Quite often that's because we're either thinking about work or doing it on the side when we're meant to be fully present and engaged at the playdough station.

I've had to let go of that albatross. I take heart from the endless comments I've had recently about how polite and well behaved my sons are that I'm not a total screw up in the mother department.

Working is a reality many have had to accept. Most working moms I know enjoy what they do, they just struggle with the rigid frameworks for work and also social expectations.

This blog from freefrombroke.com describes the new reality facing many families who are having to break the mold to make their finances work for them.

I'm sure it'll resonate with a more than a few dual income families.

Conventional investment theory holds that it's time in the market that counts most, not your efforts to time the market. Recent experience challenges that notion, with many Baby Boomers still trying to recoup loses from the market meltdown brought on by the global financial crisis.

One investment strategy that presents itself as a solution to this conundrum is dollar cost averaging. That's where you buy into the market on a regular basis, just chipping away for the long-haul. KiwiSaver works this way.

Barring very extreme measures (which I'm not prepared to take or lie outside of my current realm of reality) I will not be retired by 50.  I admire the chutzpah and dedication of those who have kissed goodbye to working life before their hair has grayed.

A kind reader, who I suspect is on this path, offered up this link yesterday for the benefit of those who might be thinking of going this route. The blog lives up to its handle and contains some extreme advice. I'd be consulting with a nutritionist about the long-term impact of living off a diet of rice and lentils. This guy has a $70-$100 a month grocery bill. Wow!

5) Anything you can do we can do better

Some might mistake me for a raging feminist. I'm not. If my story selection is any way gender imbalanced it's probably because I'm short of female company at the office. Maybe Mazzy will even the score.

I was encouraged and interested to spot this article in the Guardian which reports that womens' saving rates for retirement have reached a seven-year high. According to a survey, women in the U.K. are proportionally out-saving men for retirement, if only slightly 12.9% to 12.6% of income. Men are still saving more on the whole because of inequity in gender pay.

We'll get there. Tables are turning, however slow.

I loved the porridge picture.

You can't go wrong with porridge in the morning.

I shall try very hard to avoid kicking the dog.

Guys, the balance is always right. Just take into account your parameters (age, income, needs and wants). Life is big compromise between "WANT" and "CAN". Cheers.

Loved the early retirement extreme, I could do that but doubt the other half and son would agree.

I think I'm the kind reader who provided the link to the early retirement site. I have to say that it is as much a philosophical site as it is financial and it is very good at focussing your thinking.I'm 46, have a modest income but by leading a non-consumerist lifestyle and arranging my life in a fiscally responsible way I save over 50% of my salary. Next year should be my last year of work and any work beyond that will be on my terms if and when I want to.

Good for you neili....join the rest of us who grabbed the chance to escape the ratrace. It all starts with an understanding of the bank credit trap set for the suckers who wouldn't know a serf if one landed on their roof.

Try a life on the road in a campa.  One only needs a batch for a base. Careful though because the traffic police are soon to be joined by the mortgage police hunting for those who escaped.

A big round of applause! Congratulations. Did you get by without going on the strict lentil diet?

Pure luck Amanda...mine is not a course that most could take...but that does not remove from the point made by neili....a frugal lifestyle combined with effort to earn and save will allow the escape.

Not to mention the usual shiftless BB inheritance windfall(s), along with the healthy dose of online fantasy.

But hey, thanks for playing, Wolly!

Pretty simple really Amanda, made some good money in my 20's working overseas and saved most of it. Returned to NZ, bought a house and paid it off as fast as I could. Kept working (teacher) and resisted all the trappings e.g no i-phone. Eat at home ,except for special occaisons,always driven a car 5-10 years old (reliable but no big capitol outlay)read a lot and garden a lot.

Meanwhile my 20 year old nest egg just keeps getting bigger, the share market worked well for a while but I'm a bit timid at the moment and am happy to have cash in the bank. (4.5% on call ready to jump quickly when I see  a bargain) Current net worth? House $400k,commercial property $600k, cash$400k. Debt  = zero.

Spent the last 10 years as a single parent but the oldest boy is at un and the youngest leaves home next year, hence retirement Dec 2012.

Not the usual  story .....(teachers seem to be the most fiscally irresponsible people I know and don't get me started on the PPTA strike last year...) But early retirement seem that hard if you organise things early enough

Nice one. I'll uphold your observations re teachers. This is a big problem as they are meant to be teaching future generation how to avoid current problems. Fantastic you achieve what you did, especially as a solo parent. Not easy.

#4 Gotta say retiring by 50 isn't my dream. I may be weird, or a workaholic, but I'd get really bored if I didn't work at all. I do have lots of hobbies and I know I could easily occupy a lot of my time but still, I'd feel pretty useless if I didn't work at all (and also no more little kids to look after at that age).

For me, part-time work is the ideal compromise. Gives me plenty of time for other stuff while keeping my brain entertained & my bank account healthy - perfect. So I guess I can say I'm as retired as I'll ever be (or want to be) at 36 :)

I hear ya Elley. If I win the lottery tomorrow, I'll still be busy, probably doing much the same stuff I'm doing now. Love what you do and you never work a day right? Great you have created a rich work/life balance early in life.

Sorry, but we won't all be living to 100. Our telomeres won't allow it.

Elley- retirement is not really a dream but I've got some things I'd rather be doing,e.g more gardens and more travel, but I take your point . Perhaps retirement is the wrong word..... 'my time'  'follow your heart time'  ???

That's a perfect way to frame it.