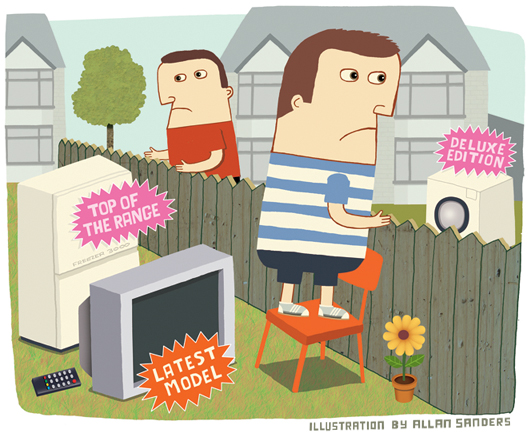 The Financial Services Council (FSC) released a rather shocking insurance report this morning. According to a two-year long research project studying insurance cover across a range of categories, New Zealanders are under-insured by around $650 billion.

This is how it broke down in terms of levels of under-insurance.

Peter Neilson, the chief executive of the FSC said the research painted a serious financial risk for New Zealanders and their families should either the main or secondary income earners or both have their earnings impaired.

For the first time in years, my life insurer has been in touch seeking a "review" of my circumstances. I will report back to you after that conversation as I'm curious to know how it will go.

2) Financing the world you want

Several studies have found that women make great investors (they're more conservative, they take time to understand what they are investing in and establish a level of trust first before blindly handing their money over to a manager) and yet the majority are painted as shoe loving fools who are going to be poor in retirement because their knowledge of money doesn't not go beyond the domestic level.

This is an issue I have tackled in my book as well. I guess I know a lot of clever gals because most of the ones I know are excellent money managers and not just at budgeting for the household.

The Harvard Business Review has some interesting insights and stats on this topic and some solid advice about conquering fears in finance to achieve your dreams and goals.

You've all heard of it before I'm sure: The Keeping Up with the Jone's Syndrome, a financially debilitating consumer disease that has so many people bent over a barrel with their money because they keep buying stuff their neighbour does to satisfy the ego and create the illusion of wealth. It's also been called Affluenza.

Funny enough, I have this friend who has developed a rather acute case of what I have diagnosed as the Anti-Jones syndrome. While they have all the trappings of wealth, they have become completely disillusioned by them. I've been thinking of a way to capture the virus and create a minor epidemic.

A blogger by the name of beatingbroke contemplates a cure to the disease in a more sensible fashion.

4) Never too late to save

Early savers will have a major advantage over their late saving counterparts because of the magic of compound interest. For those late bloomers, it can be hard to know where to start particularly if you've left it until your 40s. The key is just starting. Here's some thoughts from FinanciallyPoor.com. (Note I do not necessarily endorse the views and recommendations contained in some of these blogs. Just food for thought to get you thinking about your own personal circumstances.)

For several people I know 2013 is a year of new beginnings. New relationships, rebuilds, new businesses, new jobs, goals. For those start-ups out there, this one is for you. Inc.com looks at the importance of treating your employees as a family for optimal productivity, and profit.

Agree.  I think of it as a team rather than a family.  A coach can bench you or even dump you, but that can't really happen in a well functioning family.

LOL.....yes.
1) I'll add that the "smoochers" get to go to technical conferences, yet are clueless techically.  Come back having spent $100k+ on a black box(s) and hand it to you expecting it to be setup and running inside a month, but wont pay for training, even an online course. The number of times we have found the black box fixes a problem we dont have or simply doesnt fix a problem we do have isnt funny.  Oh and then the finger pointing starts as the vendor and/or manager blame you for not knowing how to do it properly (re-visit your request for training that never happened). Usually after some considerable further effort the $100k black box gets quietly dumped in a draw somewhere and forgotten about because it actually doesnt work...just in time for the next year's technical conference to come around again, rinse and repeat.....doh.
2) The "Dont bring me problems bring me solutions" reply is the other over abused classic. Frankly I go to the beloved leader(s) when I have a problem I cannot solve, or its a political decision outside my remit.  If I have the solution I do it and maybe bother telling them later...but really as the eyes glaze over I dont bother any more.  Its like the dummy steering wheel you give your 5 year old in the car, they think they are driving, while you do, so everyone is happy.
;]
Last para, very well said, I wish....
regards

Under insured....humbug...sodding insurance outfits out to boost profits again.
My guess is ppl are opting out of property insurance too...the costs are now too much for too many...
Insurance is a bit like paying for shoes...for your size 8s you pay the same as a  Hobbit does for size 16s...Insure your 100 year old wreck of a house for $300,000 and pay the same premium as the owner of a brand new house...yet the wiring in your wreck is a fire about to happen..the plumbing is stuffed...the water tank is rotten...the chimney stack leaks fire into the ceiling space..and a small quake will be the straw to break the back of the rotten piles beams and joists....
Let's ask Peter Neilson to explain why his insurance friends fail to match premiums with risk!

Surely to some degree thay are talking their own book up.  By what measure is someone's life under insured?

I'm not sure Mr Beating Broke has quite nailed it there, reducing all the reasons for the trend to one - the need for acceptance and fear of it's loss.  Whilst everyone is somewhat different in this regard, missing are whole classes of things such as jealousy, envy, pride and lust.

On top of that the solution is just to give up doing it and change your social circle.

We are waiting for  Peter Neilson to explain why his insurance friends fail to match premiums with risk.

Because they match premiums to profit.

A big one too.
Its one of my pet hates.  I think of my father payiing into a scheme that was 10% of his wages in the 50's and cashing in 30k 45 years later, while AMP sat on property protected from inflation making a fortune off the working man. Bastards

My dad did the same but with T&G.
There he was waiting for a reasonable payout but alas he would have got more sticking it in the bank himself and allowing for compounding interest.
His great travel plans were quickly shelved.

My dad did the same but with T&G.
There he was waiting for a reasonable payout but alas he would have got more sticking it in the bank himself and allowing for compounding interest.
His great travel plans were quickly shelved.

Wally,
Read the death of a hero link, I posted on 10@10.
Why did the USA do so much damage to harmless people in Iraq?

To answer that AJ..pays to realise the infrastructure was part of Saddam's systems and as such a target. Ppl tend to forget all too quickly what Saddam did to Kuwait and many ppl there, as well as to plenty of Kurds in the north of Iraq with the chemical weapons.
IMO the only blot on the American book, is the way they helped put that slob into power.

Wolly, seriously - this is the most sophisticated military in the world. You have to be absolutely brainwashed if you think they cannot achieve regime change without that kind of civilian disruption and carnage.

We pay so much in taxes to the all encompassing welfare Nanny State , why do we need to pay extra for frigging trauma insurance , or permanent disability insurance ?

..... if the behaviour of the insurance companies in the aftermath of the Christchurch earthquake is anything to go by , Kiwis are very sensible in " flipping the bird " to the industry's lessor known insurance products

"Funny enough, I have this friend who has developed a rather acute case of what I have diagnosed as the Anti-Jones syndrome."
Makes 2 of us...(at least).
Somehow many ppl seem to be buying what the want and not what they need, or looking after what they need...that needs to be turned around.
regards

I think these income protection policies are a scam personally.
regards