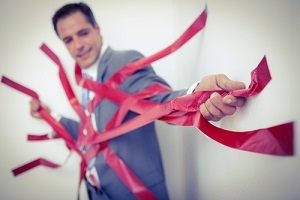 Frustrations are mounting, as foreigners keen to do business in New Zealand are getting tangled in red tape aimed at regulating overseas property speculators.

EY tax partner, Aaron Quintal, warns the new laws requiring “offshore persons” to have a New Zealand bank account to get an IRD number, are causing headaches for virtually all foreigners wanting to do business here.

The Land Transfer Amendment Act 2015 and Tax Administration Amendment Act 2015, which have been enforced since October 1, require anyone wanting to buy, sell or transfer property in New Zealand to have an IRD number.

To get this number, they have to open a bank account in New Zealand, and thus go through a bank’s anti-money laundering (AML) and counter terrorism financing checks.

While these laws are aimed at ensuring property speculators pay their fair share of tax on gains from property sales, they also implicate foreigners who don’t have interests in property.

Quintal says the problem is AML regulations make it near impossible for them to set up bank accounts in New Zealand without physically going into a branch.

He explains a non-resident company trying to send a piece of equipment to New Zealand, like an oil rig for example, will need to get an IRD number to deal with non-resident contractors’ withholding tax.

However the company doesn’t want to have to fly someone to New Zealand to pop into a bank and open an account, especially as it was always going to be paid in its offshore jurisdiction.

“Banks want directors to come in and sign stuff in front of them and show them their passports. If directors are sitting in Norway, they’re not going to fly to New Zealand to open a bank account,” Quintal says.

“We’re certainly finding it holding stuff up… even if it just adds a couple of weeks to the process.

“The IRD already has its own checks before you get an IRD number – it’s not that easy to get one. Adding this extra hurdle just seems to cost a lot, without adding much to the level of robustness around issuing an IRD number.”

Quintal says small to medium-sized firms are finding it particularly difficult, while larger ones may already have affiliated companies or subsidiaries in New Zealand sort out all the bank documentation.

“New Zealand’s got this ranking in the world for the ease of doing business, and this little thing is causing real problems for our clients,” he says.

Law needs to be narrowed

Quintal says the law could’ve been narrowed to only target foreigners with property interests.

EY red-flagged this concern in a submission it made on the Taxation (Land Information and Offshore Persons Information) Bill 2015, to the Finance and Select Committee in July.

The IRD also voiced its concerns in June, in its Regulatory Impact Statement on the Bill. It suggested the status quo remain, so people don’t have to get a New Zealand bank account to obtain an IRD number.

It noted the compliance costs associated with implementing the new rule – for foreigners and the IRD – outweigh the benefits.

The IRD said: “Our view is that, although there may be short-term gains, these are difficult to quantify and there will be no net benefit to the tax system in the long run. Any advantage is likely to be limited to non-individuals, and even then only until such time as AML Phase 2 is implemented.

“Inland Revenue has looked at international precedent and is not aware of any comparable jurisdiction that requires evidence of a domestic bank account as a prerequisite to obtaining a tax identification number.”

The Labour Party also weighed in on the debate, red-flagging similar issues to the IRD and EY, in its comments to the Finance and Expenditure Committee.

“If there is a concern about the housing market, we could’ve come up with a rule that was more specifically targeted at those people,” he says.

He recognises it’s still early days, but suggests the law be tweaked before the costs really start adding up.

Banks could be more ‘pragmatic’

In the meantime, Quintal says banks could be a bit more “pragmatic” dealing with foreigners trying to set up bank accounts to get IRD numbers.

He says they often require an IRD number to set up a bank account, making things impossible for those trying to do the opposite.

While bankers with higher up positions take a counter stance, he believes this doesn’t filter down to front-end staff, wary of meeting tough new AML requirements.

Quintal maintains there’s room for banks to be reasonably flexible in the way they go about implementing AML rules, even though the new regulations are tough.

i have the same problem just opeing a personal bank account in australia or many other countries.
its about time we toughened up to match our neighbours

Nah, I have an ASB account and needed to set up a Aussie account for share dividends etc. Went to the CBA - no problem, was easy as, just took a while to prove ID as cant waltz in to branch with it. But still not difficult. Gave good service actually - should do, they make enough profit from us!

Diddums - I don't know if the concern is people from Norway. Remember the item last month from Interest.co.nz about the welcome sign at the airport for John Keys Money laundering centre - there are many ways to launder money apart from buying a house.
Try setting up a business in the home country of the people that are complaining, good luck.

Tha ASB have always been good with CBA account access. I do not know now but they also had connections to setting up accounts in UK.
I had no problem opening a HSBC account in Australia from their NZ branch when a premier customer.
Even 10 years back the ANZ did not even know how to contact ANZ Australia to get one.
For UK. Even if the UK banks are difficult then banks in Jersey appear to have a connection to the UK system especially where a share broker demands a bank for transfer of funds in and out.

The example Quintal uses is a little unfortunate. If the Norwegians send an oil rig down here, the capital value alone would justify a director sitting in Oslo getting off his butt and flying down here, business class of course. If that wasn't enough incentive, while Norway is a country of outstanding natural beauty, all Norwegians that I have met and I know a few, would jump at the opportunity to get down here for a little mid-winter break. Those fjords can blow an icy wind at times.
That last piece about banks being "pragmatic' confuses the hell out of me. Is EY suggesting that senior bank execs should circumvent AML requirements? Sacre bleu!
Probably just pitching to be the major sponsor for John Keys South Pacific Money Laundering Centre.

Trying to do business with the New Zealand finance industry from overseas is a nightmare. Each institution has its own set of what documents are required, and what form of certification or notarization is necessary.

There is an unwillingness to accept that things might be different elsewhere in the world.

Example: mobile phone numbers. It is not uncommon to be unable to enter an overseas phone number, as it does not have a New Zealand network identifier (027 021 029 etc). Similarly an insistence on posting mail to a residential address in a country which does not have residential postal delivery.

I am sure the requirement that somebody fronts in person has deterred thousands of dodgy people coming here. Good thing.