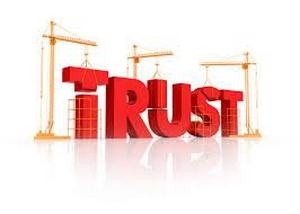 Just 48% of New Zealanders have complete trust in banks to keep their money safe and protect their personal information.

That concerning statement comes from an EY consumer banking survey. In a world where cyber crime and cyber security are often in the news, it's perhaps not surprising that consumers are worried about the protection of their personal information. But that so many Kiwis appear concerned about banks keeping their money safe does seem surprising.

A phone survey of 2,000 New Zealanders was done earlier this year as part of a global survey by accounting and financial advisory firm EY.

Asked whether he was surprised by how low the NZ result to the trust question was at 48%, EY advisory partner Paul Roberts said he was.

"Yes. If you look at the lack of alternatives [to banks] in New Zealand. To only have 48% of people who completely trust banks, including keeping their money safe, that was a surprise. That was very similar broadly to what we've seen around the world," Roberts said.

He noted there are few alternatives to mainstream banks in comparison with other countries such as Britain, where there's the likes of supermarket group Tesco and now online banks providing banking services.

"If you look here what's the alternative if you don't trust the bank? Is it to put it [money] under your mattress?" 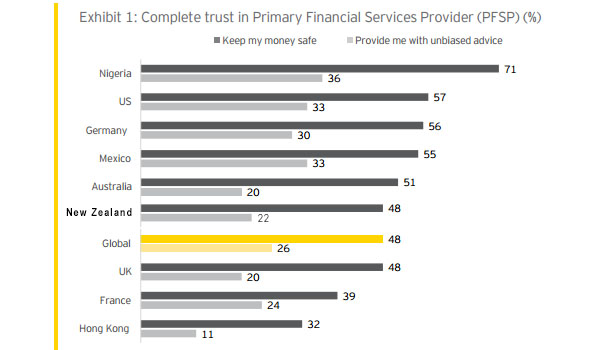 Other results from the survey show 22% of NZ respondents have little or no trust that banks will provide unbiased advice. Additionally, half those surveyed describe themselves as digitally savvy, with 44% of digitally and financially savvy NZ respondents saying they're less reliant on established financial services companies and banks, and 31% say they're excited about the emergence of online only financial service providers.

Key reasons for considering banking alternatives are more attractive rates and fees, access to different products and services, and the ease of setting up accounts.

"They were quite surprised, particularly on the trust element. Probably more in terms of keeping dollars safe, which I think they would consider their bread and butter. We go to banks because we actually trust that we're going to get our money back. They were less surprised in terms of the unbiased advice to customers," said Roberts.

Meanwhile, in an EY bank relevance index of 32 countries, NZ came in third, behind Finland and Germany, with a score of 80.6. The global average was 75.1. Denmark, Norway, Sweden and Canada followed NZ, with Australia eleventh. But even with this high placing, Roberts said NZ banks shouldn't be too cocky.

"I think that New Zealand banks certainly can't sit on their laurels in terms of that ranking of third overall."

He points to Britain, Singapore and the USA who ranked fifteenth, nineteenth and twenty second, respectively.

"I believe that is actually due to the emergence of alternatives in some or all parts of what the banks do. Those customers that are most willing to try alternatives are those that are digitally savvy. So people that want to actually manage as many aspects of their life via digital channels as they can, and that approximately 50% of [NZ] people who are digitally savvy, these are also the customers who are more likely to consider alternatives, particularly those where alternatives can be made simpler," said Roberts.

"If you get a disruptor that comes in with a simpler product that has lower fees and offers a better customer experience, then I think the banks, the traditional [NZ] big five, are at risk of losing parts, or all of their business." 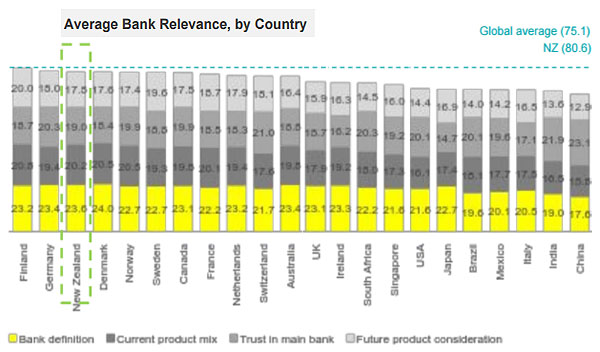 Watch out for banking's Uber or Airbnb equivalent emerging

Roberts suggested the key thing for local banks to focus on is remaining relevant to their customers.

"Because whilst we don't have a lot of alternatives in New Zealand at the moment to the big five banks, they are coming. And if you look to the likes of Uber and Airbnb, whilst we didn't actually have them initially, they did come and so these competitors are going to actually come in and target portions of their [banks'] business. So they need to actually start thinking like some of these more innovative companies, start ensuring that they are relevant to their customers by providing them with the types of experiences their customers want," said Roberts.

NZ does have a fledgling licensed peer-to-peer lending industry, plus a few finance companies and building societies offering an alternative to banks. However, Roberts is convinced additional new "fintech" challenges are imminent. Asked how soon and what type, he said answering this question would be a guess.

"If I look at the speed with which Uber and Airbnb emerged and went global, I don't think anyone would have actually picked that. So I wouldn't put a timeframe on it, but I think it will be sooner rather than later," said Roberts.

"We're at this point now where the banks are the only game in town for a number of these services, and as alternatives actually emerge, I think we'll actually see consumers choose for certain services to switch to some of these other types of provider."

Surely the 22% of customers who believe banks offer unbias advice need their heads examined? A bank is a business, they make money by selling you financial products and services. Of course they are going to tell you you need every product under the sun because the person sitting across the desk is financially incentivised to push products. Their service isn't unbias.

I'm amazed the trust level is so high. Hangover of older people used to a bygone time of professional ethics and regulation? People who haven't heard of the OBR? People who didn't understand the question and answered at random?

48% of us trust the banks and yet 100% of us have money in the bank.
If there was a guarantee of some sort 100% would trust the banks.
Apart from that where can we put it?

Not to soon there mate , there are many of us with no money in the bank

Really they're surprised?? Have they (The Banks) not noticed the events since 2008. I know we're on the outer end of the world but we do have the internet and other media outlets.

All I can say is be very careful of Banks and other financial institutions, particularly with their shares options and bonds. Here's a very good example as to why and what has happened in the very recent past when an economy goes haywire.

For the trust issue - do we trust any of the big corporates ? Think phone companies, think petrol chains, even government departments. It seems we have an ethics gap.
My office fibre went off line most of this morning. Which the IT guy indentified as a telephone company issue. There will be no explanation, and Spark has made sure that there is no channel to even ask the question. Meanwhile I give them lots of money.

I feel there is an opportunity to set up a "Rogering Award" and a "Pinnochio Award " among our esteemed corporates. (The winner has probably taken all anyhow).

For the most part , I trust the banks will not collapse , but they are a profit driven business just like any other when it comes to shaking you down .

I would have to agree.. If money becomes data... Data can be stored many places, why would you need a bank? .. Perhaps as a guarantor but there would be much more competition. The days of vaults and tills are drawing to an end.

I agree, its no longer a hard currency and backed by a stack of gold, these days its just numbers in a computer.

There is of course that legislation that got passed years ago without objection that allows the government to give you a haircut and take all or part of your savings to bail out the country. This is not very reassuring for those that are in a position to save. Hardly surprising we all put money into housing is it ?

I think the trust level would fall sharply if more Kiwis knew that NZ is alone among developed economies in not having a deposit guarantee scheme. Even the RB has recognised that the current system is inadequate and they have asked for submissions on a proposed Dasboard scheme,to give depositors more information,the idea being that we could then make more informed decisions as to where to put our money. I have made a submission and among the points,I have suggested that without a sustained nd widespread information campaign,this will fail completely and will serve only as an a.... covering measure,should there be a subsequent bank failure. I have spent some time recently asking people what they know about OBR and as I expected,the answer is virtually zero-and that includes front-line bank staff.
I currently use 4 banks for this reason.

I'd be willing to bet that it's a very small minority who know about the OBR and lack of a deposit guarantee. There was lots of publicity when the guarantee was put in place in 2008 and applied to selected finance companies, but total radio silence when it was removed.

for the debt junkies it is meaningless,the banks own their house,maybe their car too,maybe the insurance,if you read the mouseprint they can take what they like if things go wrong.they are hoping a banking collapse is as likely as a zombie apocalypse.

While there maybe no deposit guarantee in New Zealand can you imagine any government not entering into the fray if a Bank collapsed? If they didn't they would never get elected again. Never the less I think linklater01 is wise to use 4 Banks