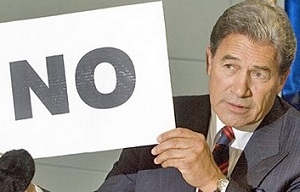 The New Zealand First leader Winston Peters is pledging to block the sale of UDC Finance to a Chinese conglomerate, if he is in government.

ANZ has agreed to sell New Zealand’s largest asset financing company to the HNA Group - a giant on an acquisition spree - for $660 million.

Yet Peters says the government should “draw a line in the sand” and use its powers under the Overseas Investment Act 2005 to stop the sale.

“We have outsourced our financial sovereignty at great harm to the economy,” he says.

“It is one of the reasons why the Reserve Bank admits its Official Cash Rate is largely an irrelevancy. Foreigners are calling most of the financial shots and enough is enough. Until a majority of the sector comes back into Kiwi ownership there must be no further such sales.

The sale will in fact go before the OIO as ANZ is seeking to sell a New Zealand business asset worth more than $100 million to an overseas investor.

The potential New Zealand buyer Peters is referring to is Heartland Bank, which has a sharemarket capitalisation of $783.69 million.

Asked how confident he is Heartland actually has the funds/capacity to make the purchase, Peters doesn’t provide a clear answer.

He says: “Anyone who has been following UDC since its sale was first mooted knows that Heartland has been especially keen, with TSB also reported as a potential suitor.

“Then again if ANZ wanted to prevent a domestic competitor from growing, selling out to China’s HNA Group makes a lot of sense.”

“HNA Group turns the plotline of the movie, The Big Short, into real life. Here is a company which slices and dices its finances so complexly, no one truly knows the real picture. What is for certain is it has access to free money with Bloomberg revealing interest on its billions of debt is 0.1%.

“What happens when that House of Cards collapses? New Zealand First is not against inwards investment but unlike this government we’re against being used and we need to take back control.”

Under the Overseas Investment Act, the Finance Minister has the ability to give the final sign off on a decision before the OIO.

Asked on which basis he would decline HNA’s application to buy UDC - if Finance Minister - Peters says: “Section 18(b) of the Overseas Investment Act stipulates that an applicant must show demonstrated financial commitment to the overseas investment.

“HNA Group is a byzantine conglomerate that is engaged in highly leveraged transactions across a disparate range of industries and resembles a House of Cards.

"Section 18(a) of the Overseas Investment Act requires experience in managing New Zealanders but its track record is that of the financial wild west and the antithesis of UDC.

“In December 2016 it paid 25% above the market rate in Hong Kong for residential land (at HK$13,600 a square foot) and these sort of dealings here could expose UDC and New Zealand to risk.”

Yet Peters says: “Given the OIO’s record they would probably rubber stamp any deal against New Zealand’s interest or not and not be held accountable by the government because these politicians are in the thrall of foreign ownership…”

Asked whether he believes the Act needs to be reformed, or simply interpreted differently, Peters says: “The OIO Act is a buggers muddle. It does not require a floor for overseas ownership of any industry or sector and seems to operate like an honesty box with little money to verify claims or data.

“The $100m test for business assets is ridiculous and we’d drop that because the chips are heavily stacked in favour of the investor and in the case of business assets, there is not even an NZ interests test as there is with land.

“Frankly there needs to be prominent advertising of any asset, be it land or a business and if a New Zealand entity can buy it, then they should get a fair-go. If the offer is too low there are alternatives especially with business assets that include listing on the NZX. Selling overseas is too easy and is a default option.

“Finally the OIO needs to be resourced to police the conditions that it sets.”

Winston choosing his targets well, I think. $46 billion of Chinese "investment" into NZ in 2016, almost exactly equal to our total exports of $48 billion. We do need some reasonable restrictions on foreigners buying up the country. Perhaps a reciprocal arrangement or just a maximum total amount?

Real issue here is our ongoing current account deficits that can only be financed in the absence of a QE program by borrowing and asset sales.

If we restrict asset sales we need to think through how we propose to fund our savings shortfall.

Services will come in positive but nowhere near enough to offset our funding shortfall.

IMHO a C/A deficit for 47 consecutive years in a supposedly mature economy is indicative of an overvalued exchange rate.

The Singapore currency board makes a lot of sense for a small open economy. We know it works - so that's a pretty good tick for a pragmatist.

Our exchange rate has nothing to do with fundamentals - just interest rate differentials - hardly the basis to evaluate new export initiatives.

Our exchange rate has nothing to do with fundamentals - just interest rate differentials - hardly the basis to evaluate new export initiatives.

Are you sure? Read more

The causal linkage is not that our low saving rate causes the current account deficit. The capital inflow and the current account outflow are just the two sides of the same transaction; the debit and credit entries if you will. It took me ages to figure that one out. You have to apply double entry bookkeeping logic, not "a" leads to "b" type logic.

So, less capital inflow automatically balances less current ouflow on imports, the exchange rate must adjust in a chained relationship.

When I read about the sale all I could think about was how much money would be channeled through the books with arousing suspicion. National love selling off every part of the country. Ask yourself how financially savvy someone is if they regularly take their stuff to cash converters and then look at National's behaviour.

National is down at Cash Converters.

Labour is shopping between Finance Direct and Geneva.

The Greens are on their way back to Epson for 10,000 more cartridges.

Winston is in China.

And there is some guy in the corner muttering about cats.

The country couldn't be better.

He's always well researched. Love the line "honesty box" when referring to administration of the OIO. Good that Heartland and TSB are keen.

Who could disagree with bring home the bacon, when we are so in hock to the rest of the world :-)?

We have such a good record with finance companies which are NZ owned. Hanover, Bridgecorp, South Canterbury Finance etc. If only I had of invested in those.....

My adviser said something about diversification, so I flushed my money down 6 different toilets instead of just one.

Not if you were a shareholder (see https://www.nbr.co.nz/article/scf-saga-rolls-even-liquidators-finish-19…).

Also not a great money making model for NZ Inc... NZ Taxpayer's funding greedy oldies from Timaru for money flushed down the toilet. If you can afford to invest in risky investments then you can afford to lose it.

Better a foreign owner who is making money and paying taxes than a NZ owned joke who needs bail outs by NZ Taxpayers.

I would like to see UDC come under NZ ownership,but I doubt if either Heartland or TSB could realistically afford the purchase price. Sadly,given our increasing trade dependence on China,stopping the sale now,could have unwelcome ramifications.

Does it matter who owns UDC,after all no one is compelled to borrow from them and there are options out there.

The profits are already offshore.

Exactly - so, as I said, why not bring home the bacon?

Be great to expand the NZ business base.

Be great to expand the NZ business base.

Just think about the $4 billion that we loose to Australia each year because we sold them our banks (for a song c.f. $4 b/yr)

I am personally in favour of Foreign Investment , but with one rider , I would like the investor to be someone we can all trust , especially with dividend remittances to the overseas parent , which is a minefield .

We have been taken for a ride with this in the past .

And distinguish between investment and ownership

Selling UDC finance is a smart move. With the move to electric cars and possible driverless cars, the chinese will be holding a portfolio of rapidly depreciated petrol and diesel cars. Bit like the yellow pages sale really.

NZers need to save and invest more, or assets will fall into overseas hands. Winston should make KiwiSaver compulsory, and step up contributions, funded by tax cuts. The RBNZ won't need to raise the OCR as it will be deflationary, ANZ are selling because they can't get sufficient return on equity as they need to hold too much equity on risky UDC asset classes so selling will increase shareholder value. Buy some ANZ shares if you don't like them making profits. Dividends are great - mine at least don't go offshore.

Good point would be nice to get some capital gain on ANZ shares as well, i hold Aus ANZ shares but they are underwater, dividends have helped keep the total return positive though.

Sale of UDC might give a better return, Morningstar don't think it will make much of a difference though.

Whats in this for NZ, a higher price?
http://www.stuff.co.nz/auckland/local-news/national-news/88991362/Austr…

This reminds me that a year ago Winston Peters was saying the RBNZ should buy Paymark, which is still officially on the block http://www.interest.co.nz/business/79802/winston-peters-wants-rbnz-buy-paymark-big-4-banks-step-towards-taking-back-control

Someone should tell Winston that the Big Short is already a real life story.