The World Gold Council says a rebound is coming, despite speculative net long positions turning negative and money manager positions at a record low
25th Aug 18, 9:02am
by Guest 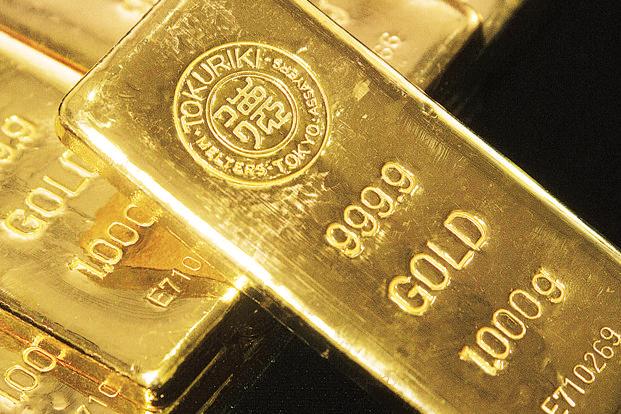 Gold has fallen to a 20-month low amid sharp EM currency depreciation. At these levels, we believe the gold price may bounce back. Consumer demand is likely to be supportive in H2. And short positioning may quickly reverse should one of the many current macroeconomic risks materialise, increasing investment demand.

The gold price lost 3% during the first half of August, a downturn that was exacerbated by gold's fall below US$1,200/oz – an important technical support level – for the first time since early 2017.

Gold was propelled down by the strength of the US dollar (Chart 1) against both developed and emerging market currencies, particularly, a weakening of the Chinese yuan first and Turkish lira later. In fact, the dollar's strength has been one of the most important drivers of gold's performance this year as confrontational trade rhetoric and sanctions has so far played in favour of the US. In addition, both the ECB and BOJ have delayed policy rate hikes, increasing differentials between interest rates in the US.

But gold may rebound due to both technical and fundamental reasons.

Gold speculative positioning in futures markets is increasingly short. CME managed money net long positions stand at a record low since 2006 – when data was first broken down by investor type (Chart 2). Furthermore, net combined speculative positions, which go back further, are negative for the first time since December 2001 (Chart 3). 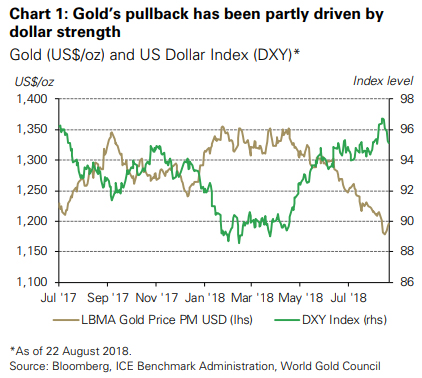 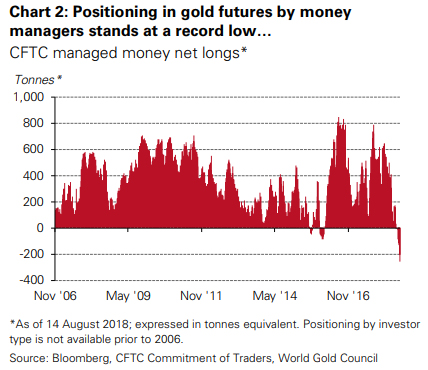 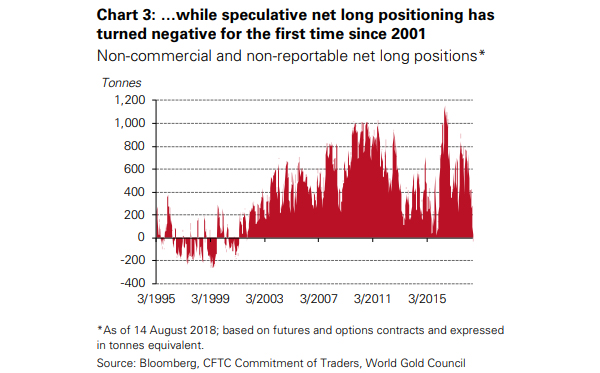 In recent years, a large increase in short positions has been followed by a sharp rally in gold. And while net shorts were more prevalent in previous decades, there have been structural changes that make these positioning levels different and likely short lived. Among them are:

• Economic development in emerging markets (EM), especially China and India, has increased and diversified gold’s consumer and investor base, as the combined share of annual demand of those two markets has doubled over the past 20 years from 25% to 50%

• For almost a decade, the expansion of EM foreign reserves has resulted in net gold demand by central banks – approx. 500 tonnes per year – as a source of return, liquidity and diversification

• Gold production hedging has also changed dramatically, as miners have not only reduced forward sales but also consistently de-hedged their cumulative positions since 2000

• The opportunity cost of holding gold is considerably lower as nominal and real interest rates are approx. 3% below their average level during the 1990s.

But a bounce back in the gold price can only be sustained if there are fundamental reasons to encourage consumers and long-term investors to seek exposure to gold.

Many market participants have questioned why gold has failed to benefit from recent market turmoil. In reality, gold has indeed allowed non-US investors to hedge risks associated with a depreciating currency – for example, the euro, Chinese yuan or Turkish lira to name a few. 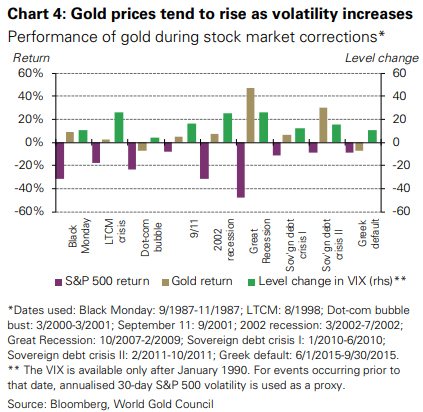 Historically, risks that have been contained within an industry or region – even with an accompanying surge in local gold demand – have not been enough to push the gold price higher in US dollar terms. Yet when these risks become widespread, flight-to-quality flows have resulted in higher dollar gold prices and reduced portfolio losses.

So far market volatility has been relatively low, yet investors remain wary. An example of this can be seen by the increase in flows from equity to bond funds over recent months, as well as the consistent flattening of the bond yield curve in the US. And there are good reasons for that:

• The current US expansion is the second longest in history; it has delivered the longest stock bull market in modern times, pushing valuations to multi-year highs while real rates remain subdued

• So far, effects of trade sanctions have mainly affected emerging markets – such as China or Turkey – but expanding or maintaining sanctions for a longer period will likely damage global growth

• Developed market economies are heating up. Increasingly nationalistic economic policies in many countries, combined with a desire by some governments, if not central banks, to maintain competitive currencies by means of low interest rates, may result in higher inflation

• Although European economies are expanding, risks – ranging from Brexit negotiations to financial institutions’ exposure to emerging market debt – may create a spillover effect that, to date, has been averted.

The past has shown that any of these risks can be the catalyst that elicits strong investment demand.

Chinese demand has proven resilient so far in 2018; the rise in investment demand in Q2 has been linked in part to the depreciation of the yuan, as gold is often used as a currency hedge. This trend has continued into Q3 with increasing volumes in Shanghai and robust inflows in Chinese-listed ETFs over recent weeks.

In India, gold premiums are now positive again, showing a tilt towards buying. And while the monsoon has brought devastating floods to parts in the south India, expectations remain positive for H2 as consumers prepare for their traditional buying period (see additional commentary on India).

Gold market participants have been closely following developments in Turkey – a key market of gold jewellery, investment and central bank demand. Historically, a depreciation in the Turkish lira has resulted in safe-haven flows for gold. Anecdotal evidence so far, however, suggests that currency volatility, high local gold prices, and a call from the government to defend the lira, has kept retail consumers and investors away from the market.

In addition, there have been fears that lower reserve requirements for commercial banks, some of which are linked to gold, would result in further selling pressure. So far, this doesn't seem to have materialised as anecdotal evidence suggest that the Turkish gold premium has started to tighten up.

While risks remain, and while consumer demand may slow should the economy decelerate, contagion from exposure to Turkish debt by developed market banks may also result in more widespread flight-to-quality flows.

A period of heightened geopolitical risk with the potential to impact the global economy could, thus, be supportive of gold even if the dollar were to strengthen.

Gold could trade lower if the US dollar increases its strength, but in the light of positioning in US, and increased interest from buyers in China and India, the risks seem skewed towards a recovery.

As such, we believe that investors can benefit from holding gold as a strategic asset.

Focus 1: The strategic case for gold

Gold is a highly liquid yet scarce asset with no credit risk. It is bought as a luxury good as much as an investment. As such, gold can play four fundamental roles in a portfolio:

• a source of long-term returns

• a diversifier that can mitigate losses in times of market stress

Our analysis shows that, over the past decade, adding 2%, 5% or 10% in gold to the average pension fund portfolio would have increased returns and reduced volatility, resulting in higher risk-adjusted returns (for more information on the methodology, see The relevance of gold as a strategic asset, January 2018).

This article is a re-post from here. The original article also has detailed Notes, and an Appendix of further information.

The gold bugs are in disbelief and it’s been the same old story for the last 50yrs. They keep saying that gold will race to USD5k an ounce and then USD10k an ounce, or whatever number they dream up. The reality is that we will not be going to a gold standard again. Current and future currency is electronic, not gold or silver or platinum. The younger generations are not interested in it and will not be buyers of any significance in the future. It is just another asset class and that’s it.

As a ower of Gold ETFs since 2005, I know I probably would have been better using that money to speculate on houses. It doesn't bother me too much. Those ETFs are easily convertible into cash. The real goldbugs would not own paper gold anyway.

It would not suprise that at some stage in the future, gold and silver outperform. The manipluation of the gold price is really like no other asset class. You might want to take the time to read the following. The idea that central banks manipulate the gold price has been called a conspracy theory. What is more preposterous? Manipulating gold prices or deeting the scene to flood economies with cheap debt to create an illsuion of wealth?

If you had brought gold with NZD (you would be up):

Gold is an insurance policy IMO, so if it doesn't go up - no big deal, but at some point you might be really glad you had some.

'...current and future currency is cryptographic.'

Bitcoin (a deflationary currentcy), yes, as for other crypto-currencies, I'm not so convinced. Also, gold is a commodity, used to preserve perchancing power, IMO.

no gold is the only currency with no liability against it.

Nope, it's long slide to irrelevance continues. Peaked at $800 billion, recently dipped under $200 billion. A crypto that's not under govt control will not be allowed to get big.

In the suburbs of NZ perhaps and in the Anglosphere. Not to Russia and China.

globally.. it may have some fans in the communist strongholds, but overall the value of all cryptos has been sliding. how long before Russia and China crack down on it？

Tell it to BitTorrent.

Gold based Crypto's could be the big new thing. Time will tell...