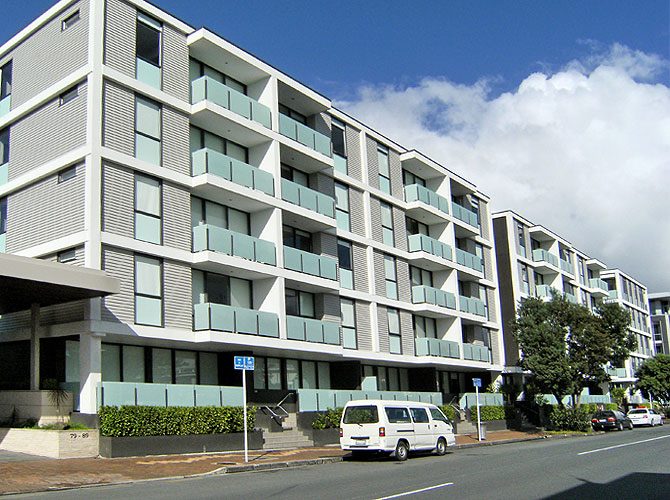 There was plenty to choose from at the latest Auckland apartment auctions and although there were plenty of buyers in attendance, they remained extremely cautious and only around a quarter of the apartments on offer were sold under the hammer with most of those were leasehold.

The City Sales auction got off to a flying start with two apartments in the Lighter Quay complex on Viaduct Harbour headlining the Order of Sale.

The apartments in the Lighter Quay Building are all on leasehold titles. Despite this there were multiple bidders for both units and both sold under the hammer.

However the vendors took a hit on price with both units selling for well under their original purchase prices.

However bidding was more subdued on the remaining 10 units on offer, with only two selling under the hammer and no bids received on five of the others.

The two that sold were a leasehold unit in The Landings Building near the historic former Central Railway Station, and a unit in a complex on Augustus Terrace in Parnell.

Although a sales history wasn't available for the Parnell unit it had a 2017 rating valuation of $730,000.

That brought total sales under the hammer to four with the remaining eight passed in.

Although all attracted bids with two of them attracting multiple bids, all were passed in.

A feature of the current Auckland apartment market is the high number of newly completed apartments coming on to the market.

And even those owners who sell for near their original purchase price are left significantly out of pocket once agency commissions and other costs are deducted.

At the latest apartment auctions three apartments from the newly completed The SugarTree Altro complex in Nelson Street on the fringe of the CBD, and another in the newly completed Union & Co. Building just around the corner, were put under the hammer. All were passed in.

Details of all the properties offered at both the Ray White and City Sales auctions are available on our Residential Auction Results page.

I wonder if the SugarTree apartments were put up for auction by the developer. If so it's a bit of a concern, could be more sign of funding issues affecting the developers of these new blocks.

1) Developers selling unsold units at lower prices due to funding stress.
2) Add to that off the plan buyers who purchased for capital gain who are also looking to sell

Looks like a lot of potential active supply coming onto the market.

Given that vendor asking prices are not being met by potential active buyers, suggests little active demand at current price levels.

If vendors need to sell, then they will have to lower the price that they are willing to accept. There is clearly a buyers market here, despite the reported underlying shortage of housing in Auckland of 40,000 dwellings.

This anecdotal evidence could indicate that the number of sellers experiencing a loss (even before deducting for selling costs and commissions) is increasing. The most recent Pain and Gain report showed roughly 15% of apartment transactions nationwide were sold at a loss.

This was interesting from above:
"A feature of the current Auckland apartment market is the high number of newly completed apartments coming on to the market.

And even those owners who sell for near their original purchase price are left significantly out of pocket once agency commissions and other costs are deducted."

21 out of the 112 residential apartments are unsold (18.75%)
Some have been listed since December 2018 - about 9 months and still unsold.
Wonder how well the developer is capitalised and how long the developer can wait. Will the developer face any funding stress?

2) Here is one being listed for sale by an off the plan buyer:
2/15 Union Street, City Centre, Auckland City, Auckland
"Offshore investor exits Auckland early.
This apartment must be sold before completion.
Our seller is prepared to sell at a loss. "

Another off the plan buyer listing their unit for sale

We will present ALL OFFERS!

Apparently there is a lot of apartment completions due in the next 6 months and with investors bailing and prepared to take a loss, there could be a mass exodus and heaven knows what that will do to prices....

The golden goose is now laying copper eggs, pity those that invested in it..

Too many drawbacks and insufficient control to sort things out when there's a problem.

I picture Apartment buyers sitting down with the solicitor as they sign the documents.

For new off the plan purchases, if they're capital gain oriented, then they pay the deposit up at purchase date, then no further payments until settlement.

Their original exit strategy may have been to sell after settlement and not to rent out or to live in it. Here is a woman who seems to have been capital gain oriented and did just that but got caught out with falling prices and then was unable to secure financing. I wonder how many other off the plan buyers are in a similar situation.

Remember when these developments were sold off the plan, it was a sellers market, property prices were rising rapidly and there was a fear of missing out. With this environment, long term settlement periods (giving sufficient time for potential capital gains), 10% deposits, no further interim cashflow payments by buyers until settlement, off the plan projects are a highly leveraged method for capital gain speculation in real estate.

If it was a buyers market, the apartment developer would be unable to reach the minimum pre-sale level for financing and the project would not have got started - look at all those canceled apartment development projects canceled in the last 2-3 years (for example, the St James development on Queen Street in Auckland)

Wow those apartments really do seem to be a loss making exercise. Couldn't find much details on them apart from Realestate.co.nz saying that the ones on Halsey Street, titled "Foreign Buyer Bailing".