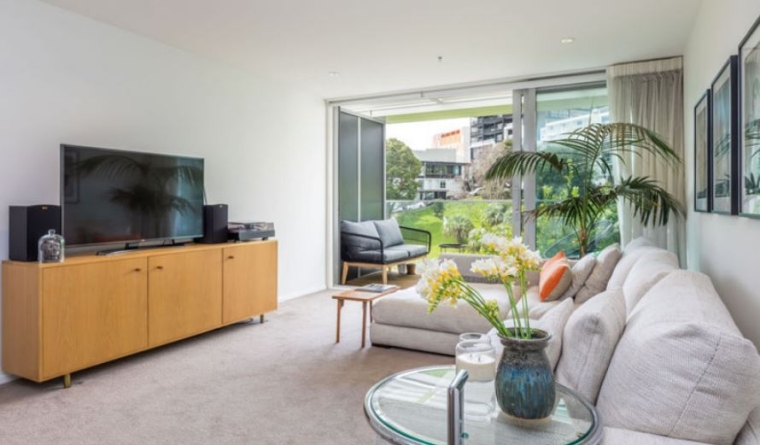 There was a distinctly upbeat mood at this week's main Auckland apartment auction with bidding from investors and owner-occupiers being the strongest we have seen for some time.

The auction at Ray White City Apartments wasn't particularly large with six properties on offer, but a good crowd turned out for it and they weren't window shopping.

First up was a one bedroom apartment in the City Gardens complex on Albert Street in the Central Business District.

This was typical investor fare but the building has remediation issues and the new owners will be required to pay between $84,792 and $113,100 towards the cost of repairs.

However that did not deter some brave souls and there were multiple bidders for the unit, which sold under the hammer for $220,000.

Next up was a two bedroom unit in The Landings complex close to the historic former Central Railway Station building at the bottom of town.

The Landings is a leasehold complex and leasehold units have been selling quite well recently as the market has become more familiar with them. Prices have become far more realistic for these types of properties than they were when most of them were purchased off the plans several years ago.

There were multiple bidders for The Landings unit and it sold under the hammer for $230,000.

There were also a couple of units on offer in the Zest building high up on the Nelson Street ridge.

The Zest is a mainstay for investors and the first of the two to be offered - a two bedroom unit - attracted strong bidding and sold under the hammer for $395,000. A one bedroom unit was passed in with a top bid of $245,500, making it the only unit at the auction that didn't sell under the hammer.

There were also a couple of units that would have appealed to owner-occupiers.

One was a two bedroom, 75 square metre unit with a car park in the Quest on Queen building near Myers Park.

The other owner-occupier unit was a 76 square metre, two bedroom unit with a car park, overlooking Basque Park in Eden Terrace (pictured above).

Bidding on this unit was particularly spirited and it sold under the hammer for $897,000.

Of course one busy auction does not a market make, and whether the strength of the bidding was due to recent interest rate cuts or the improving spring weather or a bit of both, it's too early to say.

But the mood on the day was certainly very positive.

Details and photos of all the properties offered at the auction are available on our Residential Auction Results page.

Lets hope these investors mortgages are with Kiwibank, so a good part of the profit margin circulates locally.

We have been told a lie that foreign investments is go for NZ inc. The reality its a short term sugar fix (for politicians and their vested interests), which results in long term cancer and the ballooning costs of treating this.

Greenfield capital from foreign investors in productivity boosting industries is not the same as foreign banks funding asset transactions.

Our “business-friendly” parties want a lot more of the latter which evidently comes at the expense of the former investment type.

Me thinks that there's still a lot of dodgy overseas money coming in to Auckland just not on the same scale as a few years before 2017. The thing that I find really, really odd. Knowing that wages are generally higher in Wellington than Auckland and that Wellington's property prices are on the rise. Yet according the the auction results on this site, not a single property has been sold at auction since Nov 2017 in Wellington? I wonder why that is? Lack of dodgy money I guess at least in Wellington.

I'm not sure interest reports on Wellington auction sales but auction are also pretty rare in Welly.

Your enthusiasm is beyond parody. Nevertheless I shall endeavour to match: “there were 13 of us on half a landing....”

And in The undergrowth was spotted the lesser spotted investor not seen for years in Auckland. Please sir said the observers, please spare some pennies for the poor developers cos the Chinese have up and left us ....

The market has clearly turned back around. FIVE apartments were sold, all in a single week!

Lacklustre auction activity is not worth much comment these days. It’ll be the overall sales numbers and especially the pipeline of new builds in coming months. We’ll soon find out if the dire shortage is real. If not, expect the market to decline further in Auckland and then beyond. Bottom line is the NZ property market is overvalued and credit is still loose.

Not exactly effusive yourself