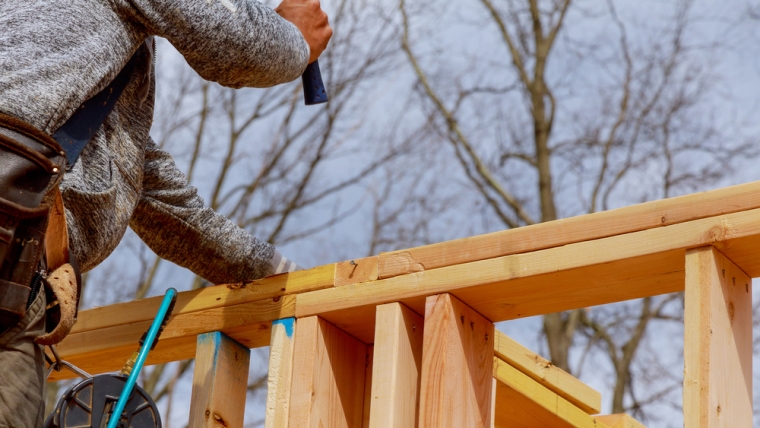 There was a slight dip in the number of new homes consented in April although the numbers remain close to their record highs.

According to Statistics New Zealand, 3994 new homes were consented throughout the country in April, down by 224 (-5.3%) compared to the all time record of 4218 consented in March.

However stand alone houses remain the most popular type of new home by a substantial margin, with 23,547 of them consented in the year to April, followed by 12,876 townhouses and home units, 4237 apartments and 2188 retirement village units.

On an annual basis, the number of new homes consented in the year to April was up compared to the previous 12 months in all North Island regions plus Canterbury and Tasman, but down in all other South Island regions, suggesting the residential building boom is stronger in the North Island and Christchurch than it is in the rest of the South Island.

The total construction value of new residential consents issued in the year to April was $15.842 billion, up 16.3% on the previous 12 months.

On top of that, consents for another $2.083 billion of residential alteration work were issued, up 5.0% on the previous 12 months.

That took the total value of all residential consents issued in the year to April to $17.925 billion, up 14.9% on the previous year.

The interactive charts below show the monthly trend in the number of residential building consents issued in each region, and in the types of dwellings consented each month.

Good. Keep em coming. Poor mother in law just got quoted 450 grand for earthworks so she could build a granny flat at top of her path with a cable car down to the big house. Half a million for earthworks!! Go NZ.

With a cable car!? Might be some pretty serious earthworks there.

No cable car. Just moving the earth. It is a 60 metre path and it also includes landscaping the garden but tbh I just think they don’t want to do it. She struggled to even get a quote, poor thing.

50% engineer and council fees i imagine, maybe even higher.

Obviously with some margin in there for the contractor too.

Historically this is the best April month when it comes to building consents ever.

Consents often do not lead to a sale purchase for 2 years or more.
Over 50% of what is currently OTM for sale as a house or townhouse, in Orewa, Silverdale, Millwater is in fact not built yet or not finished. On RE NZ in general the % is abut 27-33%.
As an indication of where buying and selling part of "market" are right now, I use a moving metric of what the March/April sales are running above the Jan/Feb sales. In 2019 it was running 48% ahead. In 2021 it is only 35% ahead. That is for whole of Auckland. Hence the summer bounce was not what it should have been. this is not greatly surprising since the autumn and winter were utterly unseasonal in sales terms. Reversion to the mean is happening, in sales terms.

For more detail of the bell curve mania that peaked end of December 2020:

March and April sales, although impressive in 2021, were a much lower % better than they ought to have been, if you compare them to Jan-Feb. Each year increases for March, as expected. But in 2019 it increased 48% and in 221 only 35%. The air is coming-out of the balloon inflated by the RB last May. Winter in 2021, we can be assured, is NOT going to match that of 2020. Fewer buyers means less pressure for price rises.

Talked to a builder in one of the areas you mention and he said he was expecting some new sections around September, which should end up in new builds around March-May next year, maybe add an extra month for the resource consent but definitely less than 2years.

No doubt some are built in that time span. But my recorded info from 2017-19 was that a hell of a lot of them sat on RE NZ for a LONG time without selling.
Increasingly, the listings on RE NZ will be made up of these "phantom" houses.

I wonder what the actual starting housing shortage was.
There must be an interesting story and graph, especially the graph ... , you guys could make.

Few believe last year will be representative of next year in terms of immigration and population, both of which have been artificially lowered. Almost certainly you'll see numbers normalise when the border situation is normalised.

The border won't normalise for several years now. COVID cannot be allowed in at this point. Even if everyone is vaccinated due to less than 100% efficacy. This is the path Jacinda chose but can she keep on it as the economy is decimated?

Given the cost of materials I'm surprised how well consents are holding up.