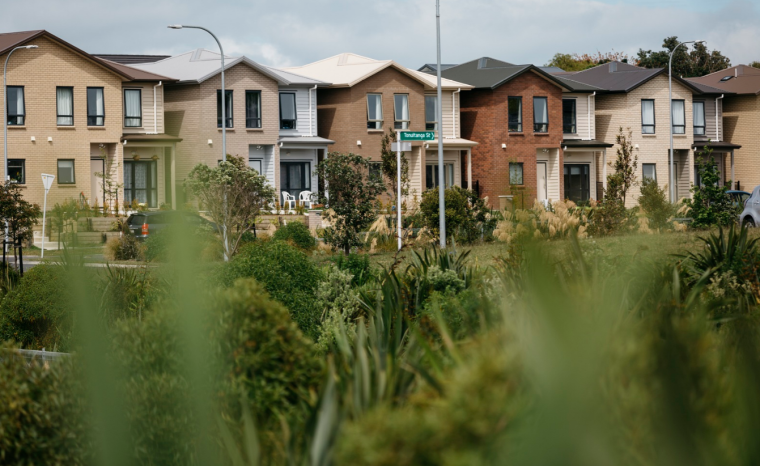 Median prices were also unchanged compared to June in the Bay of Plenty, Manawatu/Whanganui and Southland.

However, prices continued to increase in all other regions in July, with the national median hitting a new record of $826,000 in July, up by $11,000 compared to June.

"The last two months have shown early indications that the rate of growth is starting to ease, however it is too early to say whether this is the usual winter easing we would normally see or if the Government's intervention in the market and signalled changes to the OCR are starting to take effect," REINZ Chief Executive Jen Baird said.

Sales volumes were also lower, with  the REINZ recording 7187 sales throughout the country in July, down by 5.3% compared to June and down by 11.7% compared to July last year.

Note: The REINZ's figures are provisional and may be revised. Is that middle column actually June 2019? The figures look to be closer to the June 2021 data.

Thanks. The table is fixed now.

Typo on the column

Auckland HPI hit a new all time high, increasing 3.3% in a month.

Also, despite the drop in median price, Queenstown Lakes HPI is up 5% in a month and is probably also at an all time high. It's certainly the highest it has been in 1.5 years, which is as far back as I've bothered to check.

Not yet, I sense a summer breeze coming in from the north. Soft landing from autumn / winter 2022.

You could easily be correct.

Opening the borders might well add a further stimulus. (Have just read the Government's proposals.)

Yep the property market has turned into a glider, no engines required anymore to keep it flying, it's just going to ride the Summer thermals up up and away. Brings back memories of me chasing a model glider when I was a kid, it never came down and flew off into the distance never to be seen again.

You do know that that glider is smashed up and scattered along a muddy ditch somewhere right now aye? Probably only 100m from where you last saw it.

Declined? I don't understand. You mean, like, prices are going up less than before?

Declined in three regions. Which part were you having difficulty with?

My comment was a tongue in cheek reference to the attitude that real estate is a sure thing.

Why this narrative is floated every now & then when it's far away from reality, just visit few auctions and you will come to know.
"first signs of cooling" will be snipped away by summer in a week time.

You seem have got Narrative and Data mixed up. The data is in the reports, you are the one pedalling a narrative.

Methinks this is not over yet, with a little more to flog out of the housing horse. Winter cooling? Christchurch is 'undervalued' compared with other centres, so some more FHB pain there to come. Building costs rising, materials going up and up. This will not end well.

Get in while you can!

Residential sales slightly down or flat in July in Auckland compared to July 2020
However TOTAL sales show a different picture:

Shows how last winter was entirely atypical and normal service been resumed.
Notice July 21 total sales below those of July 19

Mike seen recent sales in Rodney? Going crazy, the mania is next level...thought that was over?

Yep, benefitted first hand. Rodney is taking off due to new builds. I see price increases 25k to 50k a month through winter. It ain't stopping for a while longer I suspect.

Take a look at rodney in REINZ report
Sales - 13% cf a year ago.
Not a surprise given 30% price rise

So while my Wellington property went up by (theoretically) $188,200 in 11 months, it's now only up by $164,700 in one year. All donations gratefully accepted. #prayforGeneralComment

These month-to-month comparisons are painful, and only serve to give false hope to those trying to get into the market, although I guess they give the government some great PR fodder - "See! Our changes are having an impact!". It's the trend over time that's doing the damage.

This is an astute observation, the data is probably too noisy to tell whether any months or quarter is statistically meaningful. I'd want to see a multi-year trend reversal to really be sure that housing was on a new trajectory.

Absolutely correct it's nothing more than government PR fodder/narrative building.

We accept Govt has good PR machinery, that's why we didn't hear any noise in media these days & who ever call out the wrong doing, will be blamed as Narrative paddler.

These statistics are produced by the real estate industry body, and published by various media sources. Where on earth are you claiming the Govt PR machine is involved?

And no, I said Pedaling, not Paddling. Though you probably could use one of them too. :)

For a change, I think Stuff did a better job with their headline: "House prices up 25 per cent to hit new record".

neeeiiiiighhhh !!! .....as "crazy" as it sounds, something in those oats tells me, that once the floodgates are open, with expats back to NZ (who can get well paying work and/or run a business here) will keep up the demand for property ....but this will be very much tempered by the younger ones heading for Aussie and other countries ...so who really knows what will happen ???

Well all the boomers can retire in their million dollar homes with their million dollar rentals and receive their superannuation and their rental income, and all of the young people depart to better pastures overseas leaving.....um...hold on....who exactly to pay taxes and debt on housing and COVID recovery?

I can't speak to Europe, but Australia is SMART. Do you really believe Australia will accept the mass immigration of New Zealanders?

I'm sure Aussie recruiters will continue headhunting those with in-vouge-skills, while generically skilled Kiwis wake up to a VERY different reality. Regarding Aussie toughening immigration laws; it's a case of 'slowly-boiling-the-frog-alive'.

If Kiwi's are looking to move, I'd suggest doing it sooner rather than later - avoid becoming Cuisses de grenouille!

There won't be a flood of people coming back.

Totally agree Theoracle .....my post above was a bit "tongue in cheek", as anyone I know working/living overseas isn't coming back, as they are doing very nicely thank you, where they are now....while what will they come back to in Auckland anyway .....a crappy, damp 3 bedder in Mt Roskill for NZD 1.2 mil with a salary 30 -40 % less than they were getting overseas ! ....while I was NOT joking that many of the qualified younger people will be off, as soon as they can ....just look at the medical staff/nurses etc here if they even just moved across to Aussie ...and they are already been recruited.

People still remain obsessed with price rises on here.
Sales mean people bought.
Sales are lower than in July 2020.
If we have more stock (as we do) and much lower rates (also so) and sales fall, that tells you they are too dear.
Not difficult really.
Stock is lowest on record OTM.
This is secular decline since 2007 and is due to ageing pop and disinclination to move for older folk
Again, this is v rarely remarked upon
House ownership is in secular decline and will not recover