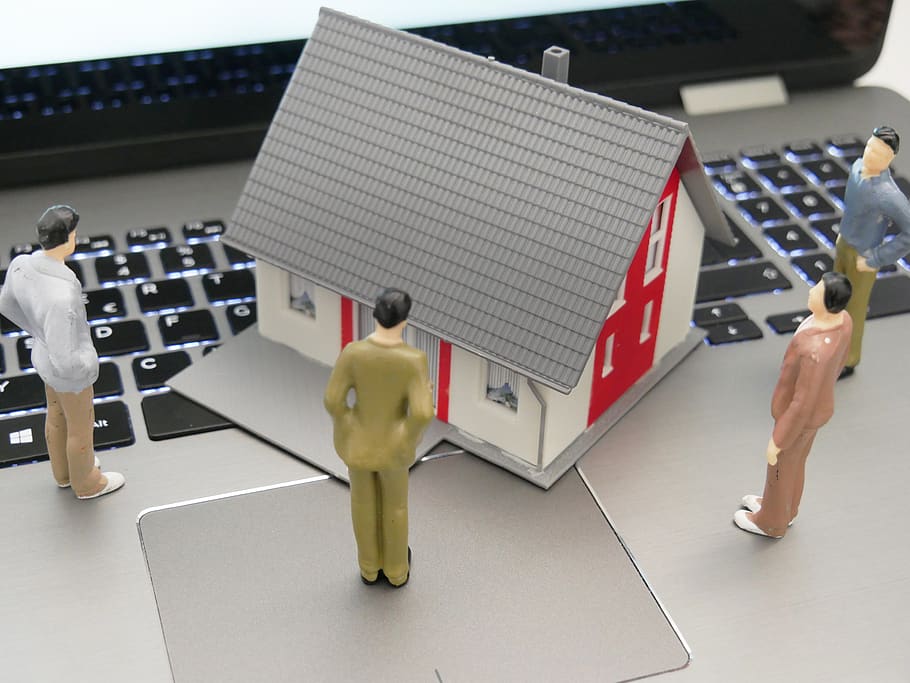 The full effects of the latest lockdowns on residential real estate activity are becoming apparent, with Auckland taking a much bigger hit than the rest of New Zealand.

Property website Realestate.co.nz received 7035 new listings in September, up 8.2% compared to August but down 30% compared to September last year.

That suggests marketing activity started to pick up in September after dropping off sharply in August, when the entire country was in level 4 lockdown for the second half of the month.

However the Auckland market has not fared so well, with new listings from the country's biggest real estate market declining from 3155 in July, to 2590 in August and 1709 in September.

That was the lowest number of new Auckland listings received by Realestate.co.nz for any month of the year since December 2019, and was down 57.9% compared to September last year.

That almost certainly reflects the fact Auckland spent September under level 3 or 4 restrictions, while the rest of NZ has been in the less restrictive level 2 for much of that time.

September's average asking price was the lowest it has been since May this year.

However at the regional level, 12 of Realestate.co.nz's sales districts posted gains in their average asking prices in September compared to August and just seven posted declines.

The fact new listings around most of NZ apart from Auckland are already picking up, suggests the market will recover quickly once restrictions are eased, particularly as it will be heading into the spring/summer selling season. 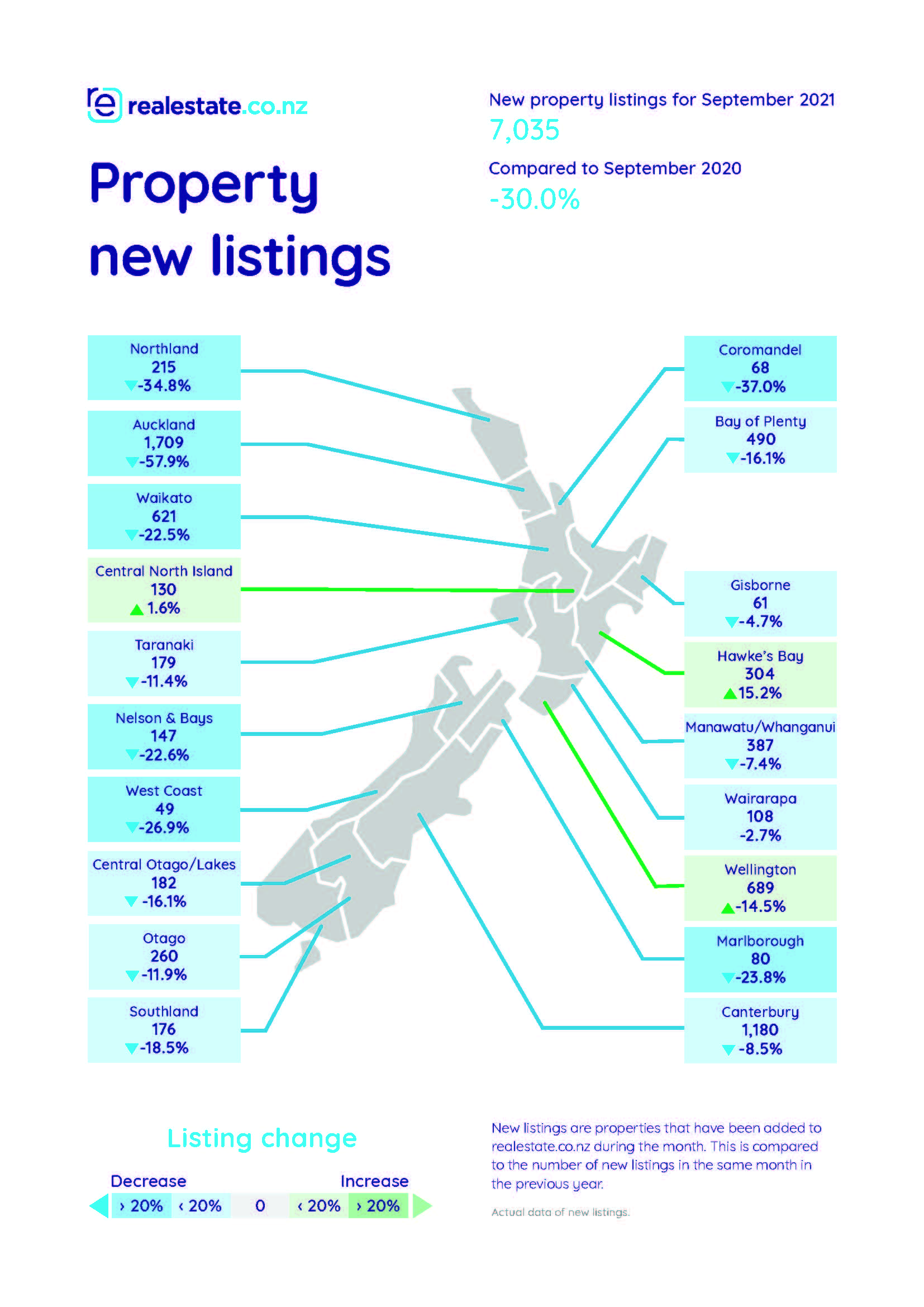 Auckland probably needs the border to reopen early next year to get the housing market going again. It's just in a holding pattern presently because supply and demand are close to balanced.

Treading water. Well documented traditional winter slow down as well. Prices are more significant than volume. Would guess when everything comes out of the holding pattern, business as usual, upwards and onwards because nothing much to date has presented much of an obstacle to that.

You write: "It's just in a holding pattern presently because supply and demand are close to balanced."

Supply and demand are not balanced in Auckland - because house prices are rising at a hair-raising rate.

It's but a prelude to the main event next year.

What causes house prices to rise rapidly year in year?

Or banks creating unlimited amounts of credit for financial transaction?

Or a bit of both? Or something else?

Why would you list your property in level 4 when there can be no viewings and no certainty when they'll be allowed...?

Since dropping to level 3, the Auckland market has been going crazy. Properties selling within days.

I understand FHB can use an existing bank pre-approval to buy at under 20% deposit until 1 November 2021. So they will be desperate to buy before 1 November. After that they will be shut out of the market until they manage to save 20% deposit. I think the housing market could be quite different after 1 November.

Asking price lower. Is that because the average was dragged down by fewer AK properties, or….

would not read anything into the ave asking price dropping --  with a 57% drop in Auckland listings --  bound to have screwed the average downward --  185000 visa holders just offered residency - correctly -- but many of those now have the security to actually buy their own home -- so expect another surge in demand and then more relaxed MIQ --   will bring thousands more back before the jan feb surge !

Auckland house price rise by $74000 during recent lockdown - is this a sign that Auckland housing market has taken a hit ???

And people on here say I'm in fictionville when I say how much I've made from my investment properties.

Your in fictionville with the dollars your quoting in the timeframes given in a suburb for some reason you cannot disclose.

Why? I don't need to provide evidence to you. Nor do I want someone like you benefitting.

You just can't hack that people are making big dollars in Auckland.

You think I'm making sh*t up? Haha you keep thinking that. I'm quite happy with my bank balance thanks.

Hope you pay tax on your capital gains

More than happy to. The more tax I pay = more profits.

At the rate of the gains honestly they can tax me 50% all up rate and I'd would still be winning.

Pilot to co-pilot : "can you see the runway?"

I can, and there's a lot of money bags to be picked up!

Its obscene but maybe theres a reason it escalated. I had a building go from 475k to 1.7m over 2 years but I invested a further 500k into it

165000 people plus their partners and dependent children to be accrurate.

This headline couldn't be further from the truth.

Listings are down, as expected in level 4. But prices are continuing to rise especially for off the plan and new builds.

Demand to buy is massive now according to my local agents.

Yes as I said yesterday. All the stuff on my watch list is pre auction offer and auction brought forward. All disappearing from the watch list.

Some of the prices are still jaw dropping even from the levels we have become used to. I think there could be another 10% in it this summer.

Listings down. prices up - go figure?!

There is a new tv reality program being promoted and hosted by none other than the PMs own partner.. home sweet home is what its called, so with the PM pushing house prices and now CG (clarke of course which is a nice coincidence) getting behind the housing ponzi, is there anybody who truly genuinely thinks that nz houses will lose value.

"Hammered" - what a silly and sensationalist headline.

Can't wait to see what you're saying when prices are actually falling, and by a meaningful amount.

" Going down like the titanic. Extreme panic and questions of how we will survive after house price drops of 5% in month of ***..."