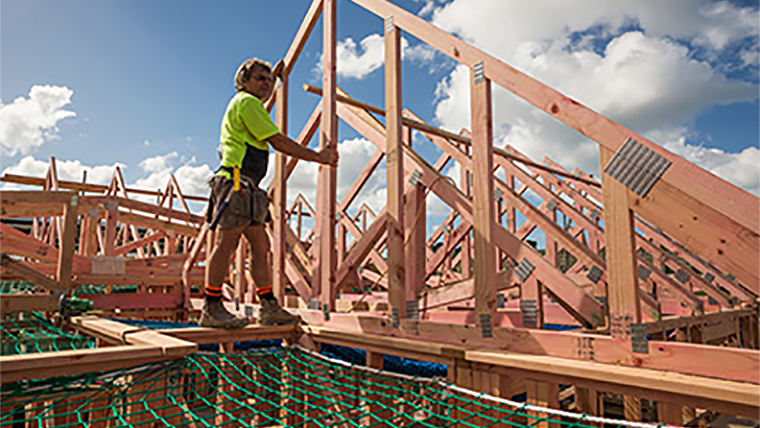 Developers are showing no lack of enthusiasm for housing with a record 51,015 new dwellings consented in the 12 months to the end of May, according to Statistics New Zealand.

Stand-alone houses remain the most popular type of new home being built, with 24,536 consented in the year to May, followed by 19,656 townhouses and home units, 4037 apartments and 2786 retirement village units.

However townhouses and home units provided most of the growth in dwelling consents, with their numbers up by 47.7% in the year to May while growth in stand-alone houses was almost flat at 2.1% for the year.

Hurray, can we now lay to rest, the irrefutable fact that there is a shortage of houses.

Those claiming all this was simply a supply side problem don't want to see the obvious - construction supply took years to ramp up after those in the industry got badly burnt in 2008 but demand was fueled by simply policy tweaks around aggressive rate cuts, money printing and visa stamping.

For example, it took 30 years of cribbing for the Labour party to finally reintroduced apprenticeship support for building and construction trades.

You do realise consent doesn't = new dwelling. So many of these consents will never see the light of day, construction firms will go under and banks pulling funding.

The housing shortage will get worse, not better. Do not kid yourself that renters are in for halcyon days, they're not.

It's always been this way, it's not a new thing.  You do have some merit in the potential for construction firms to go bust and a credit crunch, but look around at the data it's all trending towards a housing surplus.

Of course not, but in this market far fewer will be constructed than on average.

Yes. In boom times quite a large proportion of consented dwellings get built. This proportion is likely to become much smaller over the next two years.

I wonder if this will dampen the rate of the eventual recovery, people put consented builds on hold while the market is tanking and at the beginning of the next bullrun start building.

Yep quite possible, and I know a couple of developers who know things are stuffed for at least the next couple of years but are looking to the next bull run circa 2024 onwards

Not sure how many of these will get built......

Yep. It's an adjustment (overshoot) phase. Lots of new densely packed houses with almost no section which are not selling at their elevated prices. There will be lots of developers right now doing calculations on how low they can sell for and still hopefully make a (tiny) profit.

A developer down the road sold out just prior to things halting. First thing they did was to buy a new Aston Martin SUV! Nice brand but bad taste model in my view. Purely for show.

there will be a gib oversupply in a few months...

Deploying borrowed capital and consuming expensive energy to create an asset that is declining in value. NZ's equivalent to Bitcoin  mining.

There will always be future demand from migrants looking to move to NZ. The population ponzi is meant to continue into oblivion: NZ continues to offer easy an pathway to permanency as well as a backdoor entry into bigger, better economies. All 4 parties in Parliament are practically in favour of low-skilled migration.

No other reason a developer would squeeze together multiple 65m2 2-bdr townhouses on a small piece of land in the leafy suburb of Wainuiomata.

Those people arrive with no money and usually a substantial debt to whoever facilitated their visa. Their only option is to rent. If not enough houses exist then someone needs to be prepared to outlay a grand a week in interest, rates and insurance in exchange for $800 (if their lucky) in rent. It works when interest rates a falling constantly for 10 years and property values are rising. But when the economy finds reverse gear its a different story.

Living and raising a family in an overpriced house isn't easy either. Especially with mortgage rates increasing.

What happens, if someone, who do not have deep pockets to hold and /or unable to sell that was expected during housing boom.........lot of unanswered question, will only know with time.

Ready for a wave of fully consented development sites?

Everywhere is under resourced and under pressure. What will give first. Who is meant to build all this stuff and with what?

I think every consent issued now ( for the 2nd 1/4 2022) has baked into it a 25% chance either the developer, builder or client will go bust. Heck even the suppliers are at risk.

Rising interest rates stuff your borrowing and payment power, rising available property inventories stuff your sales and or lease/renting opportunities, supply chain stuffs delivery, budgets & timeframes, labor shortages stuff delivery, consultants & local councils doing their best but not up to the task with quality control, documents getting stamped that don't really stand up to any scrutiny. What a mess.

Hopefully they get built and support the building industry. The worst thing to have now would be a construction crash just when housing is starting to get beaten down. I want a house price KO.

Let's hope Kainga Ora and Kiwibuild are ready to hire builders as companies fall over. They need to absorb them and have them working on more supply.

Nice in theory but….

Once builders are stuffed in the private sector it’s probably game over.

and those who aren’t stuffed and are doing well (until they aren’t) will prefer private sector work.

the other thing is while it looks like KO are building a lot, they don’t have a huge number of new projects commencing every few months. Their design and procurement processes are painful.

And builders have gone bust building for KO.

They have been KO'd, which is the public version of being 'Fletchered.'

some builders I know kept on building in the last downturn even when the development was just breaking even. At least the crew were still drawing a wage for their work.

This will happen again for those who are in the position to do so, just to keep things moving.

The price of land is likely to take quite a hammering though.

Should never have let Treasury put the knife into the Ministry of Works, eh, in retrospect.

A builder is often simply a company structure that encompasses some varied levels of experience, all of whom could be hired. The project pipeline is probably the bigger issue unless they move quickly and buy up land and put templated builds on.

also agree re ‘template’ designs. KO are far too bespoke. I get that they want decent quality, but if you have decent quality standardised plans then what’s the problem.

A big Kainga Ora development currently being tendered for 2000 homes in Porirua.

cheers (as I down wine number 3)

If you want a housing KO, what you will get is a great depression, bankrupt banks and mass unemployment. You are unlikely to benefit from that.

Unfortunately, our central bankers, who have initially created the housing bubble with 0.25% interest rates, seem to be on your side, with interest rates almost ten times higher now.

A big congrats for the linked Residential building analysts tables. They are very telling. Thank you Interest

Interesting to see that the average consented size is consistently falling across all categories. And not just a mix with more townhouses in, stand alone houses have fallen consistently over the last 12 years.

This highlights everything that is wrong with NZ housing, ie the way our Politicians think.

It use to take approx 5 to 6 months from thinking about building a house to moving into it. Basically, supply could equal demand in developer real-time. And you didn't have to see that far into the future to see the trend so they could pull back just as quickly as they could ramp up.

Now it takes years so the demand and supply cycles are completely out of sync, so just as demand drops, then potential supply comes on stream and vis versa.

We are being told there are now more houses for sale, houses for rent and new builds than the market needs (or can afford?). So house prices and rents are plummeting.

I guess the builders will now go bankrupt , landlords dump their houses, consented houses wont be built, tradies move overseas or whatever then in 4 years as we start to come right again we have another shortage of houses and need to find builders and tradies again... and they will all be gone so we wont be able build quick enough to catch up again, then we will get told there is a shortage and house will prices start to rise again (and somehow we will forget last time and the economic boom-bust cycle will continue).

Blast from the past!

Inflation,if it runs at a cumulative 30%, for instance,from 2020 to 2025, and nominal House prices fall 25 %, ( an Auckland central ordinary home,going from 1.5 million to 1.125 million) ,then that ending 1.125 million price is worth $787500 in 2020 money. And that's what happens in an ordinary slump. But exacerbated this time by the additional bump the peak got pushed ,through Covid period loose monetary  policy. Usually  for example ,we might see a 4 year slump,with 10% fall back in nominal price ,and an underlying 3% housing inflation annually,but not being expressed until the upswing, so we catch 10 years of 3%+ housing inflation,and the 10% drop reinstated, and those two factors alone,account for the majority of the upswing on the next cycle. This time ,the same,but increased magnitude of swing ,as the pendulum got an extra shunt on its upswing with LVR removal and 2% mortgages.

Inflation must be reckoned in, not just nominal " Headline" price of the assett.