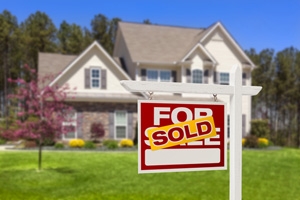 "In April and May they edged down, and while they recovered some lost ground in June and again in July, prices have certainly not returned to those being achieved in March."

A feature of the market was the number of high end properties being sold.

"A stand out feature of July's trading was that we sold 169 homes for in excess of $1 million, which represents nearly one house in every six sold," Thompson said.

"Sales of homes in this price segment are currently running 28.7% ahead of where they were last year," he said.

The agency reported that a shortage of new listings was once again becoming a feature of the market.

Thompson said the agency had 3,273 properties listed for sale at the end of July, the lowest number for seven months, with 1,396 new listings during July.

"We normally see new listings increase during August as vendors prepare to take advantage of the increase in sales activity as spring approaches.

"However, with a general election in September, the potential exists that trading in August may not follow the normal pattern as the market awaits the election outcome," he said.

"The supply of new listings to market continued to fall, but the paucity of sales was such that the availability of stock on the market rose slightly," Stephens said.

"There are now 3.6 months' worth of sales available on the market. This is low by historical standard, but is higher than a year ago, when there were just 2.7 months' supply on the market.

"This data points towards a steadily sagging Auckland housing market, contradicting evidence of a modest recovery we had detected elsewhere."

anyway, with this news watch John Key and his cronies try and influence the RB to hold or reduce interest rates, as they have to keep this AKL partaay a rockin' ...... !!

doublegz you are dreaming. Property prices in Auckland will continue to drive up once we are past the election. The whole country has slowed down especially retail as people do not want to committ themselves when times are uncertain. Once National are voted back into power in September things will improve again. Briscoes might be attaining record profits but companies like Noel Leeming and Harvey Norman who sell big ticket items are experiencing slow times.

...ah gordon maybe retai has slowed as all the cash is going into mortgages, rates, cost of living.  If you think things will come 'right' after the elections good luck.  I see the dollar dropping, gas increasing so even less cash around. Pray tell where the wanna be home buyer is going to find any, let alone more cash, to fund that home?

Rastus are you smoking that terrible green stuff again ?

Or are you just crystal balling the future through a haze of smelly Ganja smoke or green tinted glasses ?

If Labour get in we are in seriuos trouble all round , and your predictions may come true .

And forget about Kiwis buying homes , we are no longer a factor in that equation any more , its all about Mandarin and Cantonese speaking agents doing the  selling to buyers who have access to 2% -3% funding in Hong Kong and Shanghai .

Its bloody unfair , and not the Kiwi way of doing things

Id say we are in trouble which either side gets in. Dairy dropping is a big concern and aussie slowing.

The only thing priming this economy is the chch rebuild but even that is peaking at present.

The USA cant and wont, energy costs too much these days.

Maybe a plan B is an idea.

As if national are any better.

"over-taken" yes indeed welcome to the right wing version of how globaliastiaon works for the 1%.

What with the freezing weather, wild winds, short dark days, LVR nonsense, higher interest rates plus the election wobbles, it's a wonder that anything is selling let alone being listed.

All booms have "breathers" and this is just one of them.

Just wait for spring, post elections and longer days and then stand back.

It ain't over yet.

Bollard has been replaced btw, not that there is much change.

I hope you can hold your breath for a long time Big Olly...prices peaked a while back, and rents will be easing as plenty of choice at the moment.

The way Auckland is going right now, you all will need to take a second mortgage out just to pay the Council rates and to keep Len's loopy train humming along.

"A feature of the market was the number of high end properties being sold."

...more likely the clever boys cashing in ahead of the masses I'd say.

Yep, which is what I meant...I wonder if it will become a rout if Labour wins....

When you're hearing adverts on the radio by some spruikers , pushing their " get-rich-quick-in-property " seminars , then you know that the " fat lady " is already warming up her vocal chords .