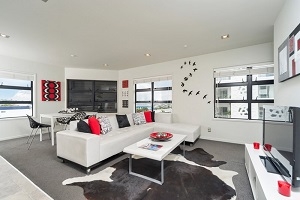 Residential property prices in Auckland have risen so much that commercial properties can be a viable alternative for mum and dad investors.

The latest sales results from commercial real estate agency Knight Frank include a warehouse/office building in Mt Wellington that sold for $730,000, and a ground floor office in Penrose that sold for $830,000 (see results below).

Those prices are comparable to average residential property prices in many parts of Auckland and are even within striking distance of better quality apartments in the city.

At this week's Ray White City Apartments auction, a two bedroom apartment in Grey Lynn (pictured) was passed in with a highest bid of $680,000, with the owner holding out for $700,000 (see results below).

Those prices are putting commercial properties within reach of investors who would otherwise be considering residential investments.

Commercial properties have the advantage of generally offering higher rental yields than residential, and in most commercial leases the tenant pays outgoings such as rates, insurance and often some maintenance costs, which boosts investor returns even further.

However it can take longer to find tenants for commercial properties, which means vacancy periods can be longer than for residential.

By comparison, commercial properties can provide yields in the 7-8% region and sometimes more, providing double the return of residential properties.

I think 'besties' use this synergistic marketing strategy of contrast and overflow, as an explanation for why hotter singles always have an uglier mate to hang around the watering holes with (it doesn't matter how hot or not the hotter one is).