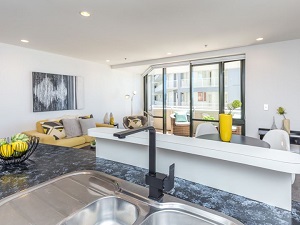 This apartment in The Beresford building sold for $480,000.

It was a warm, humid day for Ray White City Apartments' latest auction but there was nothing languid about the bidding.

With 14 apartments on offer there was plenty to choose from and most apartments attracted multiple bids some of which was very spirited.

By the end of the auction 12 had sold under the hammer and just two were left for sale by negotiation.

See below for the full results:

Chinese buy 1/3 of homes in Vancouver.

Also when is Interest.co.nz going to get rid of the failed flag contender?

Can you please stop attacking the Chinese day in day out...I'm sure we are all tired of it! Just stop stirring shit.

So you are advocating censorship? Instead of reporting what is going on?

DGZ - it's only the corrupt who are uncomfortable with the truth.

Corrupt or not just don't single out any particular race. The buyers might have Chinese sounding names but they could be from the USA or Devon. Please do not assume.

The truth shall set you free..... As they say "sunlight is the best disinfectant"

These results are quite striking. It's a pity I am unable at this time to do my CV analysis but the ratio looks high and although it is a small sample it would appear the race is on again.

Regarding the Chinese I think it is okay to comment as the relatively sudden emergence of the Chinese buyer is an unprecedented phenomenon and must have an impact on the housing market. Almost over night there are over 100 million middle class Chinese on the world scene, more than the US has. The Chinese also have a modus operandi of emigrating and involving themselves in business in their new countries. Long ago a few hardy Chinese were forced to pay something like 20 years salary just to be able to stay in New Zealand so they are willing to go to extremes.

The good news is that they tend to be a positive influence so it could be worse. A number of cities in America which are nicely affluent as well as the safest to live in have a 60/40 European/Asian mix (Irvine, Sunnyvale, Bellevue). These cities over the last 30 years have increased their Asian percentage from about 10% to 40%. Someone wanting to make money in property would be wise to consider the impact this group has on things.

DGZ. Scared of losing commissions on those sales to chinese ?

Yeah yeah yeah, if you think you are very clever you are WRONG!!

If you lived in a crap country heavy pollution, over populated, bad hygiene etc and you had a bit of coin wouldn't you look for somewhere better to live ie NZ. I know I would.