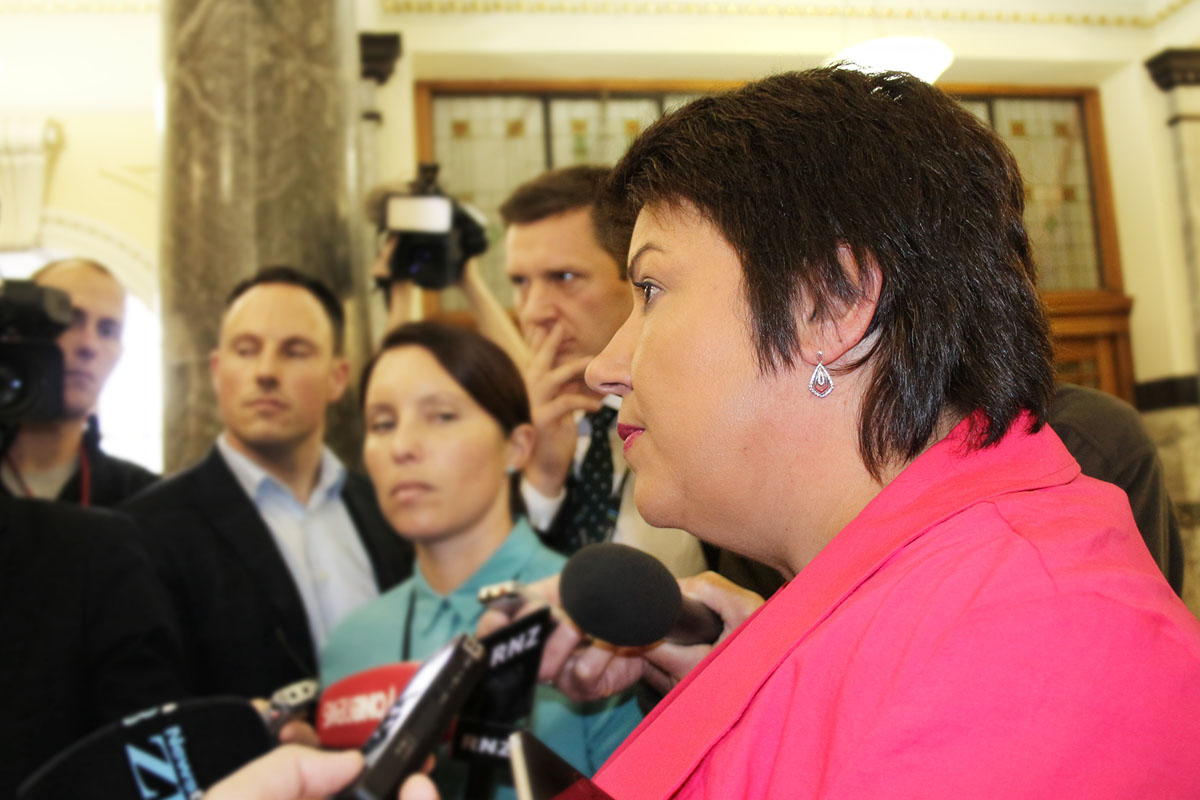 Social Housing Minister Paula Bennett talking to reporters in Parliament on May 25, 2016. Photo by Lynn Grieveson for Hive News.

In another blow for the Government's social housing reform programme, the PACT Group has pulled out of plans to buy and manage 348 Housing New Zealand Corp (HNZ) homes in Invercargill, having already been selected as the sole bidder.

Housing NZ Minister Bill English and Social Housing Minister Paula Bennett announced the withdrawal today, saying they remained committed to selling 1,000-2,000 state houses as part of its social housing reform programme, which is aimed at shifting state houses to community providers and other funders, who then receive housing subsidies from the Government.

"The PACT group has decided to withdraw from the process to buy and manage 348 Housing New Zealand (HNZ) houses in Invercargill after the group decided the transaction wasn't the best opportunity for them to achieve their aspiration of providing services to the community," Bennett and English said in the statement.

"PACT was the only party invited to submit a proposal for the Invercargill transaction so we have put this procurement process on hold until we can assess other options," English said.

"While I am disappointed that PACT is no longer participating in the Invercargill transaction, their decision should reassure social housing tenants that the process is robust and that interested parties have enough information to make the best decision for themselves and the tenants," Bennett said.

Meanwhile, they announced the Government was considering a proposal by the Horowhenua District Council to explore a joint 'transfer' of council flats and HNZ properties to a community housing provider.

"The council has proposed to 'package' its 115 pensioner units with 250 HNZ properties and tenancies in Foxton, Levin and Shannon," English said.

English said the Government would consult with local iwi before any decision, with the process running to July 1.

"If those discussions are positive, we would then look to outline a joint commercial process with the council," he said.

Social Housing Minister Paula Bennett said any potential transaction within the Social Housing Reform Programme must put the needs of the tenants first.

"The procurement process for the 1,134 properties and tenancies in Tauranga is still underway and progressing well. These transfers are only one part of the overall social housing reform programme. As we look at options such as the opportunity in Horowhenua, we will always put the tenants and their needs first," she said.

“It is time for the Government to back away from its misguided quest to sell off billions of dollars of land and housing desperately needed for vulnerable Kiwis in the middle of a housing crisis," Twyford said.

“It is grotesque to be flogging off state houses to overseas companies when Kiwi families are living in cars and garages. On top of that, the Government’s sales process has driven out local community housing groups, leaving the field open to merchant bankers and offshore companies," he said.

“That is exactly what has happened in Tauranga where the Wairarapa-based Trust House – one of the biggest community-based housing landlords – recently pulled out of the process. Community housing providers are saying the Government’s sales process is bureaucratic, risky and expensive, with them having to fork out up to a million dollars just to be in the process which is completely unsuitable for local community organisations," he said.

“It makes a mockery of the Government’s spin that the state sell off was all about helping build up local Kiwi community housing providers. After the Salvation Army and Methodist Mission ruled themselves out of the sales process, it became very clear this whole exercise has nothing at all to do with getting community housing groups to take on this work. This is an omni-shambles. It is a bad policy. It has been implemented incompetently. It is time to go back to the drawing board.”

“This risk now is that Bill English is going to want to sell these houses off at bargain-basement prices, for far less than they’re worth, just to make his sell-off scheme look like a ‘success’. Bill English needs to take the hint and take the state houses off the market," Davidson said.

“Let’s not forget that this announcement comes just one day after a Budget that won’t build one extra state house. New Zealanders do not want our state houses to be sold off while we’ve got people living in cars and garages, and while there’s 4,500 people on the waiting list for a home," she said.

“The state house sale is a disaster for current state-houses tenants and the 4,500 people on the waiting list, and it’s clearly turned into a disaster for the Government as well,” said Ms Davidson.

This government has no mandate from the citizens of New Zealand, to dispose of state housing.
It is such a critical issue that it needs to be put to referendum. It is an irreversible degradation of the social provision for the poor and needy,and contrary to the social contract,that defines our country.
A decision must be put to the people.

We let that A-hole waste 25 mill over a flag jimmy so I don't think we will be doing it again anytime soon. We unfortunately are being pushed into a corner that will require some more than serious fightback leading up to election time.

Its disappointing that Interest.co.nz has fallen from a financial information site to a lefty blog.
stories that rate here are now either about Dairy farming's demise , Auckland house prices... or anything anti Government.
comments like the one above from Justice are all too common..more suitable to the likes of the standard.
shame.

The financial, economic, social damage by this current 'government' transcends political left/right categorisation.
Financially, the National Govt have stopped the potential financial/housing success of the children of the readers of this site.
Economically, this Govt are placing a sinking lid on all of the social services - hospitals, schools, universities, police, etc - that is an issue that concerns right-wing, pro- business conservatives as much as the left.
National are no longer the party for SME owners, farmers, provincial dwellers - they are the party for the global elite.
National are wrecking Auckland with immigration, and foreign property owners, all to artificially boost GDP and property prices with no thought for NZ as a society.
From an economic and financial point of view they are on the way out - that is obvious, their financial and economic non-management is all coming home to roost, hence the articles and comments.

Most of your missive is rubbish.
Stats on health /education policing improving.(not perfect but better)
you say national is on the "way out".
please tell me a better alternative to the present mob

This is the kind of mindless tribalism that's letting corruption thrive. When you'll excuse any amoral, damaging, self-serving borderline criminal behaviour when it's coming from your 'team', instead of facing up to it, you're the problem.

Yes its a shame Don - it didn't used to be that way quite so much, and I'm sure that the site owners don't want it to be that way, but it certainly. Its the reason that I, and I note a number of sensible others, have stopped contributing to many of the threads, in fact rarely read them now days - of course that just makes the problem even more pronounced, with the remaining contributors all emboldened in that they know it all, and that everyone else agrees with them .

Did you run away from home, but nobody noticed, so you came back to whine? Don't be pathetic. If you disagree speak up, but to not comment then creep around with passive-aggressive bleats that the comments aren't to your taste is just cry-babying.

With gems like this I can see why he bailed.

Not Surprising that John Key is selling NZ to his overseas friends in the name of development. A time will come when NZ will be ruled by Asians. Process has started - give one more term to John Key n Asians will be the ruler as it is the way propert price is going up, which Kiwi will be able to afford to sray in major cities of NZ. HOW ABOUT CHANGING NZ NAME TO CHINALAND AND OUR HON PM WILL BE THE KING OF CHINALAND."

It might be a ' blog' site if I wrote the article Don. But it's just a comment/observation with as much weight as yours. As for the 'lefty' claim, I somehow doubt the wallpaper background of this site would still be blue and that loser flag still visible if true.

Crikey JummH - are you trying to tell us that they have a mandate to tax people and build houses in the first place?? ......Whatever happened to everyone's constitutional rights? The social contracts that define our country were buggered long ago.

Sad to say, but come election time this will be forgotten. Most people won't be impacted by it and by then Key will be waving tax cuts in your face t distract you once again.

No. It won't. There's some major anger building. I think their election campaign might need to be via Skype.