Property
How many Big Macs could you buy for the equivalent cost of a median priced Auckland house compared to Melbourne, Sydney and New York? 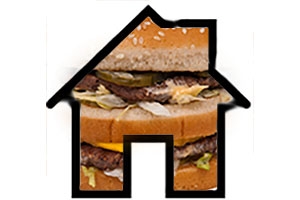 How many Big Macs would it take to pay for an average house in Auckland?

And assuming you could find a vendor willing to accept payment in the iconic burgers, how would Auckland's Big Mac buying power compare with other places such as Sydney, Melbourne or New York?

These questions were recently pondered by the technical boffins at local property valuation website Homes.co.nz as they updated the valuations for 1.4 million New Zealand homes that are freely available on their website.

Borrowing a leaf from the pages of the famous Big Mac Index developed by The Economist magazine to measure whether currencies in different countries are over or under-valued depending on their Big Mac purchasing power, Homes.co.nz developed its own Big Mac Property Index.

According to the website, the median value of homes in Auckland was $875,056 at the beginning of this month.

So how would that compare with Melbourne, Sydney or New York?

According to Homes.co.nz. you would need considerably fewer Big Macs to buy median priced homes in either Melbourne or New York, and slightly less to buy a median priced home in Sydney (after converting local Big Mac and median prices to New Zealand dollars).

Although it's a light hearted comparison, it does highlight a serious issue and suggests Auckland housing is seriously more expensive than other cities around the world.

"While this is a quasi-metric, it gives a little context to comparing other cities around the world," Homes.co.nz marketing manager Jeremy O'Hanlon said.

"It's hard to believe that we've created a more expensive city than a global centre like New York.

"I'm not sure if there's any comfort in Auckland being just slightly worse off than Sydney, they have significant problems of their own," he said.

Had a Big Mac the other day.
Tasted way better than a damp, soggy Auckland home..

... so , are you saying that Auckland's house prices are morbidly obese on the Big Mac index ?

PTI (price-to-income) is the new BMI

PTI should be used more often, it gives a much better perspective to things.

I remember back in the OE days, the easiest way to compare prices was:
A Kilo of Apples
A big Mac Meal
a Standard beer.
Convert the price to NZ$ and you had an excellent gauge on relative costs.

Switzerland was truly expensive on all fronts. Maybe John Key is right, we are becoming the Swiss South Pacific.

Don't know about the costs of the big macs used in comparison.
But would be interested to know what is the proportion / percentage of the local minimum wage required to purchase one big mac in different countries that have been used for this comparison.

Nice idea. Rather than convert to $NZ house price and NZ Big Mac price, might it be a better comparison to leave prices in local equivalent? Thus, $NZ for median AKL house divided by the price of a Big Mac from Queen Street Maccas. Ditto, NYC median price divided by the local NYC Big Mac price. No currency issues then, as the currency comparator truly is purely the Big Mac.

That is how the Big Mac index got described to me Ron. I don't understand why conversion is necessary, it was developed to avoid that trap. the query about tieing the price the the local median income would be more relevant too.

I hear Australian big macs cost $4.95 AUD. which would imply more big macs purchased in Australia if you don't first convert to NZD and buy NZ big macs. Difference is about 17%.

That's my understanding too murray86, but with merely a degree in economics and never an actual economist, was loath to lay claim to any specialist knowedge I lacked, so thanks for that. Still, great idea, and if the currency variance is in the order of 17% or more as suggested here, it would be interesting to see the results of a currency neutral model, if the good people at Homes choose to re-run the analysis.

So if the housing is out of kilter with a Macdonalds Big Mac takeaway , how does it measure up to a Noodle Canteen Pork Chow Mein takeaway ?

don"t know if big macs are same overseas. Ours seem to have shrunk in last few years. more like little mac now. Probably because we can"t afford the full big mac 'cause of housing costs here

MacDonald is the 2nd biggest property owner worldwide, any guesses who is the biggest ?

Wonder if they have a MacDonalds franchise in the Vatican City ?

I doubt that very much - the NZ state alone would own far more if you include state highways, parks, housing, offices etc. In addition, the Catholic Church is actually hundreds of inter-related parties/entities with different ownership. Your local parish is owned by the local parish and not by Pope Francis.

If we exclude governments/states (which includes the Vatican City) then I don't know.

The Queen - but that might be a state secret ?

Clearly McDonald's need to put their burger prices up 50% in NZ!

Clearly this whole thing is a very clever McDonald's marketing stance - nothing else!!
there is no better topic than Housing prices and every one wants a piece of it :)

God knows why the headline doesn't say "we have the cheapest McDonald's Burgers in the World"?!

Can you list the stats please that were used? E
G. Am sure the median floor space of a new York house is smaller than an Auckland house. Less rooms on average etc Would like to see all the data?

That's factually incorrect keywest as usual .... NY Metro area is 450k USD not 750k as you would have us believe.

Maybe you think it would be better to buy than to rent in New York? Think again. According to the National Association of Realtors, the average home price in the New York metro area is $455,500—but once again, by including the (generally cheaper) suburbs, that severely understates the situation. The table below shows average home value by borough for New York City.

yeah nah, current median listings are for $735k for NY City, NY metro area includes towns close to Toronto by Niagara falls (USA is a big place), maybe you should get a map of USA and take a look...just checked Manhattan again and as of Q1 2016 average apartment was $1.9 million USD

just asking for more information instead of half cooked Big Mac's....that is all.....I have no ego to massage, no point to prove...JP

You do have some rentals you want to inflate, for some tax free gains… that is your agenda.
While your tenants work hard in NZ paying tax, with little to show for it in the end.

All I am asking for is balanced reporting. My personal agenda is my own business, the agenda of interest.co.nz should be for balanced reporting, it would help if they stopped with click bait headlines and just gave some more detail perhaps in appendices, they do have a responsibility to be accurate and fair, and please all my tenants work very hard and I am completely missing your point? Why on earth are my tenants any of your business? Once again off you guys go again with personal attacks, it's like the Muppet show

I am convinced this Big Mac report upholds the highest journalistic standards and statistical rigour.

Look at the link I sent

Depends where you look I see Bronx average house price at 457k USD, remember some part of Bronx co-ops they sell for under 200k let's just say i'd b walking briskly at night through this neighbourhoods

I just love a media beat up

Why? You could convert them to Dong and get the exact same result.

If the prices are that high then why people still migrate to NZ?They must be choosing US and Australia.

Because not all of New Zealand house prices are that high.

US has a cap/quota system and probably 10 to 100 times more people want to move to USA than are allowed.

Currently holidaying in U.S.A. And part Canada and I can tell you that we are extremely fortunate to be living in
NZ?
Standard of living and convenience in NZ leaves the States for dead.
The Americans think their country is the greatest but Yeah/Nah.
After the American elections I reckon there will be plenty looking to get out and will head for Australasia.

All I can say to that is, unless we start looking after this planet a whole lot better and stop overpopulating it, there will be nowhere to move on to, to overcrowd.

Of course, all this is just proof that McDonalds needs to hike the Big Mac price in NZ, particularly Auckland. By not doing so they are really calling into question the validity of the Big Mac index. Come on Maccas.

I think NZ is still far better than big boys like Australia and US. That's why big Mac index is not real indicator. We need to compare life style as well.

The golden rule for property investment has always been...location,location, location.
People who bought in the peripheral areas might get their figures burnt.
If I had to buy property in NZ now I would be buying central Auckland with good access to the CBD. Congestion will continue to increase and people will pay more for centrally located property.
In a downturn centrally located property holds up better.