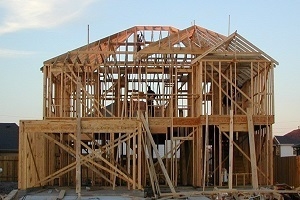 There were 30,123 new dwellings consented in the year to January, which was up 11.1% compared to the previous 12 months, according to Statistics NZ.

But in the month of January just 1752 new dwellings were consented, up just 3.4% compared to January last year.

And Statistics NZ said the trend line for the number of new homes being consented has declined 15% in the five months to January, after reaching a 12 year high in August.

"Most regions appear to have contributed to the recent decrease in residential consents, although Canterbury is the most significant contributor, followed by Auckland," Statistics NZ business indicators senior manager Neil Kelly said.

Nationally the vast majority of new homes being consented are still stand alone houses, with 1253 consented in January, followed by 285 townhouses, flats or units, 116 apartments and 98 retirement village units.

There is little good news in the latest figures, especially for people in Auckland being squeezed by the region's growing housing shortage.

It is estimated that 15,000 new homes need to be built in Auckland every year just to keep pace with its migration-fuelled population growth.

That's an average of 1250 new homes a month, and the 512 that were consented in January was just 41% of what is required, meaning Auckland's housing shortage worsened by around 738 homes during the month.

The amount of non-residential building work being consented is also declining.

In the year to January, consents were issued for 2,659,000 square metres of non-residential buildings, including shops, offices, industrial buildings and social services buildings such as schools and hospitals.

Even if they were consented there would be a bottle neck somewhere before delivery - the current bottleneck not demand but lack of credit for developers.
Maybe they could have a lower LVR to get supply going again, until the next combo of neck bottlenecks occur before Code of Compliance for the consented but not yet built dwellings (think drainlayers, surveyors, roofers, inspectors, chippies etc).
Supply for the ever increasing demand just cannot flow through as credit is not available because of all the other bottlenecks further down the track
Ever increasing demand for ever reducing supply is going to count for something, that's for sure
President of Property

I think you'll find they have given up on attempting to build in Auckland and are buying in Oamaru.

Seriously 'though, I know quite a few investors buying in other regions, such as, Hawkes bay, Central Hawkes bay, etc...

I am not really surprised , where new builds are so over-priced , and getting out-of-kilter with any sense of fair value

Agree. Not surprised at all.

The drop in value will be explained by the increased share of total dwellings comprising apartments / townhouses.

HNZ are ramping up in Auckland. That will mean levels should remain fairly constant. However I think it also means we will see a fall away in number of private sector dwellings consented.
Would be interesting to see in Auckland what proportion of the dwellings are HNZ

Also worth noting that the consents figures are not equivalent to net new dwellings, as many are for two dwellings to replace one (knock down the house, build two in its place) or 5 for 3 etc.

Also some consents get cancelled so no construction takes place, or the house(s) may not be completed for some time 2+ years.

New Zealand - Tying Our Own Shoelaces Together Since 2008!

Auckland has very high costs and so the mere suggestion that interest rates are increasing will impact Auckland quicker than the rest of the world. NZ will suffer as Auckland makes up such a big slice of our industry.

I predict as more building resources get sucked into the HNZ programme there will be quite a drop off on private dwellings. Which is not good.
Demand side measures required

I think we'll start to see another brain drain in the next few years. What reason do young people have to stay in Auckland? $700,000 Ranui palaces? Rents that are becoming more expensive than Melbourne (like-for-like) but with lower salaries with which to pay them?

A government hell-bent on running policies to drive up housing costs and drive down wages?

Sounds like a great mix for young Kiwis entering the workforce...

Almost $500,000 for a 2 bedroom leaky apartment in Auckland http://www.trademe.co.nz/property/residential-property-for-sale/auction… vs. the very nice two bedroom apartments you can get in Melbourne http://www.realestate.com.au/property-apartment-vic-melbourne-124749558 for around the same money.

Rising financing and construction costs are stopping development. This means prices likely to remain elevated for longer. Although I don't see prices going up I don't see the impending crash that some have been predicting.