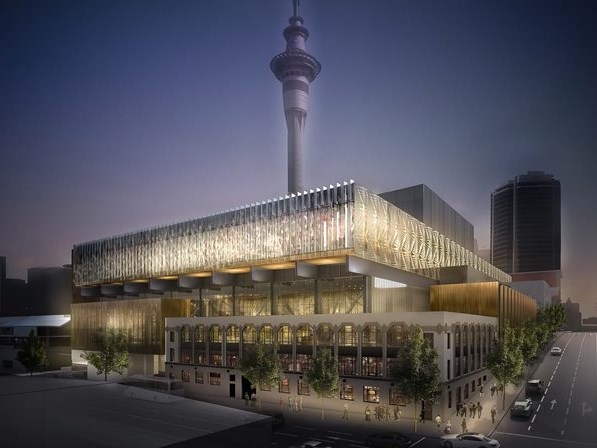 Government projects - namely the new Sky City International Convention Centre in Auckland and the new Justice and Emergency precinct in Christchurch are thought to be involved in a shock $150 million profit warning issued by construction giant Fletcher Building.

The shares in Fletcher Building have been under the hammer on the share market, down as much as 13%, at one stage after the company warned its earnings in the current financial year might be as much as $150 million less than it was telling the market only weeks ago when releasing its interim results.

The main problem apparently centres around a project that's due for completion this year - and which the company will not name. There's another project due for completion in two year's time that's also problematic. Media company Fairfax is reporting that the projects are the Justice and Emergency precinct in Christchurch and the new Sky City International Convention Centre in Auckland. Details from the company on the Christchurch development are here and on the convention centre are here.

Prime Minister Bill English said he had heard speculation around which projects were delayed, but had not had any specific conversations on the issue.

"We’re dealing with a very wide range of commercial operators and it’s up to them to deal with their own commercial risks," English said at his post-Cabinet press conference Monday.

Asked whether he had any concerns that government projects may not be completed as scheduled, English replied that the government did want to make sure infrastructure projects it was paying for were on budget and on time.

This is the statement Fletcher Building issued:

The company now expects operating earnings before interest, tax and significant items (“EBIT”) to be between $610 million to $650 million for the year ending 30 June 2017. This compares with the previous EBIT guidance range of $720 million to $760 million.

The revised guidance is due to the identification of additional estimated losses and downside risk in the Buildings and Interiors (“B+I”) business unit of the Construction division.

A thorough review of the B+I business and projects began in late calendar year 2016 and led to new management and governance processes. A significant loss was recorded for B+I in the half-year results based on the best estimate available at the time. However, management has now identified an increase in the estimated loss on the major construction project which was referenced at the time of the announcement of the H1 17 results, and the identification of downside risk on other B+I projects, with the majority being a provision for expected losses on one other major project.

Chief Executive Mark Adamson stated that it was extremely regrettable that expected profitability for FY17 in the Construction division has worsened since comments made at the time the H1 17 results were reported.

“It is very disappointing that the review of the B+I business unit has found weaker performance than we had previously understood.”

Trading for Fletcher Building’s other divisions remains in line with expectations previously discussed in the first half earnings commentary.

Last time I looked the price rebounded slightly after this mornings low. There's a lot of orders up with people wanting to buy the shares.

I wonder if the problem project is the Christchurch Justice and Emergency Services Precinct? Fletchers are the main contractor, and the Justice Ministry was due to take over in 'early 2017'
https://www.justice.govt.nz/about/about-us/our-strategy/christchurch-ju…
The project is not finished yet and I have heard that it is well behind schedule...

If there is going to be blood on the carpet,it had better reach all the way to the boardroom.

I wonder if the board will still have the audacity to pick up their bonuses or ask for an increase in fees. If past history of public companies are anything to go by, I am sure nothing will happen to their pay packets!!

So their executive team, including Adamson, reviewed reports from his construction division senior managers month after month through 2016, listened to (probably) quarterly personal presentations from them, had his risk management division bloodhounds watching like hawks, looked closely at daily/weekly variance to budget analyses completed by his management accounting team and no-one saw anything amiss until late in the year, despite a $100m hole that had to have been very obviously developing well before then.

If fraud is not to blame and simple line manager incompetence is the cause, it defies belief that the shiny suits in Fletchers hierarchy didn't pick up this up well before the end of 2016. Given their ineptitude, one wonders if they really have got a proper handle on the extent of the rot.

At very least there must have been some over-optimistic claims for money that wouldn't be recoverable within the contracts. That's a very optimistic gap and one that led to a halt in trading.

The price hit seems to have dragged the NZX50 down but has hit the TNZ index pretty hard as well.

It's expensive to replace all that dodgy steel and dodgy concrete.

With massive materials quality frauds being exposed, earthquakes exposing substandard construction, growing rage at winky winky materials price gouging, and the property market crashing ... is Fletcher too big to fail, or too big to save?

Will our government continue to cosset Fletcher Construction, or will they cut Fletcher loose to save themselves?

In a competitive market the Gubmint would cut them loose, find another company and the public would watch them drown. Unfortunately, if that happened, what company would take their place as the go-to firm? The replacement one would simply jack up their prices to Fletcher's levels and we would be right back to square one. If Fletcher failed I bet they would be bailed out a-la SCF.

When we reached the untenable situation where someone who dropped out of school and can use a nail gun on a building site, has a charge-out rate higher than a medical Doctor ?

I was further galvanized into this decision in September when we got a bloke in to do some landscaping before the summer , and he told me that he was buying off-plan apartments in Auckland , and went on to tell me that I "should do the same , mate " because I " would miss out " if I did not do so .

I told my wife that we had got some investment advice from the bloke driving the digger at the bottom of our lifestyle block , and we had a good chuckle about ti

Quite simply , building cost escalations have now gone beyond the point of fair value , everyone is rorting the system from land developers to architects , Auckland council fees , levies and connection charges homebuilders , scafffolders , stone suppliers , concrete suppliers , the oligopilists running the 3 materials supply businesses , chippies , gib fixers , glazers, door hangers , painters , roofers and cabinet / cupboard makers , landscapers and anyone with a ute and a pair of hands passing himself off as a 'builder" , and are suddenly 'experts "

Ah! For the good old days of cost plus building Even more amazing because Fletcher's were handed ChCh rebuild on a plate by a govt keen to parcel off responsibility
In the old days the taxpayer would just stump up the extra

End your financial worries now: I can smile that God-fearing man, who had secured $ 76,000 Usd and two of my colleagues have also received loans from this man, without any difficulty. I advise you not to choose the wrong person, you will definitely apply for a cash loan for your project and each other. I wrote this post, because Mr. Favour Henry, made me feel blessed their loans. It's through a friend that I met this honest and generous God fearing man who helped me get this fund to pay for the loan of your life, you need financial help, you're stuck, do not have access to bank credit, or not in favor of the bank to finance your construction, real estate development, the development of your business your own business, you must have seen and earn money, bad credit or need money to pay bills or debts. Therefore, we recommend that you go there, please contact and meet with you for the services you ask for it. Contact address: MRFAVOURINVESTMENT@USA.COM and MRFAVOURINVESTMENT@OUTLOOK.COM

Wow, not only a spam post, but a zombie spam post. Thanks so much for this gift!!!!

I can feel my financial worries just melting away harmafelica you hero.