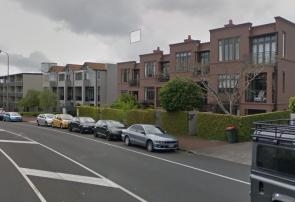 Land can be defined as brownfield or greenfield. Brownfield development occurs on land that has already been developed and therefore has existing infrastructure. Greenfield construction is done on land that has not been previously developed, usually further from the CBD.

Over the three years prior to adoption of the Unitary Plan, the share of development happening in brownfield areas fell steadily.

In the months immediately following the adoption of the Unitary Plan, this trend continued, creating questions over how effective the Unitary Plan would be in stimulating brownfield growth.

However, since the second half of 2017, the market appears to be strongly responding to the Unitary Plan upzoning, with huge growth in brownfield consents, even as total building consents issued also continue to rise.

Why brown is our favourite colour

Development anywhere requires investment in infrastructure that could include waste, storm, and potable water pipes, and road upgrades. But there are advantages to brownfield development.

While brownfield land typically costs developers more than greenfield land, brownfield development benefits the city in several other ways that expanding Auckland’s footprint does not.

• use existing infrastructure capacity
• create the intensification that makes public transport and other amenities more feasible
• impose fewer external costs (like long-distance congestion) on other users of the transport network.

While some greenfield development will likely be needed to accommodate Auckland’s growth, Auckland Council’s Future Urban Land Supply Strategy (FULSS) has estimated that greenfield infrastructure will cost around $140,000 per dwelling on average, far more than in brownfields.

In addition to using existing infrastructure better, brownfields allow for more viable public transport and shorter distances to a large number of amenities.

Since Auckland Council was established in 2010, there has been an increased push for development that does not expand Auckland’s urban footprint but instead increases density. This has been formalised in both the Auckland Plan and the Future Urban Land Supply Strategy, which both call for 2/3 of growth to be in urban areas.

By looking at the proportion of dwellings consented inside the brownfield boundary, we can see how development trends have changed through time.

Since 2013, the proportion of brownfield residential building consents had fallen. 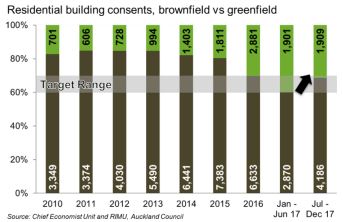 However, the second half of 2017 saw this trend reverse, indicating a lag between enabling development at the end of 2016 through the UP, and development patterns responding. The earliest we were likely to see the UP begin to change where development happened was March or April 2017, as the most on-the-ball developers got their resource and building consents squared away. But in reality, it took three to four months more than that before the pattern began to change significantly.

The monthly data (not shown) indicates from July the trend has been consistently upward month to month.

Additionally, the growth in total consents issued has continued, with 50% more dwellings consented in the last 6 months of 2017 than in all of 2010.

These trends are further illustrated in the maps on the last page of this commentary. The first shows all residential dwelling consents 2010, while the second shows the same for 2017.

Each dot represents a building consent, with the colour and size of the dot indicating the type and number of dwellings on each consent.

The maps also show the brownfield and urban boundaries. These maps highlight at least four trends:

• The total number of consents was dramatically higher in 2017 than in 2010.
• The number and density of dwellings consented near the city centre is much higher in 2017, which is in line with the goals of the UP.
• There is also significant dense development on the city fringes, which is resulting in additional sprawl (see the clusters of development near Albany, Kumeu, Hobsonville, and Beachlands for instance).
• Though detached dwellings (represented by blue dots) are still the predominant type of construction consented, the prevalence of attached dwellings (red dots) has massively increased over the past several years.

If brown is better, why still so much green?

Developers like greenfield projects for at least three reasons.

First, greenfield development may be easier. Developers have larger “blank canvas” pieces of land to work with, and the ability to build entire communities rather than smaller groups of houses.

Having said that, enabling more brownfield development does seem to have impacted where new residential construction is taking place.

Where do we go from here?

It is too early to say with certainty that the UP has met all of its goals. However, the recent increase in brownfield development is certainly encouraging. This is something that we will continue to monitor.

The good news does not mean, however, that Auckland Council should not seek to improve its policies and incentives for development. Currently, general rates payers are heavily subsidising greenfield development. Regardless of the geographical patterns of where dwellings are built, we should be striving to ensure that infrastructure is priced correctly, so that it sends the right market signals and so that by and large, those who benefit most, pay a commensurate share of the cost.

The detail: Defining brown and green

While there is a conceptual definition of brownfield and greenfield, there is no statutory definition of what land is currently in each category. As a proxy, we examined Auckland and determined which areas had already been developed. Areas that had already been developed by July 2016 (the nearest review point to the UP becoming operative) are considered to be brownfield. Anything undeveloped by that time is considered greenfield. 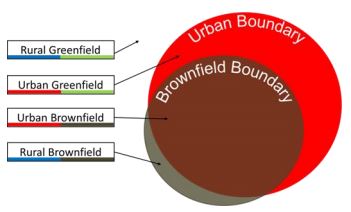 Land can also be defined as urban or rural. The line that divides urban and rural is called the Metropolitan Urban Limit (MUL). Urban land can include both brownfield and greenfield. By similar logic, anything inside the 2010 MUL is considered to be urban with anything outside considered rural.

The reason we don’t use the MUL in our headline analysis is that there are many areas inside the MUL where there is no existing infrastructure (i.e., greenfield). The goal of more compact development is the relative ease and lower expense of development. Using the MUL (which includes both green- and brownfields), does not allow us to track how much development is taking place where infrastructure already exists. 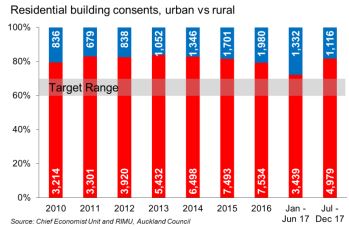 But for completeness sake, we present the data using the MUL definitions in the chart above. The pattern is similar to that for brownfield-greenfield development; development has veered back inside the MUL in the last six months. 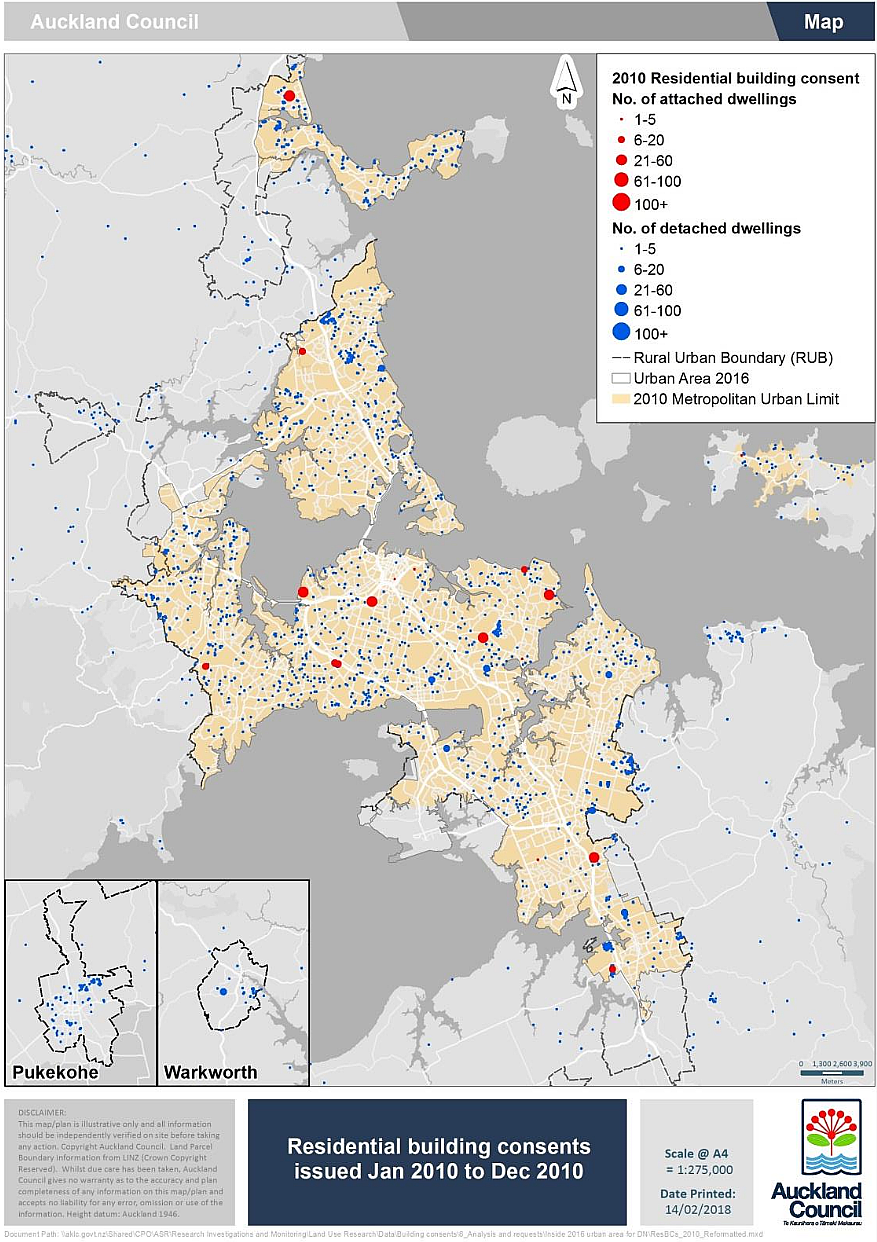 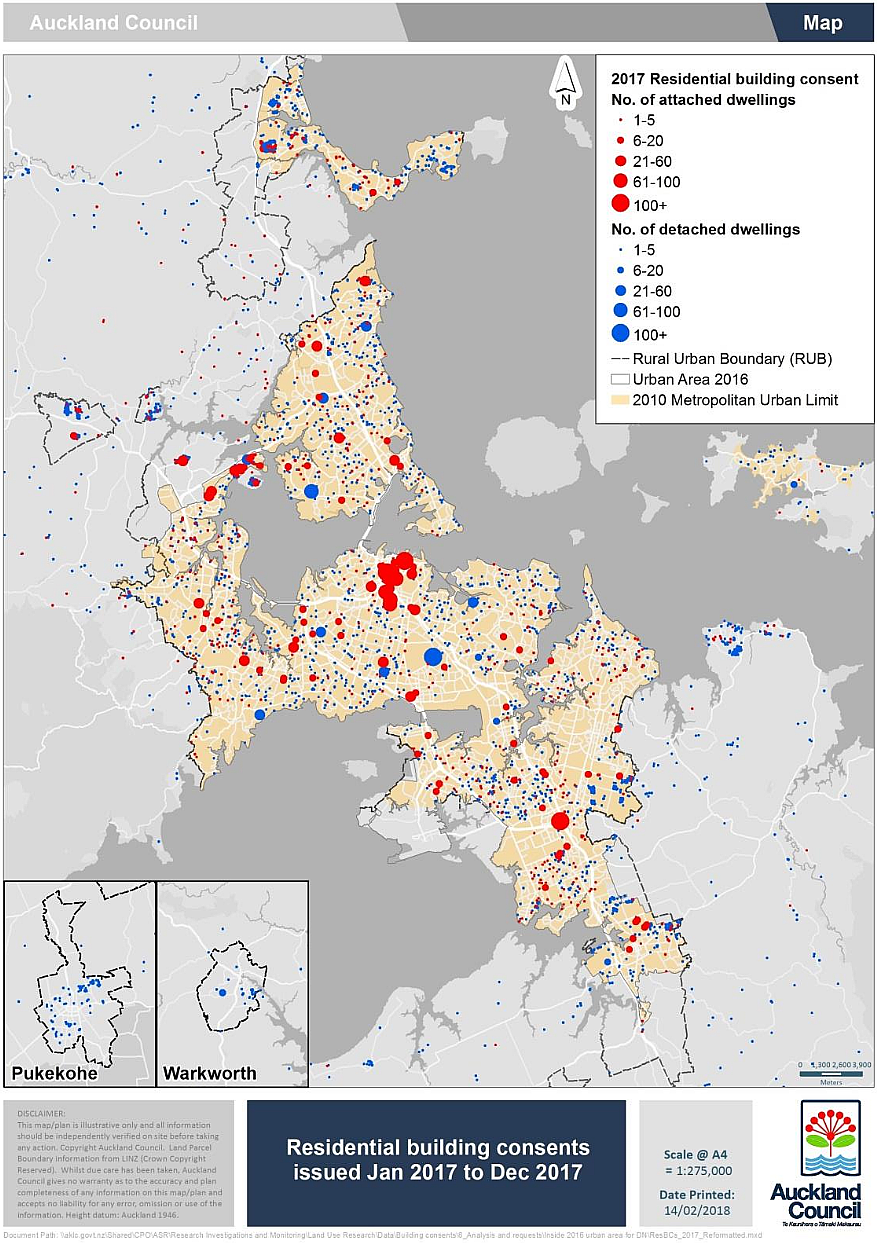 To say that the cost of infrastructure in Brownfield developments is always less than green fields is misleading.
There comes a point where the existing infrastructure becomes overloaded. Water/stormwater/wastewater etc A good example is Lake Rd Devonport bottleneck. Its extremely expensive to fix and the council have made it even more expensive by changing the zoning of land bordering this road to a more intensive zoning. But the council in its wisdom are continually allowing higher intensity developments than the unitary plan allows ("because the effects are less than minor") without any regard to these issues. After taking money out of the budget many years ago, no doubt the council will apply a "targeted rate" so that everyone in Devonport will pay again for the councils lack of foresight.

Well he could be right.......... as we are forced to go up , even though the properties for demolition are way more expensive than greenfield projects .

I notice that immigration numbers are UP not down as Winston Peters and Labour promised in the election.

So its just more of the same then , nothing has changed

It is good that Auckland is seeing some uptick in the house building rate -especially the intensification rate. The Auckland Council economists attribute this to the Unitary Plan and the timing of the intensification change is indicative of that -but it is one data-point so it is early days......

Also remember that since 2010 Auckland's population has increased strongly on the back of high net migration rates so a building boom is to be expected and is absolutely needed -the current building rate is still below what is required to adequately house this increase in population. Houses in Auckland are being rationed and price is the rationing mechanism -which is affecting the labour market -teachers in Auckland in particular are getting a lot of publicity re the difficulty of attracting new staff to their profession.

Although I agree with much of what the economists say in this report about brownfield vs greenfield growth and the need for each to pay for the full cost of development I did not agree with the 'she'll be right' tone of the report. The underlying message of the report seems to be saying -'don't worry the Unitary Plan will solve the housing crisis -just give it time'.

The reality is more needs to be done. The Unitary Plan was only the first step. I discuss this in the following report with some of my personal recommendations, here.
https://www.greaterauckland.org.nz/2018/01/29/downsizing-aucklands-unit…

Local government's in NZ have a strong dose of the British town planning disease. They don't really believe that people have a fundamental right to build shelter for themselves. Somehow they have changed a natural instinctive process that is absolutely required by every reproductive culture, to something that requires housebuilders deal with a Kafkaesque style bureaucracy.

Councils do not seem to understand they are part of the problem. That their regulations are too complicated, too restrictive, that they are not adding value to their communities.....

Here is a good example of the debate about this in the UK. http://www.rationaloptimist.com/blog/britains-odd-housing-regulations/

No economist can look at a topic objectively when they are being subjective.

When we show or have a preference for a certain outcome then all the inputs we use will generally ensure that the preferred outcome we want is achieved.......

I couldn't help but think about this when thinking about housing density.....yip you can stack em in:
https://www.youtube.com/watch?v=SqGRnlXplx0

Whenever I read anything from these two economists.....they want density for a variety of reasons.....they talk about Auckland not increasing its footprint:
https://www.aucklandcouncil.govt.nz/about-auckland-council/business-in-…

A simple two things everyone seems to forget.
1. It is the home owner that needs the cheapest deal when buying a house.
2. It is the Council who needs their services to be at or near capacity.

House prices are a reflection of the friction between 1 and 2.

Theory is a fine thing.....but results give the true story!