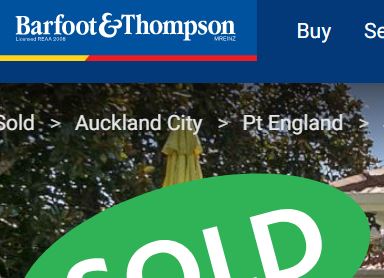 Things were quieter in Barfoot & Thompson's auction rooms in the week after Easter, with 142 properties marketed for auction and sales achieved on 51 of them, giving an overall clearance rate of 36%.

The biggest auction of the week was on the North Shore, where 35 properties were scheduled for auction and sales were achieved on 12 of them, giving a clearance rate of 34%.

A notable feature of Barfoot's auctions last week was the high clearance rate for the properties auctioned on site, with 55% sold, and at the Shortland Street auction on April 4, where most of the properties offered were in central Auckland suburbs such as Mt Eden, St Heliers, Epsom and Grey Lynn, and the clearance rate was 48%.

However sales remained sluggish at the Manukau auction, where most of the properties offered were from south and east Auckland and the clearance rate was 14%.

The table below gives the overall sales results at Barfoot's various auctions last week, while details of individual properties and the prices achieved for most of those that sold are available on our Residential Auction Results page.

there has to be some level of desperation from vendors to keep choosing Auctions, when they know the success rate is relatively low.

You can really call it a desperation, even the leaky units are still up for auction. They probably have forgotten what property auctions are meant for.

Yes, sadly in the case of leaky units, the word desperation is appropriate, in most cases the hardship is too much and they have to sell..

Never under estimate the power of optimism bias.

Still it's not just us with listing up, sales down and prices gradually sliding as reality of our situation kicks in.

New York and London as well.

Greg, how about showing the addresses of the properties sold, and the price it sold for, and how that compares to the latest CV. This would be very helpful for everyone to see the trend without all the fighting from the left and the right. Unless of course thats exactly what you want !

Let me help you with that, although not all data you mentioned are available but still it's doable.

These reports are of the success rates, individual sales results dont tell you much when the 70% that dont sell probably tell a bigger story.

For instance what was the highest bid against the CV for ones that didn't sell and what was the starting bid & the reserve???? Not practical to report though.

That's the problem aye. Vendors are the ones that ultimately decide whether a sale goes through, and most vendors i'd say are looking for at or above current CV's. So of course when Zachary Smith goes and collates the data house price averages are looking good, regardless of the fact that it's only 30% of properties that are "worth CV".

Sooner or later some people may see Capital Gains dropping and accept the price that they are offered before it goes down even more. Then others may jump on the band wagon as they see their capital gains erode because of fear.

But no that couldn't happen in NZ because NZers are not human at all they have no fear and they are all astute investors. We are different to all nations in the world. Must repeat 10 times.

Very interesting video on misrepresentation of auction clearance rates in AU, it would be interesting to see if that happens here to some extent:
https://m.youtube.com/watch?v=JCk0on_RR8M

What happens in property markets abroad would be an unreliable indicator of what might happen in New Zealand.

Until it pulls down the Australian Banking Sector and they decide to pillage their subsidiary branches in New Zealand with the full backing of the APRA?

Good evening 'tothepoint' .....in reference to your statement above ...."What happens in property markets abroad would be an unreliable indicator of what might happen in New Zealand".

What makes you so sure that this is the case ? ....evidence please ?

It would be fantastic if NZ residential property was "bulletproof" to what is happening in the rest of the world .... I would be buying NZ property like there was no tomorrow !

But frankly, you sound like that "know all uncle" at a summer BBQ

Easy to know a lot when you don't provide facts.

Just like a person I know. Some person who made a lot of money in business told him it was luck, he was just humouring him. But now the font of all knowledge thinks its luck to start a business, and no matter how many times you tell him about the difficulty of starting a business from scratch, developing a website with the appropriate infrastructure, getting investors, doing sales pitches, understanding and complying with legislation etc he still thinks it comes down to luck.

He reminds me of TTP.

TTP's again missed the point. Todays 90sec @ 9am reports that property markets are now globalized. Everyone here knew it, but you!

It was Global monetary stimulus that got us here, it's the global debt hangover that will get us somewhere else together, and not necessarily in a good way.

B&T sell rates at Auction have been typically low for some months, it beggars belief as to why so many vendors choose a 'B&T Auction a minute' process, who wants to be one in 30 Auctions with a time limit in shortland st central Auckland!
There are better and more personalised options out there from companies that offer significantly better results.
Auctions are still the way to go, just not with B&T it appears.

Like with Unlimited Potential ,I would hazard a guess lol....

LOL. Mind you he does have a point

I wonder if there’s been any research done on the psychology of the different sales methods for each side, eg, do houses listed as tender offers deter buyers? I suppose there’s probably too much subjectivity to determine the “best” way to buy/sell in a market at a given time.

Jeez Bret your still sore at being sacked by Barfoots, let it go man! Focus on your race relations training and don't sweat the small stuff.

It would be of greater utility if we were told (if they will?) HOW MANY listed properties for sale go to auction, in absolute numbers, with record on this back 5 years, and % total listings going to auction. At present all we are being given is % sold on day (IF that is what they mean by "clearance" which needs to be defined also. Patently the numbers GOING to auction is falling and has been for a while, as well as % "sold" at auction, as a % of those going to auction. 32% of a lot fewer than last year is OBVIOUSLY a lot fewer.