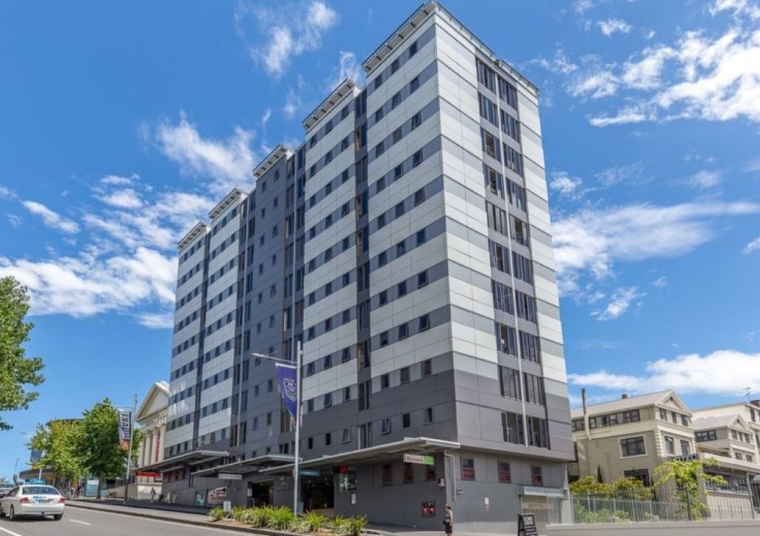 There were plenty of apartments on offer and plenty of bidders prepared to put their hands up, but it was hard work getting agreement on price at the latest Auckland apartment auctions.

Ray White City Apartments had 12 units on offer at this week's auction, a good selection that included CBD shoeboxes, larger more luxurious properties suitable for owner-occupiers, a couple of leasehold units and one in a leaky building.

And there was no shortage of people willing to buy them.

Of the 12 units, nine attracted multiple bids with some of the bidding being quite spirited, one attracted a single bid and two attracted no bids.

A couple of the more interesting offerings were two identical two bedroom units, each with a car park, in The Landings complex next door to the historic former Auckland Central Railway Station building.

The Landings is a leasehold complex and the ground rent was $5800 a year on one unit and $5998 on the other.

The Landings has also recently had extensive remediation and refurbishment work carried out and a new Code Compliance Certificate issued.

Both units attracted multiple bids but both were passed in at $205,000. But because they both had the same vendor, they were then offered together as a package and sold under the hammer for $450,000, or an average of $225,000 each.

So prospective buyers were prepared to pay more for each of them when they were offered two together, than they were when bidding on them one at a time.

By the end of the auction five of the units had been sold under the hammer with the remaining seven passed in for further negotiations.

At City Sales' auction this week six units were on offer, also a good mix of types and sizes, with three of those attracting multiple bids, one attracting a single bid and two getting no bids.

By the end of the auction two had sold under the hammer and the others were passed in. A couple of those passed in attracted bids that were getting near their reserves so were likely sold in post auction negotiations.

So activity in the auction rooms is picking up with plenty of stock and buyers out in force, but they are being extremely cautious on price at the moment and any vendor that has overly optimistic price expectations is likely to be disappointed.

Details and photos of all the properties offered at both auctions and the prices achieved for those that sold are available on our Residential Auction Results page.

Great detail Greg, thanks. How small is a 'shoebox?' Are they too small for an Orclander, but large enough for a hobbit?

It was standing room only as 1.57 million Aucklanders turned out en masses frantically bidding on just 18 properties from a pool of 570000 ,basking in the spring weather ,the apartment balcony gardens stunned prospective purchasers,as they saluted the auctioneer with single arm swings

Things have been a bit on the downswing in the major centres but we're not talking 40% declines!

You truly are a bear among bears. When animals attack...property investors.

Take a look at UK, Canada, Aussie etc. (some will say but interest rates were higher...... yes but mortgage debt was less than 20% of where it is today... Rates hardly need to move now, but will have to at some point or inflation will murder fixed incomes.

When there are a lot of desperate and time pressured sellers who urgently need liquidity and there are few active buyers in the market, these sellers are price takers (as they have significantly reduced negotiating power).

Currently there were 1,071 apartments listed for sale in central Auckland on trademe.co.nz.
Don't know how many apartment sales were made in September, but there were a total of 1,616 property sales (apartments, houses, units, townhouses, sections, etc) in all of Auckland in September.

I wouldn't pay $300,000 for a shoe-box in Auckland .. It would have to be one hell of a shoe-box - near new, north facing, parking space included and none off this leasehold nonsense. Even then .. what are the body-corp fees and area like!?

No thanks .. but I am from Christchurch.

I've seen buyers competing with no-one other than the Auctioneer's Vendor bid.

One woman I witnessed last year bid herself up in an empty room from $1,000,000 to just over $1,425,000 - it was just her and the Auctioneer bidding. No doubt her husband (who was absent from the Auciton room) must have been delighted! Or maybe she just came up with a story about how competitive it was.

Vendor bidding should be made illegal. Too many people just don't understand what's happening.

auctions are a rort.

God help anyone who doesn't understand what auctioneer vendor bids are. What I really like, and you would love this Nic, is negotiating before the hammer fall, with the buyer via the agent.

Did folk already cover off what happened to 18 Gretel Drive, Hillcrest?

Somebody made a lot of money.

I have done a bit more digging and discovered that this property sold in 2011 for 604k. Now increasing in value by 800k (130%) in just four years seems unlikely to me, especially as nothing much was done to it.

(Edit) I see that QV records a sale in 2008 for 558k. There's been about a 100% increase since then indicating that this recent sale price is perfectly in accordance with the ZS principle :)

Also, when you think about, if you did pay 1.4M for it three years ago you are unlikely to sell it under the hammer on the very first auction for two hundred thousand less. You would put up a bit more of a fight than that.

Selling for 1162k translates to a 92% increase in just seven years. That's fairly spectacular. Verdict: A win for the vendor.

What a terrible yield. That money would have done much better on the NZX50 or S&P 500.

I hope you are borrowing all the money you can to invest in shares. Will have that house in Oz bought and paid for in no time.

Why the buyer of that house didn't buy Amazon or Apple shares back in the early 2000s we will never know.

However the point of these comments is to determine if this house is the canary in the coalmine we are searching for. Not this one. We have to keep looking.

I am talking about investing in a diversified ETF that tracks the top 50 NZ companies, or the top 500 US ones. You are talking about picking and choosing individual stocks and trying to predict the market. There's a big difference.

What I propose not only would have out-performed Aucklands housing boom by a lot, it's also considered standard advice for any beginner investor.

And no, using a something volatile like shares to save for a housing deposit is a pretty risky thing to do. They're a volatile, long term investment... just like real estate.

It may well not have performed as well as the NZX50 but was still pretty okay nonetheless. People aren't too keen on borrowing hundreds of thousands to invest in shares. 1929 Wall Street crash, jumping off top floors, because borrowed money to buy shares, that sort of thing.

“J. K. GALBRAITH, in his classic study of the 1929 Wall Street crash, wrote: 'In the United States, the suicide wave that followed the stock market crash is also part of the legend of 1929. In fact, there were none. The press, though, did not let reality stop them from running lurid stories about huge numbers of suicides.”

I grew up though with the folklore of window jumping – it seemed so very plausible.

I think it was in some movie we all watched as kids. Left us traumatized.

Will Rogers happened to be in New York on "Black Thursday," Oct. 24, 1929. In his nationally syndicated newspaper column for that day, he wrote: "When Wall Street took that tail spin, you had to stand in line to get a window to jump out of, and speculators were selling space for bodies in the East River." The New York correspondent for one of London's sensationalist tabloids wired home that lower Broadway was clogged with corpses.

Interesting link - and another reality check.

I know for a fact that Richard Russell (of the Dow Theory Letters, longest running newsletter regarding US stocks), had an Uncle who killed himself soon after the crash. He was 5 years old, and he was his favourite relative and it deeply affected him and his approach to the markets as an adult. So don't believe all you read. Galbraith was being facetious referring to suicide literally on Wall Street (apparently there were two). But if you were a stockbroker and went home and killed yourself, this was not considered to be a Wall Street suicide by Galbraith.

It's a bit dramatic to use the 1929 Wall Street Crash as a reason not to invest in ETFs. That's like me using the 1945 bombing of Hiroshima and Nagasaki as a cautionary tale about investing in real estate in the pacific.

Are you just suggesting QV and Real Estate have the wrong info on their listings that 1.4 million sale never took place?

Just trying to get it straight.

I'm referring to the previous owner.

I'm surprised there's any market at all for shoebox apartments - even in Auckland.

Certainly, I wouldn't live in one.

I assume you aren't the target demographic - young, single, etc.

I thought the target market was a breed of dog known as the Chihuahua.

At that price point, what are your alternatives?

'Units' are pretty nasty. They almost always have shitty walls between them and in many cases are designed so that cars and or people are going past your bedroom window. I'd much rather live in an apartment than a unit in the suburbs.

hmmm as opposed to $700k for a similar sized two bedroom apartment in Onehunga. Not much of a comparison really.

You're speaking my language! Who the hell would want to buy in Auckland when that value is on offer

Not sure how many new build apartments are coming on board in the next few years in Auckland.

Yes, it was interesting to hear in the Martin North video with Edwin Almeida about the apartment block that had all 60 off the plan buyers walk away and forfeit their deposits. And now because they aren't new titles can't be sold to overseas investors. Not quite sure I believe it, but an interesting event if true.

There was some coverage of the same happening to off the plan investors in Auckland a while back too.