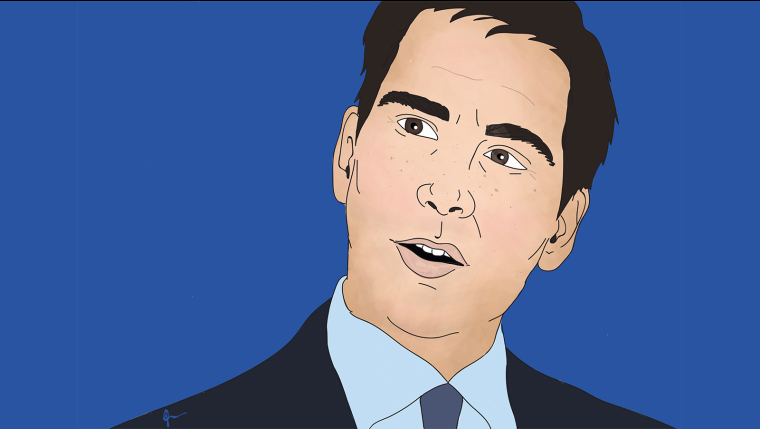 “Simon has prodigious skills, incredible talent and the intellectual heft needed to excel as National’s Finance spokesperson. He is ideally suited to prosecute the wasteful spending decisions, spiralling debt and rising costs of living occurring under the Labour Government," Luxon says.

“It’s important that our economy is sustainable, and that means ensuring that we spend effectively and with discipline," says Luxon.

He says public spending must be brought under control because otherwise costs will rise faster than wages.

"We need an overarching vision for New Zealand’s infrastructure and new funding and financing mechanisms that can drive us into the coming decades. Simon will play a central and critical role in our leadership team, and he and I will work closely together," says Luxon.

Simon in charge of finance...is the National talent pool really that shallow?

Or was it part of the deal to withdraw from the leadership contest.

Verses Grant Robertson, who has no financial training what's so ever!

What training does simon have, isnt he a lawyer?

I believe he was a lawyer for the Crown.  So he is considerably less qualified for the role compared to Grant Robinson.

He did spend some time studying at the London School of Economics, but I can’t find any details on what he did there. Anyone have the answer?

Apparently there was a typo on Soimons CV...it was the London School of Home Economics..

That was The London School of Home Economics...the only beans he counted were the ones he warmed up on toast...

The Big Read: Where are Northland's bridges? - NZ Herald

He was an associate Finance Minister at some point.

will be interested to see them go head to head

Robertson has a BA (Hons) in politics from Otago.

Bridges has a BA LLB (Hons) from Auckland where he was a senior scholar (top 5 in graduating cohort), time at LSE, and has a BCL from Oxford.

On a personal level, Robertson looks more interesting than Bridges. But academically, Robertson and Bridges aren't in the same league. Bridges would be in the top 1% of lawyers (intellectually) in New Zealand with that academic record.

It will be interesting to see how this duel plays out. I will give Robertson credit that he has been stronger than I expected.

As we all know,politics isn't a competition of who got achieved the best marks at school.He will have to resonate with the public and I guess he couldn't do any worse than he has before with his popularity.

His father was an accountant and was imprisoned for embezzlement.

I wonder how Luxon would answer the question as to why productivity did not improve over 9 years of the last National government, led by such a successful businessman as Key?

I am not expecting a genuine, honest answer.

Luxon will not anger National's core voters (housing speculators, tourism operators, hospitality businesses) in his first week on the job by admitting easy access to low-skilled migrant labour has been a drag on NZ's productivity since the Key era.

What did Collins get ? The job of Tea Lady ? Probably not she would keep eating all the cakes.

You come to NZ's pre-eminent financial news website, and that's your input?

You should be ashamed.

Not at all it's about time that nasty piece of work got kicked to the kerb.

You reckon Bridges got a pay-off from Luxon? That's nothing!

Former Reserve Bank of Australia Governor Glenn Stevens will take on one of the most prestigious roles in the corporate landscape when he steps up as chairman of Macquarie Group and Macquarie Bank in May.

This would be the same Macquarie Group that was rescued from financial oblivion in 2008 by understanding intervention?

Lets hope he has a better abacus than Paura Goldsmith from the Ngati Epsom tribe did last time.

Speaking of Paul,what has he been up to lately?

He's getting the traditional tattoo of his Iwi.

You have to feel sorry for Luxon...he came in the other day and said to the party "right, we need to set up a global recruitment drive to select the cleverest minds available to fill the roles I have coming up"...then was surprised to hear that isn't how it works in politics,you get what you have in front of you.

Apparently you don't even get to choose the members of the team you are given."Imagine running a business like that" he said.

So Luxo has been in the job 3 days and in that time he has done a back flip on on his faith by suddenly deciding to vote in favour of the Abortion safe areas bill that he had previously voted against.

He has announced that he will be re-looking at the housing accord that his deputy Willis formulated and sold to Labour as a joint venture on the housing issue.(The amendment he will probably want is no changes to the status quo in the 'leafy suburbs')

Now he has promoted Bridges, based on his prodigious financial experience to the role of finance minister and #3 in his shadow cabinet and says NO deal was done prior.

Can't wait to see what Judith gets in return for sitting quietly at the back and not rocking the boat.

He has one thing in common with Jacinda. No idea of the increase in value of his property in Rimuera.

Also a member of the rentier class. Not that I have a problem with people owning a number of investment properties and renting them out. The problem is a vested interest in keeping the status quo and not attempting to level the investment playing field.

I see this site seems to have been invaded by a bunch of Labour activists. I used to like the full range of intelligent views expressed here in the comments section.  Now it seems you have to wade through too many stereotyped political barbs to find gems of insight.

We all need a bit of levity in these tough times...

Albert Einstein attributed his brilliant mind to having a child-like sense of humour. Indeed, a number of studies have found an association between humour and intelligence.

Your policy.  “Remember we welcome robust, respectful and insightful debate.’’

A few months ago, we were seeing a huge trend of appearance based insults for politicians, there was a clampdown, and that's mostly not a thing anymore.

Next opportunity is to cull everything that doesn't meet 1 of those 3 criteria. What a pleasure that would be to contribute to and read.

If you like this comment, and don't contribute via PressPatron, you should, so Interest.co.nz can afford more moderation :)

And the best House oratory is often built (at least in part) around humour - the better to keep the audience focussed.

Basically, General Debate speeches vary widely because MPs get to decide how they approach it, what they cover and what to say. The best are impassioned, moving or funny.

We’re focussing on funny because General Debates are Parliament’s main stage for jokes, and the listening MPs lap it up just like the audience at a stand-up comedy event. Like a stand-up audience they are also at constant risk of becoming the target of a joke.

Sometimes they even seem to enjoy speeches from their opponents. Even jokes aimed at them.

Pretty gutsy move elevating Bridges' status by giving him the most important portfolio in the cabinet.  I would guess that maximises National's chance of repairing any real or perceived internal division.

"He is ideally suited to prosecute the wasteful spending decisions, spiralling debt and rising costs of living occurring under the Labour Government"

Can he comment on the wasteful spending and spiralling debt caused during his time as Transport Minister?