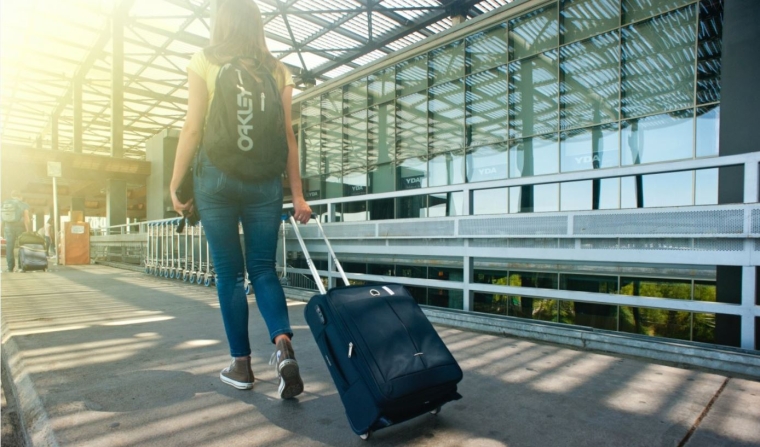 As for people who aren't from visa waiver countries, including travelers from China and India, they won't be able to come to New Zealand without booking a spot in MIQ until October.

It's worth noting there are separate timelines for international students, essential workers and people using other visas.

Travelers will be required to produce negative Covid-19 tests pre-departure. They will also need to do tests on days 0/1 and 5/6.

Asked how foreigners will fit into New Zealand's current Covid-19 restrictions, which include the requirement to produce a vaccine certificate when visiting a restaurant for example, Ardern said the Government will review vaccine mandates and certificates next week.

“It will also take a while to get back from 21 to the 43 direct flight connections we had to cities around the world,” he said.

Tighe-Umbers maintained it was vital for the Government to keep up with its counterparts overseas in re-opening, so airlines didn't overlook New Zealand in their planning.

"Competition around the world for the tourism dollar is strong,” he said.

"The most important aspect of today’s announcement is that it provides certainty for travelers to plan ahead and make their bookings, and for tourism operators to prepare their businesses, hire staff and renew contact with their international markets," she said.

"Many parts of the tourism industry operate to long lead times. Airlines and the cruise sector in particular are finalising their schedules and selling itineraries for next summer."

Tourism Minister Stuart Nash said, “Australian travelers are the immediate focus given the ease of travel on the short-haul route. Their school holidays and Easter-ANZAC break in April are popular times to make the short hop across the Tasman.

“The new Tourism New Zealand campaign seeks to persuade Australians that our unique landscapes, hospitality and the friendliness of Kiwis are now ‘within your wildest dreams.’

“We also have our ski season getting underway from June. Historically, 71% of all international tourists who came to ski were Australians, who generated more than $211 million in winter spending.

“The industry knows there is a rebuild ahead. International travel will be very competitive and airlines will take time to build up their schedules and routes. Even some of the world’s largest tourism operators, such as Heathrow airport, are predicting a five year rebuild.

“The initial bookings from international tourists will be measured. In the first few months we expect people will travel mainly to connect with friends or family, before travel picks up for winter holidays, ski tourism, and ultimately our peak summer season in 2022/23.

“Our investment and partnership with the sector will continue. Tourism New Zealand has also spent the past two years targeting trade shows, and has trained 80,000 international travel agents who connect foreign travelers with New Zealand destinations and operators.

“Tourism New Zealand will keep a strong focus on domestic tourism. It had solid results with the ‘Do Something New, NZ’ campaign which encouraged Kiwis to see more of their own backyard. A new domestic campaign will launch in Autumn.

“We will also keep rolling out direct investment from our two tourism support packages worth $600 million in targeted spending. Further details are due shortly.

“We aspire to have the 100% Pure New Zealand brand in the top three most desirable tourism brands for high-quality travelers."

A lot has happened since the protests outside Parliament and the latest political poll, dropping of mandates, fuel excise cut, borders opening etc........funny that.

We've experienced a wave of covid, similar to what the rest of the world has gone through. NZ has been pretty unique for the 22 months prior.

Time for the Marriage to happen, you think ?

hope there won't be a new variant.

Can't wait for the local covid experts to spam every comment section with the latest conspiracy theories.

Anyone remember covid being called "just a flu"?

Well I just had it, for me it certainly wasn't as bad as the flu.  My daughter has it now, she feels perfectly fine

That sample size is a bit small, don't you think?

Indeed but you will find, if you increase the sample size, that far, far, far more people are not in hospital than the very, very, very few (but much talked about) people who are having complications

The hospitalisation rate for active Covid cases is 0.5%.  Currently 1800 people have been hospitalised in 2022, compared to the 6500 who were hospitalised for the flu in 2019 (and that's FOR the flu, not simply testing positive for it after going to hospital with a broken leg).

If using the guesstimates from some of the epidemiologists around how many unreported cases are out there, then the hospitalization rate might only be 1/4 to 1/5th of that?

Agreed, I had the flu 3 weeks ago and it knocked me hard.  Tested negative then.

But tested positive mid-last week, aside from hitting a brick wall every day at 3pm needing a sleep and some high temps it's felt like a standard cold.  But I'm sure being young and double vaxxed has helped.  My 4 year old daughter tested positive on Sunday.  Monday morning high temp and back to normal by Monday night.

Just mindful of survivorship bias, and it's easy to criticize a "pandemic" response in hindsight.

All that's missing is the planned levels of immigration once the borders are open.

Looks like our borders opened up for visa holders earning 1.5 times the median wage starting 14 March; applications for all others open on 4 July 2022. Same old stuff: advertise for a bit then hire migrants.

Thanks Productivity Commission for all your hard work; we'll put your report in our "let's do this" pile along with the Auckland Light Rail business case, supermarket study and TWG recommendations.

Latest from Fed Farmers, urging the application of border exemptions for overseas workers so they can lobby for more.

"If it takes two months to take the 300 slots left,then it will be hard for us to advocate to the government for more overseas workers before calving"

Make it at least double.  Anyone willing to pay back say $50k is desperate for a job and presumably fairly good at the job.  Of course it would be sensible if the visa applicants gave the money to our Govt instead of dodgy employers.  Not to apply to public service jobs such as teachers and nurses.

Haven't there been scores of fraudulent submissions from bank statements to degrees to marriage certificates from some of our largest migrant source countries?

Might as well remove the vaccine certificate requirement to avoid red tape.

There has been no dropping of mandates.  Unless I've totally missed the big announcement (unlikely).

From the headlines, it looks like there will be some announcement made in this regard next week.

Seems unlikely that the government will open up to tourists while keeping the vaccine passport for domestic use (although nothing would surprise me).

There would need to be a robust process for converting your overseas vax documentation into the acceptable domestic format, and it would be a nightmare for tourists if you arrive in the country to find this hasn't worked correctly, or if it takes too long to process before you are due to arrive. I think there is already something in place, but whether there is enough capacity to handle this 'en masse' for tourists (as opposed to returning Kiwis who got vaxxed overseas) is another question.

My money is on the passport system being dropped for domestic use for entry into venues, restaurants etc but possibly kept in place for key employees in key industries like healthcare and education, just before the bulk of the vaccine passes expire.

Well I guess the government wasn't going to announce that Police and Defence Force staff shouldn't be under mandate.

And the mandate is even further weakened surely if health staff are to be pulled back in whilst still positive?

Must be time to drop all the mandates come 1st May. Get rid of the lot, masks the vax passport the works lets get back to normal. If you want to keep wearing a mask that's up to you.

They will drop before the border opens.

Mandates are being ruled unlawful, and the Vaccine Pass is either not enforced, ignored completely, not fit for purpose (Doesn't appear to distinguish between 2 or 3 jabs, and expiry dates are nominal), and none of this can be applied to visitors to the country.

Proof of arrival date and passport should do the job. Still a broken system anyway.

Given the current economic turmoil and uncertainty, and heading into winter, what can we really expect for tourist numbers?

Does NZ stand out as a popular holiday destination in these times?

Current policies are trying to aim for higher "worth" tourists rather than backpackers and working holidayers. NZ is expensive and getting more so, will the tourists still come if they can get more bang for their buck elsewhere?

Many Australians would probably prefer to go to Queensland or Bali over winter, both places are finally open as well.  Along with the rest of the world. A friend of mine has already been to Hawaii to meet up with UK family there.  Big destination holidays are on the agenda after a 2 year absence.

It took our brilliant government days to shut the border, why does it take them months to open it again?