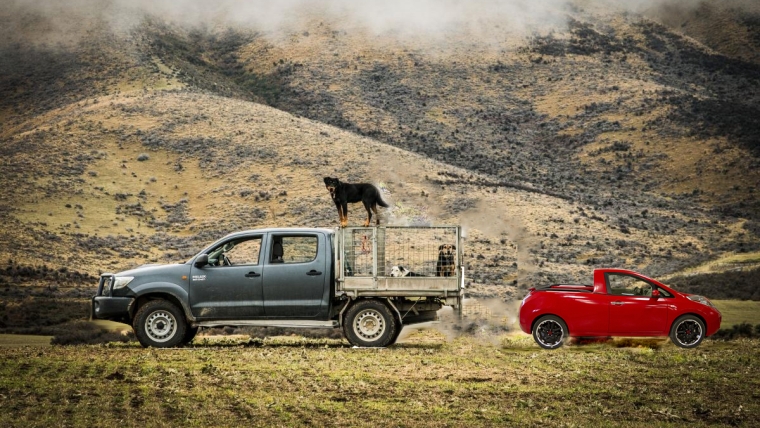 Land owners will be pleased to see the transport sector is coming under some additional pressure to reduce its emissions profile.

The policy, announced on Monday and currently going through the consultation process, is likely to be enacted although a couple years away. The plan is to ‘tax’ combustion engine vehicles with new registrations in 2021 up to $3,000 and subsidise low emission vehicles at a scaled rate with zero emission vehicles getting the full $8,000.

While New Zealand has been lagging well behind other countries' policies regarding vehicle incentives or discouragements, this step will catch us up to some degree.

Unfortunately for the rural and small commercial sectors there are not any options of 4x4 and light trucks suitable to replace what is currently available.

The lack of infrastructure is currently a major disincentive for those living away from main centres.

Elon Musk of Tesla has predicted they will have a car sometime next year with a 650 km range. The catch will be the cost, with most EV about 50% more than combustion powdered vehicles. Given the policy is meant to be a zero sum policy, i.e. paying for itself, government must be planning on a lot of combustion engine vehicles coming in for a while yet. Given the $3000 vs $8000 difference it will require about two and half “gas guzzlers’ to subsidise one EV.

The proposed policy is an acknowledgement that the ETS in its current form is not providing enough incentives to encourage the sizeable shift in our vehicle habits.

At the moment there are 3.2 million combustion engine cars versus 15,000 electric, less than ½%. With the $25 cap on the price of carbon forecasted to stay in place “no later than to the end of 2022” the ETS is not going to be a major driver of change until some lift occurs. Currently the ETS price is a tadge under $23, so, not even hitting the cap at present.

The Productivity Commission’s forecast that a price of $72 - $150 is required to reach a low emission economy, or up to $250 per tonne for zero net emissions by 2050 does appear to be getting some buy-in from the dairy companies. Both Synlait and Fonterra have revealed their thinking in planning for the future. Synlait apparently are basing their short-term plans on a $40 price by 2023 while Fonterra are looking beyond that to 2030 with a $75 - $150 range. Similar to their milk pricing, Fonterra seem to provide themselves with plenty of room in their forecasting.

Even at the lower pricing levels, livestock farmers will have some serious thinking to do in how they may meet those levels. Some hope is being indicated by Agresearch who in collaboration with some international scientists believe they have isolated the microbes and enzymes which create the hydrogen in ruminants’ guts, which other micro-organisms (methanogens) convert to methane. The aim is to reduce the supply of hydrogen, thereby reducing methane. The government believed there would be some technical advancements to ‘help’ livestock farmers, and if this research proves successful this will be one such advancement.

Back to the farm, is fine wool going to be the viable second tier to meat in sheep farming again? John Brakenridge the CEO for the New Zealand Merino Company believes so.

Unfortunately for most farmers this does not include the coarse end of the spectrum, which makes up the bulk of New Zealand’s wool clip. John says that fine wool is on the “crest of a wave”, with contracts for 22micron (just below, i.e. finer than, the mid-micron range) achieving contracts for $20 plus per kg clean. Mid-micron is not too far behind with the 25-28 microns achieving between $10 - $15 per kg. Coarse wool, however, (32-40 microns) are struggling along around $3 clean and as long as uses such as insulation are seen as viable uses it is going to remain in the by-product bracket.

Carpets have been the traditional home for the coarser wools. But having looked at some carpets lately, assuming wool would be our default go to product, I came away thinking that some of the newer plant based products (Rhino) competed very well on all attributes, not just price. This wasn’t what I expected or indeed wanted to hear. The message is not only are the food proteins being threatened by the plant-based substitutes but our floor coverings and no doubt apparel wear also are under threat.

On a different note, congratulations to James Robertson on winning this years' Young Farmer of the Year. Based in Auckland, working as a trade strategist for Fonterra and the youngest contestant to win the prestigious competition, he goes away with prizes to the value of $75,000. The YFY has been going for 51 years now and while not getting the television coverage it did in its hey-day, it still is very popular and over 700 people attended the grand final, which was held in Napier this year.

A Rivian truck will run about $USD70K, so in NZD terms that's well into six figures landed cost without factoring in the charging infrastructure out in the wops. And despite having 14KNm of torque, outta 4 motors - 1 per wheel - I rather suspect that the thing might run outta puff on the far back 40, in a foot of gloop, trying to tow a prize bull out of the gumbo in a frost and after a trip to town without a recharge in between. Big extension cord needed. Range Anxiety to the max. Landcrusier 70 series V8 diesel to the rescue.

Sure, the tech will improve. But betting the farm on EV anything on-farm is high risk for the next decade or so. Uptake will be slow and cautious, as befits a product innovation curve. 8-10% Early Adopters, max.

So you have an opinion not substantiated by any facts, have you ever driven an EV? Be that as it may the assumption is that you have to go BEV when in fact that is not the case, you can go hybrid or PHEV. On top of that there is more to the proposal. The standards being set force the importers to bring in vehicles that meet the EU emission standards and not a lower standard. Will farmers really be impacted that much? or will the impacts be where it really matters the urban "hockey mums" in their massive SUVs dropping the kids off at school? In any event really we have to curb the present course and if there is a cost, so be it.

Not so sure the urban "hockey mum" myth holds. Don't most people purchase their vehicle with a specific purpose in mind, based on their circumstances? We've got two cars - one to transport the 5 grandchildren for school runs, and the other is our open road car (for two), purchased specifically with safety (responsive handling and acceleration) in mind. Both would be caught as high emitters under the present proposal. I'd be pretty loathe to move into a standard compact car given our roads - I suspect that's a big reason many NZers, particular those transporting children buy SUVs..

.. revert back to the little 4 cylinder suzuki jeep.... instead of driving around in a portable workshop. Use a drone to inspect the ranch. Put a 5g go-pro on the bull (a year or two away) and the dog. Saddle up the the horse. Plenty of options out there when you get thinking.

Get the bulls to pull the truck out....

The little Suzuki's are a great choice for EV conversion: the motor/gearbox is coupled to the transfer box with a short jackshaft. Swap out the ICE and gearbox for a suitable DC motor, plonk a controller and batteries around the engine compartment, and you have yerself a nice 4WD EV. There are a few about: check out an EV owners' gathering sometime. I had a Jimny meself once, and it's a twinkle in the old eye for a retirement project.

Another Waymad waffle. Of course nobody has ever run out of petrol because the forgot. No, not ever, none.

Install 3-5 kW of micro wind or hydro on farm and they'll never need to get petrol again.

We have 4.8Kw of solar on the roof, and in the depths of winter, with successions of socked-in days (and no wind), there's barely enough Sunny Electrons issued to run the household baseload of 2-300 watts, let alone charge the 9.8KwH battery. You may have a point with hydro, but the availability of perched water is not exactly universal.....especially if the local Regional Council, wielding the RMA, gets wind (sorry) of it....

So you'd need to pay the $20 to charge it up sometimes? Beats the $100 you have to pay to fill up the fossil combustion vehicles.

Oh, that's Harsh. A mid piss-take, perhaps. Interest threads should be Interesting IMHO, and I happily shoulder the burden of keeping 'em so. Occasionally: unpredictability is a virtue....

To much moaning on this policy. So it's a change, things are different - harden up.
And it you want a big vehicle you can still have it. No extra cost than the price of it's tyres. No problem.

Tyres $1200 inclg gst usually, $1600 at worst. Its not a change at all really. Its more of the same old. Standard charges go up beyond the rate of inflation. Its getting tougher to make a buck. But then sooner or later the price of your food will rise. What goes around comes around. And yes I can see the climate is changing. We used to have 40 or more frosts a year. Lucky to have 20 now. I dont know the answers. Making food more expensive probably isnt the answer.

I just use my Tesla Model-X when I go for a drive through the country side, not sure why these cockies need a diesel vehicle for though? Soon farmers will be obsolete and we can all just enjoy beyond meat burgers while we get on with saving the planet.

Yep - it's going to save the rural sector like the plastic recycling craze saved the oceans. " Given that more than half the world’s cobalt comes from the DRC, that one fifth of it is extracted by artisanal (or informal) miners, and that around 40,000 children work in southern DRC where the cobalt is mined."

"The UN’s International Labour Organisation has described cobalt mining in DRC as ‘one of the worst forms of child labour’ due to the health risks.

Soil samples taken from the mining area by doctors at the University of Lubumbashi, the nearest city, show the region to be among the ten most polluted in the world. Residents near mines in southern DRC had urinary concentrates of cobalt 43 higher than normal. Lead levels were five times higher, cadmium and uranium four times higher."