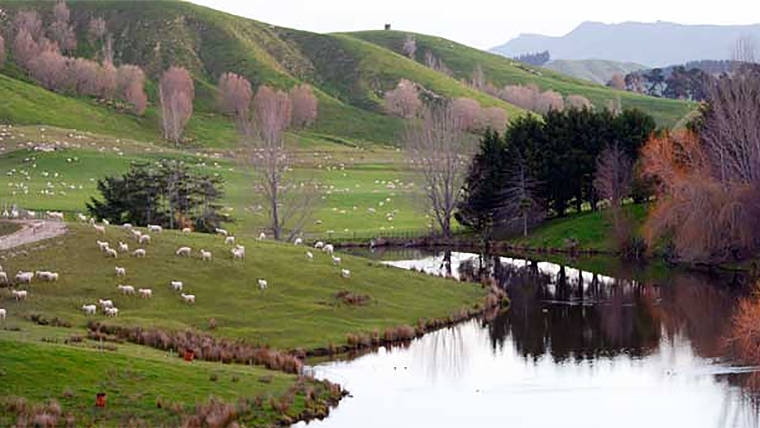 At midnight on 14 November 2016, a magnitude 8 earthquake struck in the Kaikoura region, Ruptures occurred on multiple faults from the North Canterbury High Country to Kekerangu North of Kaikoura, that earthquake has been described as the most complex earthquake ever studied, it caused substantial and wide-ranging land damage across large areas of the North Canterbury hill and high country.

Immediately obvious impacts included damage to farmhouses and buildings, fences, water systems and access tracks. Stresses on people and livestock were very evident, both in relation to the immediate impact of the event, and the sudden unexpected loss of stock water infrastructure and loss of road access for some months after.

The Papatea Fault, one of 24 in the region that ruptured along a system of right-lateral strike-slip faults, in the Kaikoura region, these faults transfer slip from the right-lateral Alpine Fault.

Due to the Kaikoura earthquake there is evidence that the Wairarapa fault line to the north has increased pressure and is at risk of rupturing.

The Wairarapa fault line is responsible for New Zealand's most severe earthquake since colonisation. In 1855, a 8.2 magnitude earthquake caused severe damage across the region and generated a tsunami, so it is important and relevant for all farming communities throughout New Zealand to learn from events caused by the Kaikoura earthquake.

This week on Factum-Agri we move to the Wairarapa to discuss climate change and the impact this is having on one farming operation.

William Beetham is experiencing climatic change, winters are starting to get warmer with less frost events and less average annual rainfall, around 200 mills less of rain is falling on average on his property. Changes to his farming system have been made to accommodate environmental change as well as changes in market conditions and regulatory requirements.

Typical trading periods have changed and there is a focus on farming the shoulder seasons more when feed supply is typically at it’s highest, William finds that Autumn is his biggest risk and Spring feed is reliable even in the toughest years.

Petra Pearce from NIWA talked about the variations of the different areas or zones within the region. Temperatures have increased which supports William's log book entries, reducing frosts and increasing growing days will become more prevalent according to the NIWI’s prediction, NIWA’s predictions also suggests that as sunshine hours increase and we continue to warm we will eventually see increased prolonged drought periods.

Summer 2017-2018 saw Masterton have it’s hottest summer on record and it’s hottest day on record was in January of 2018 which was a blistering 35.4 degrees.

There is no doubt global warming is and will continue to provide challenges for New Zealand farmers.

This has been achieved through a combination of decreasing sheep numbers, from a high of 70 million in the 1980s to around 29 million in 2015, and steady improvements in productivity and performance have resulted in almost the same amount of sheep meat being produced.

Not only have total emissions reduced but the amount of Greenhouse Gas Emissions produced per kilogram of meat has continued to reduce at the rate of about -1% per year.

Beef cattle have had a similar reduction in Greenhouse Gas Emissions produced per kilogram of meat. While there is still work to be done, realistic goals and targets that are workable should be set and equally policy makers need to look at the great work and improvements that have been achieved in recent times, acknowledge the improvements they are there and support and encourage an industry that, quite frankly, does more for New Zealand than any other.

To get the full story listen to or download the podcast above.

" Policy makers need to look ( at ) improvements that have been achieved in recent times". A little while ago I did some research into NZ's livestock numbers over time. We had peak stock numbers in the 1970's with a steady decline since. On that basis NZ farming should be in credit with regard to methane emissions, but that does not suit the powers that be. They are not prepared to accept a pan-industry reduction in stock numbers as contributing to an overall reduction in emissions - they want to see a per farm reduction as well. This is an extreme example of double dipping.

I think you should drill into your numbers a bit further. Yes, there has been a numerical decline in stock numbers however methane emissions have risen per hectare although they have fallen per kg of production per hectare. Numbers on a spreadsheet need to be carefully analysed lest you contribute to the wrong interest group inadvertently.

Hook, I have dug out the numbers I gathered a while ago; in 1972 NZ had 60m sheep, 3m dairy cattle and 6m other cattle. When these numbers are converted to * stock units* , a live weight comparison usually represented by a 55kg ewe, they equate to approx 114m. From 1980 to 1984 sheep were 70m, dairy cattle 3m and other cattle 5m for a total of 118m stock units. In 2015 sheep were 29m, dairy cattle 6.5m other cattle and deer 4.4m for a total of 90m stock units. From 2002 to 2016 land used for dairying increased from 1.8m hectares to 2.6 m, and land used for sheep beef and deer decreased from 10.7m ha to 8.5m ha. The decrease in area farmed has been from 12.5m ha to 11.1m ha, about 11%, whereas the decline in stock numbers ( over a longer time ) has been 24%. In the period 2007-2017 agricultural emissions decreased 0.9%, industrial emissions decreased 2.9%, while emissions from tourism increased 20% and household emissions increased 19.3%. The Paris agreement uses 2005 as our baseline for calculating emissions reductions - individual farmers are expected to reduce emissions on farm accordingly - my point is that overall the pastoral farming sector has been on a steady decline in numbers and therefore emissions for many years, something the powers that be have chosen to not acknowledge.