The progress many livestock farmers have made over many decades has built impressive resilience. As an industry, that has allowed New Zealand to survive COVID well. The urban political classes might be noticing - or is it just electioneering?

The progress many livestock farmers have made over many decades has built impressive resilience. As an industry, that has allowed New Zealand to survive COVID well. The urban political classes might be noticing - or is it just electioneering? 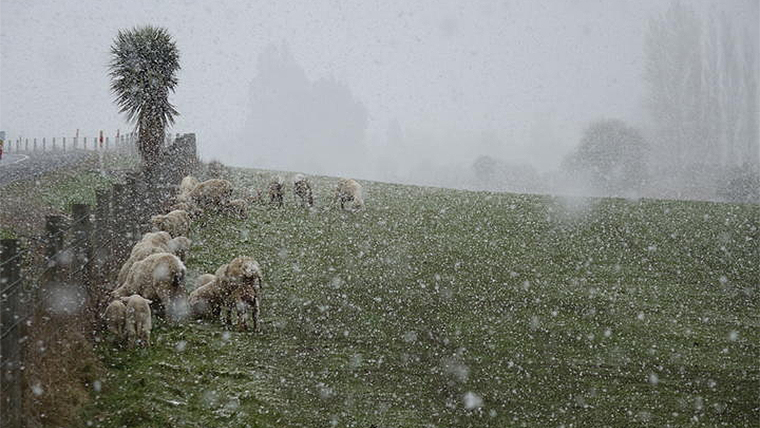 This week I take a look at sheep performance and discuss cold tolerance in ewes and lambs with Jon Hickford from Lincoln University. He is a Professor in Animal Breeding and Genetics at the Faculty of Agriculture and Life Sciences.

I am also talking with farmer Dan Maxwell. Dan’s farm is near Cheviot in North Canterbury it is a 550ha hill country property. He also leases 60ha near Motonau. In total his farming business is approximately 5000 stock units.

This is a farm example that has delivered huge efficiency gains over many decades by practical application of both good genetic science and superior farm management practices. It is a farm that shows how adaption and fast reaction to uncertain weather events can be worked through in a professional way.

The interview with him is an exemplar of how far, how efficient, and how economically beneficial livestock farmers have contributed to the New Zealand economy

In support, Jon Hickford has been at the forefront of developing that science. With the recent cold blast, he describes how their research has taken the cold tolerance challenge and delivered livestock that can meet the market goals in an open pasture-based system.

He has a number of detailed insights in this interview that are well worth listening out for.

He also reports that the urban community has lost touch with farming and it has taken COVID-19 to get them to reassess that drift away.

This same urban community has forced standards on rural New Zealand that they don't adhere to themselves, he observes.

But the growing misunderstanding of the importance of livestock farming to New Zealand has been suddenly reversed, and the election has forced urban politicians into a reawakening of the problem. It is farming that is getting us through the economic challenges of COVID.

The understanding by the Wellington political classes has been very detached, but Election 2020 is bringing it back on to the political radar of most parties.

We wouldn't need "cold tolerant" genetics quite so much if the soft cok sheep farmers would plant some shelter belts in their lambing paddocks. It's been 40 years that I can remember of large (10s of 1000s) lambing losses in the South Island and still no movement on that.
I farm myself and every paddock of mine has substantial shelterbelts to allow the animals shelter from wind,rain and heat - I'm not in the South Island so no snow. IMHO it should be viewed as a an animal welfare issue - there is no excuse

I am the same shelter in every paddock. I think somehow we need to get farmers to see shelterbelts as potential income, you can plant trees four rows wide use hardwoods like eucalyptus and get a good return. We just need to do some work to get the right gum, there are lots of other options besides radiata.
Look at how many trees there are in Europe, forestry is an integral part of the farm system.

Agreed Andrew, the income from well sheltered animals alone is a no brainer - less stress=better growth rate. The income from the trees is just icing on the cake. Time that hopeless organisation (that I don't belong to or actually support) got their s hit together and started pushing the animal welfare side of things a bit harder within their membership. Might get a few minds changed in suburbia if they actually listened a bit more to their end clients.

I planted a lot of shelter belts in the mid 80's and MAF had a guy who was fantastic at practical advice re planting spacing species etc. He was from an orcharding background and funded by Govt. He spent a day with me talking trees, so he had a pretty cool job and I got some seriously great advice.
Sometimes we lose our way and what used to be was better.

Interesting Comments, I am in the south and have a lot of shelter. Would love to know the hardwoods you talk about, I doubt they would grow down here?? I have just exited a lease block that had 4 rows of shelter in every paddock. Worked ok till it got wet and then just a mud bath for the lambs to bath in . Honestly had better overall survival in paddocks with natural tussock shelter. The gums have shagged the soil, blocked the drains and created a huge problem that no on is interested in purchasing. Have just removed a lot of cancer macs and rotten pines, cost less to take them out than what it cost to trim them. While I love having trees they certainly don't create profit down here, more headaches really. Oh and one of the streams I have planted in natives I noticed has just all subsided into oblivion with all this F'in rain.... Never had that problem when the ewes were able to graze to the creeks edge, really wondering what we are achieving here...........

I have also noticed rushes and flax are better shelter for sheep than large trees. Large timber trees are more suited for economic stands of say 5ha or more.

Osty, I agree with your comments re gums. We planted cordata (advised they were the best option) but never again. They have a propensity to fall/lean over as young trees in our soils, clog the drains, etc. Your comment re natives on riparian strips in Southland v grazing to the edge is one that is repeated often. It shows the problem when people with no local knowledge but ill informed theory decide on the rules.

being honest, I think you need to drive around and notice what grows in your area, most trees will like the better soils and shelter. I don't have drainage problems, I have grown Deodar Cedar, Macrocarpa, lusitanica, Robinia, eucalyptus, oak, poplar, willow, various pines, sycamore, flaxes, pampas, ash, beech, atlas mountain blue cedar, redwoods, Totara.

I drive south of here and there used to be lots of hedging, that's in the wet areas, a lot has been ripped out but it looked effective but small paddocks. I had a run in with blackthorn when I was young, so not a great fan, those thorns go through your boot and don't come out easy.
My father always had issues with drains blocking, he cut down some lovely trees Im not sure which had the greatest value, the clays didn't drain that well anyway.
I want enough trees that I can mill if I ever want to built. I look out my window and I see Gums, Macrocarpa( California cypress), some elms ,lots of old man pine, some Pampas, lombardy poplars, some sort of thorn hedging which is trimmed, very little else. So i suppose that's what has survived best around here.

I think, wow you guys are wet, i'm in a 20 inch rainfall area and sometimes a lot less than that. I have mostly free draining soils, some schale, some river gravels a little clay but for some reason it drains well.

I also think planting streams is fraught with problems down the track. I farmed a place years ago where the main stream was planted, every time we had a minor flood the blackberry and crap would end up in the stream with big chunks off the bank. I had a stream where I planted willows, they grew up and then fell into the stream so I ended up with poplars. Then had issues with gorse, I suppose that's why you don't see many trees as you drive about.

I am stopping any further water way planting/fencing. I await with interest what the green mob come back with on Beef and lambs carbon report released yesterday!

Back in the day at Varsity we learnt a lot about the problems with riparian planting. They knew then it was better to keep river banks clear. It allowed sunlight to penetrate the water and kill bugs, it also meant flow rates didnt slow which also helped reduce algae growth etc. I cant believe that was all wrong! So who and why has it become the thing to crowd every waterway with overgrowth?

Our regional council told me it would be better if the sun got into the stream, I pruned the poplars and now lots of sun. Lots of conflicting advice in the rural world.